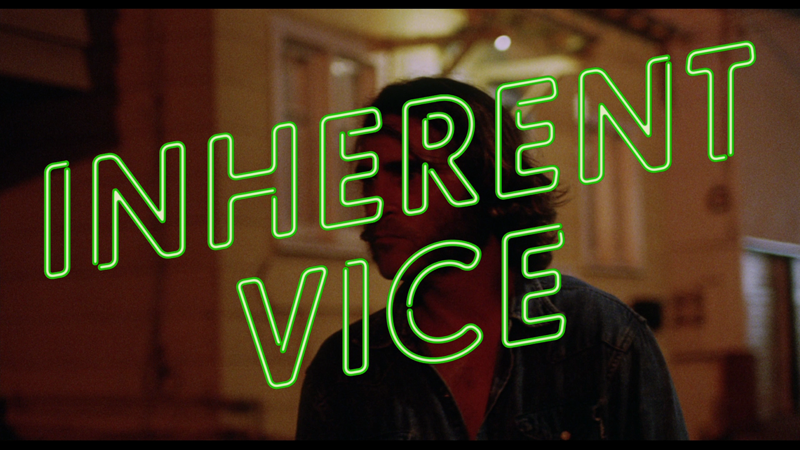 
The Movie
Though Hollywood loves to make movies from books, there are a number of titles that have evaded adaptation, including work from authors like James Joyce, Don Delillo and J.D. Salinger, all of whom have books that, for one reason or another, haven't made the transition to the silver screen. However, the patron saint of the unfilmable is Thomas Pynchon, whose fascinatingly unique novels, like The Crying of Lot 49 and Gravity's Rainbow have made him into the ultimate challenge for filmmaker. Whether due to the length of a book like Against the Day or the density and medium-specific construct of a Mason & Dixon, his books offers great trouble in attempting to make them into movies.

If anyone can handle a sprawling tale involving a large cast of characters, it's the man who gave us both Boogie Nights and Magnolia. At the same time, if that idea has some odd twists and turns, explores unusual relationships and sometimes is more about feel than story, perhaps the director of the criminally-underrated Punch-drunk Love is the guy to turn to. Have a story set in Los Angeles in the ‘70s? Well, you know who we're talking about. So the fact that Anderson wanted to take on Pynchon's late-career neo-noir novel Inherent Vice was a match made in celluloid heaven. The only question that needed to be answered was, could Pynchon be adapted to film? 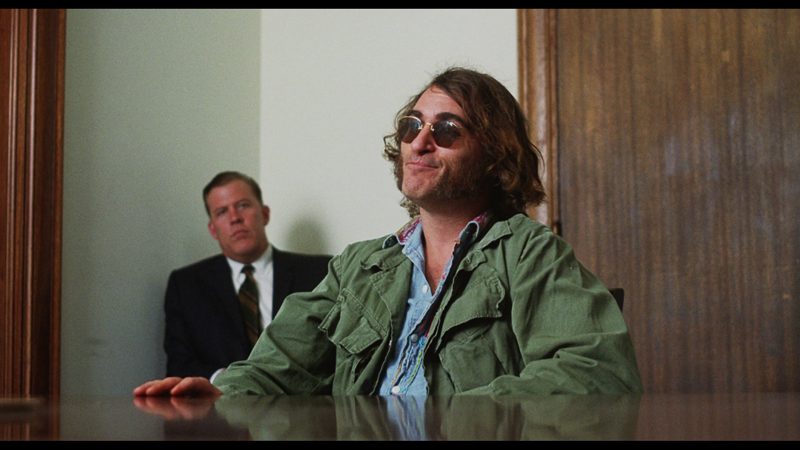 The story is essentially a detective story, as stoner private investigator Doc (Joaquin Phoenix, reteaming with Anderson after The Master) tries to track down his ex-girlfriend Shasta (Katherine Waterston), among others; finding himself going deeper down the rabbit hole as he searches. Soon he's involved with white supremacists, cults, drug organizations and dentists, with no clear path to getting himself extradited from the mess he finds himself in. Is a detective story good if you don't really care if it's solved and if, in the end, you're not quite sure it was? That depends if you're one of those "the journey is half the fun" sort of people.

Of course, you could just call Inherent Vice a character study, rather than a detective story. You'd be completely right. There are plenty of characters to enjoy, as you watch them come in and go out of Doc's life, with Phoenix offering an incredibly terrific performance as the not-always-there star. Jumpy yet mellow, he's often funny, yet utterly believable. Josh Brolin is almost as good as Doc's cop foil, the high-strung Bigfoot, while a host of others are similarly terrific in smaller parts, be it Owen Wilson (playing completely to type), an enjoyable Reese Witherspoon, a familiar Benicio Del Toro and a wonderfully wacked-out Martin Short, who almost steals the movie, sharing a pair of wonderful scenes with Phoenix.

As good as the other performances are, one tops the rest, and she's not even visible for most of the film, and that's musician Joanna Newsom, who gives voice (and brief presence) to Sortilège. A secondary character in Pynchon's book, Sortilège takes over the role of narrator in Anderson's vision, and it's a divine decision on his part, as her vocals create just the perfect tone for the film, a southern California chill infused with a bit of mysticism a bit of cynicism and a bit of love. It would be hard to imagine this film without her.

Newsom's role is just one example of the smart changes the writer/director made in transmogrifying the source material. Loyal readers may miss some of the moments that were excised, but the feel and the characters live on, though some who are unfamiliar with this trippy place where people named Japonica and Shasta snort and smoke and screw their way through life, may find the pace a bit languid and the plot a bit...lacking. But the film is consistently gorgeous and the characters unusual and enthralling, making for an entertaining good time, whether it's the first time you've met Doc, or your longtime friends. 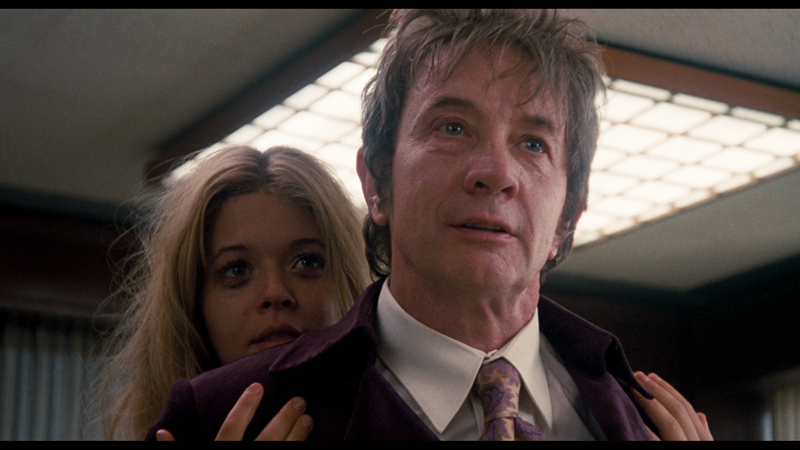 The Discs
Inherent Vice arrives in a two-disc set, with one Blu-ray and one DVD, packed into a standard Blu-ray keepcase with a two-sided cover, which is inside a slipcover that repeats the cover art. The reverse of the cover has a beautiful landscape illustration of Shasta (with the iconic shot of her legs serving as a great alternate cover.) An animated menu offers a choice to watch the film, select scenes, adjust the set-up and check out the special features. Audio options include English 5.1 DTS-HD Master Audio and French, Spanish and Portuguese 5.1 Dolby Digital tracks, while English SDH, French, Spanish and Portuguese subtitles are available.

The Quality
The 1080p, AVC-encoded transfer on this disc here looks tremendous, capturing the beauty of the film's imagery, courtesy of Anderson's collaboration with his regular DP Robert Elswit. Visually, the movie challenges the presentation with a wide range of looks, from beautifully saturated day-lit scenes to sun-kissed moments at dusk, with quality color (including great skintones), excellent black levels and a high amount of fine detail (which isn't tremendously kind to Michelle Sinclair (better known as porn star Belladonna) with sharpness present when the film allows for it. An appropriate layer of grain ensures the film has that cinematic sense, while there are no noticeable digital distractions, though there are a few miniscule concerns, of issue to only the most discerning of viewers.

You're going to need some help from the subtitles, but that's no fault of the 5.1 DTS-HD Master Audio track. That's just thanks to the (intentional) delivery of some performers, particularly the stoned Doc. The audio is gorgeously layered, with dialogue that's well-suited to the moment, solid surround presence (with great atmospheric effects, crisp positioning and excellent dynamic mixing) and low-end effects that are universally effective. Of course, when you've got Anderson working in the ‘70s, music is going to be a major part of the party, and between the score by Jonny Greenwood and the delightfully eclectic soundtrack, it would be hard for this disc to sound bad. And it certainly doesn't.

The Extras
There are four featurettes included on the disc (with a play-all option) but don't get too excited, as three of them, "Los Paranoias" (1:59), "Shasta Fay" (1:11) and "The Golden Fang" (2:11), are simply promos for the film, narrated by Sortilège. They do offer a small bit of additional backstory, but mostly they are just clips from the film.

The fourth (and longest) one, "Everything in This Dream" (5:49), is more interesting, as it offers material that wasn't in the film, though it's not exactly clear what it is or where it came from. Considering the film's trippy nature, it could be a montage of clips from several sections or could be an alternate ending. Take it as you will.

Also included in the package is an Ultraviolet code. 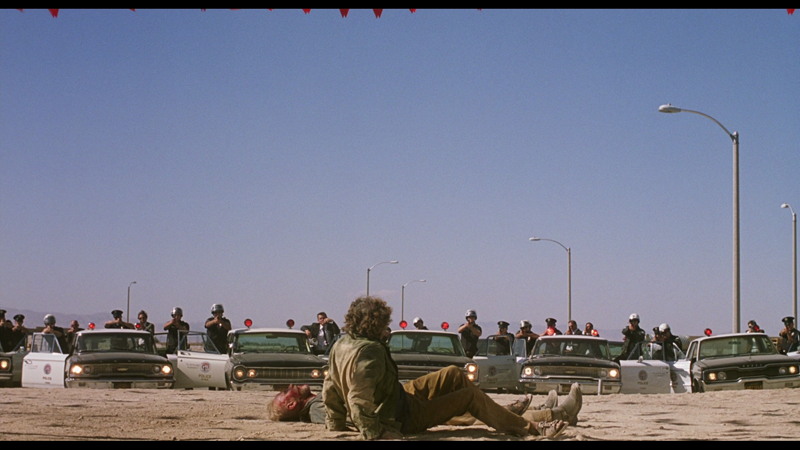 The Bottom Line
Working from a notoriously unfilmable source, Anderson crafted a wonderfully faithful adaptation of Pynchon's hippie detective story that's bursting with stylish filmmaking and great performances, led by Phoenix and Brolin, though some may find the length and loose storytelling hard to dig. The Blu-ray's quality is very high, but the lack of real extras is a serious bummer (we can hold out hope for Criterion one day picking up this fumbled ball.) Anderson fans or Pynchon fans awaiting a film version of his work will have to see it, but owning it is a right-price proposition.