Orange Is the New Black Season 2

After producing a big hit with House of Cards, Netflix solidified their reign over original streaming content with the surprise success of Orange Is the New Black, a one-hour dramedy about a group of colorful characters in a women's prison. While its first season was being put together, Netflix didn't give as much marketing and budgetary love to Orange Is the New Black the way they did to House of Cards, their David Fincher/Kevin Spacey powerhouse. Loosely based on Piper Kerman's non-fiction book about her time in prison, and created by Weeds' Jenji Kohan, Orange Is the New Black became as popular as House of Cards thanks to its counterprogramming, and a fresh and natural approach to prison life, one that didn't shy away from the brutal truths as well as the organic comedic situations of life in prison. 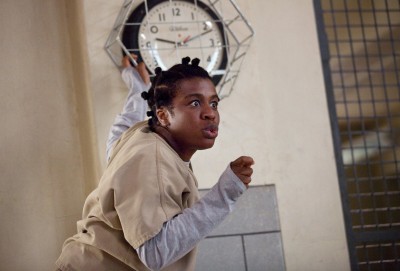 After their "little show that could" turned into a mega hit, the writers must have felt the pressure not to disappoint the show's legion of fans, whose dedication was proven by the vast amount of people dressed up as characters from the show for last Halloween. Instead of doubling down and providing the audience with more of the same, Kohan and his writers sought to shake things up by giving more depth to the characters and adding significantly more conflict. Thanks to their daring approach, Orange Is the New Black Season 2 is an improvement on the already impressive first season.

First of all, the writers must have listened to the audience's criticisms regarding the show's proposed protagonist, the entitled white intellectual Piper (Taylor Schilling), for being too whiny and taking up too much of the center stage amongst so many other, frankly more fascinating characters. Season 2 works more like an ensemble show and gives Piper almost equal footing with the other characters as far as screen time is concerned.

This time around, Piper's journey involves a more existential crisis. During the first season, her goal was to survive prison in order to get back to her old life. Her decisions during this season, some of them liberating, some of them destructive, will obviously now affect her life after prison. Instead of setting up a simple love triangle between Piper, her fiancée Larry (Jason Biggs) and her ex Alex (Laura Prepon), the person who got Piper into this mess in the first place, the writers add more depth to this dynamic by introducing a somewhat inevitable series of betrayals into the mix.

The writers could only allow themselves enough space to skim the surface of the vast array of characters during the first season. Most of them were set up as quirky and eccentric, and that was enough for introductions. The second season allows them to gain more depth, as we get more information on their backstories. We get to find out a shocking truth about Lorna (Yael Stone), a colorful and friendly inmate who's obsessed with her fiancée, one that's enough to have the audience revisit the first season for clues regarding her past. Crazy Eyes (Uzo Aduba) was a fan favorite, therefore she gets more space for development this time around. Set up as not much more than comic relief as a crazy inmate during the first season, the tragedy behind his desperate search for love and approval creates the most tender moments of the second season.

The biggest selling point of Season 2 is the introduction of a deliciously twisted villain in the form of Vee (Lorraine Toussaint), a manipulative and narcissistic drug dealer. There's something about movie and TV villains who can use the power of persuasion over the power of a gun. Nurse Ratchett is the first name that comes to mind. Vee's mental hold on Crazy Eyes drives the main conflict of the season as Toussaint, to use a cliché that admittedly fits here, creates a character we love to hate. (MAJOR SPOILER) Even though I thoroughly enjoyed her departure from the show, it's sort of a shame that she won't be back for Season 3, other than possible flashbacks of course. 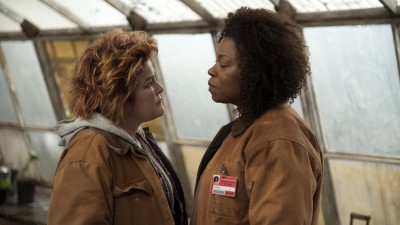 Orange Is the New Black looks stunning thanks to the 1080p Blu-ray transfer. Yes, this show is available for streaming on HD through Netflix, and it's probably not going away any time soon since it's part of their original programming. Yet the audience who appreciates the cinematography of the show, which produces bright colors that pop in front of drab gray backgrounds, should get their hands on the Blu-ray for a less compressed look with more contrast. Also, you don't have to worry about losing your connection speed and having to watch the rest of an episode in pixel city.

The streaming versions already came with lossy Dolby Digital 5.1, but the DTS HD 5.1 track offered on the Blu-ray discs give the show's vibrant sound mix more depth and clarity. Regina Spektor's theme song really shines in DTS and preps us for each episode.

Audio Commentaries: Commentaries with the cast are offered on two episodes, Hugs Can Be Deceiving, and You Also Have a Pizza. The commentaries by Uzo Aduba, Danielle Brooks, Vicky Jeudy, Adrienne C. Moore, and Samira Wiley are very loose and informal. It feels more like hanging out with friends while watching the show instead of informational material.

Back Before the Potato Sack: A 15-minute featurette where the cast and crew talk about the challenges of creating a second season after the show's surprising success.

Orange Peeled: This 15-minute featurette is about the writing process of the show.

A Walk Around the Block: The author of the original book tours the prison set with production designer Michael Shaw. Brief and cute, but not essential.

The Vee.I.P. Treatment: The writers must have been aware of this villain's popularity so they dedicate an entire featurette on the cast and crew's thoughts on Vee.

Orange Is the New Black Season 2 adds a new dimension to a show that already distinguished itself with its unique balance of drama and comedy. The Blu-ray is recommended to those who don't have Netflix, or to hardcore fans who want to enjoy the show in a better HD quality.