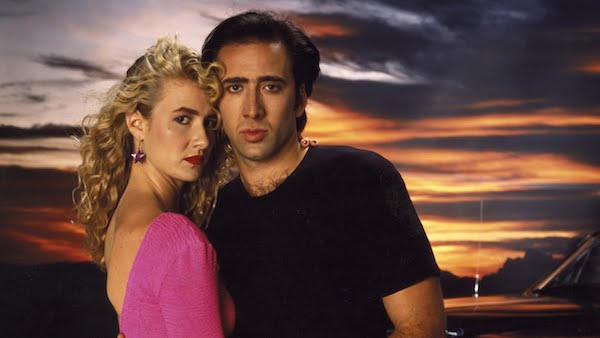 My personal attitude toward David Lynch's 1990 couple-on-the-run cult classic Wild at Heart has been pretty ambivalent over the years. I'm sure it didn't help that the first opinion of the movie that I ever heard was from the notoriously Lynch-averse Roger Ebert, whose review spends more time wringing its hands over the film's depiction of violence than exploring any other aspect. It also probably didn't help that for years, the only version of the movie that I could get my hands on was the cropped VHS release put out by Media Home Entertainment that played in muddy-looking "EP" mode, like a two-dollar public domain title. Even once I saw the film in its proper widescreen aspect ratio with a cleared-up picture, it never quite clicked for me. It didn't have the same uncanny everyday horror of Lynch's earlier film Blue Velvet or the enigmatic touches of his later Mulholland Drive that might have caused it to take up space in my brain after I was done watching.

Granted, Lynch has such a flair for the outsized and grotesque that plenty of images from the film came flooding back to me as I popped in Kino Lorber's DVD reissue and gave it a spin. Nicolas Cage as Sailor, wearing a snakeskin jacket ("a symbol of my individuality and my belief in personal freedom") and stopping a thrash metal concert to serenade his girl Lula with Elvis Presley's "Love Me." Laura Dern as Lula, blissfully re-affixing her top after a vigorous love-making session in a motel that hasn't been upgraded in decades. Diane Ladd as Lula's distraught mother Marietta, covering her face in lipstick after realizing she has sent hired killers after not just Sailor, the man who took her baby to hot rod across the country, but also after a private eye (Harry Dean Stanton) to whom she has grown romantically attached. The grungy, stubby teeth of Willem Dafoe as Bobby Peru, an unsettling "Black Angel" who menaces Lula and tries to get ex-con Sailor to join him on a heist.

These images are strong -- visceral -- but that has always been Lynch's wheelhouse. Examining the parade of odd-looking characters that fill Wild at Heart, such as the platinum-beehived, crippled, Cajun hitwoman played by Twin Peaks' Grace Zabriskie or the crime boss constantly surrounded by topless, servile women (W. Morgan Sheppard), they could be drawings in a graphic novel, putting Lynch a couple decades ahead of the dominant comics-guided aesthetic we have now.

Lynch's other stylistic influences, as ever, seem couched in the '50s and '60s. Diane Ladd's Marietta seems to believe she is living her life in a Tennessee Williams play, or a nice soapy Douglas Sirk melodrama, and I applaud the Academy for giving Ladd an Oscar nomination for this performance and seeing the actor's unhinged hamminess as being a smartly wrought product of the character. Elsewhere, Cage and Dern's star-crossed lovers act like they're in an old B-movie about thrill-seeking juvenile delinquents. Cage has the nihilism of James Dean and the rock and roll spunk and Southern drawl of Elvis, while Dern has the sex kitten appeal of Marilyn, Mamie, and Jayne. Of course, every perfect surface has its dark underpinnings in Lynch's world, so Cage's Sailor is an ex-mob errand boy and murderer (arguably in self-defense) while Dern's Lula is a long-time victim of mental, physical, and sexual abuse.

Wild at Heart won the top prize at the 1990 Cannes Film Festival and made the most money at the box office of any of Lynch's "personal" films. The popularity of the then-current Twin Peaks might have had something to do with that, but it seems likely that the essential straightforwardness of Wild at Heart's plot, coupled with a heartfelt romantic streak and a particularly pro-love ending (undiminished by that highly unusual appearance by Glenda the Good Witch), made sense to more viewers than Lynch's other thematically murky and tonally dark films. I enjoyed revisiting Wild at Heart this time, but I definitely appreciate the ambition of what the film is attempting more than I instinctively love it on a gut level. The exceptional moments, that do receive my gut level love, are the giddy and unreal scenes where Sailor sings Elvis songs and the jaw-dropping exchange where Bobby Peru aggressively seduces Lula (a scene that anticipates the intensity of acting in Naomi Watts's audition scene in Mulholland Drive). The rest seems like a vividly realized road trip through the old weird America that David Lynch loves so much and has brought to the screen better elsewhere.

The DVD
This Kino Lorber Studio Classics edition is basically a less-frilly re-do of the MGM 2004 Special Edition DVD.

The Video:
David Lynch personally supervised an HD transfer of Wild at Heart back in 2004, which has been the source ever since for DVD releases, TV screenings, and even the recent Twilight Time Blu-ray. Looking at it now, does this widescreen 2.35:1 transfer feel somewhat dated? Sure, of course. It's strong, though, with Lynch and DP Frederick Elmes's stylized bursts of color and neo-noir lighting still as strange as powerful as ever. Detail is maybe a bit soft for modern tastes, but that never seems to interfere with the viewing experience. It looks like this disc also has not picked up any extra noise or artifacts on its way to reissue, so the good news is that if you liked the old disc, this one looks pretty much identical.

The Audio:
Here's the big departure from the old DVD and the newer Blu-ray: the 5.1 surround remix from 2004 has not made the jump. Acknowledging that, this disc's Dolby 2.0 stereo mix is quite powerful. Lynch has always been as meticulous with his soundtracks as he is with the visual aspects of his films, and the blend of dialogue, sometimes unsettling ambience, and eclectic music (some of it from Lynch's long-time composer Angelo Badalamenti, some of it from source recordings) is cleanly translated here. The disc offers one subtitle option: English SDH.

(29:56) - The early '00s was such a good time for DVD featurettes. This half-hour retro on the making of the film is fast-paced and slick, but utterly informative and entertaining. Exactly the kind of supplement you want to see after you've just watched the movie.


Final Thoughts:
This new re-release of Wild at Heart offers a good option for folks who don't want to pay too much on eBay for Twilight Time Blu-rays or the old 2004 special edition MGM DVD. This disc looks and sounds above average, and the old bonuses are all intact. The movie itself is an energetic, semi-surreal slice of youthful rebellion, sex, violence, and old-fashioned melodrama that could have only come from one unmistakable filmmaker. If your tastes wander off the beaten path, and somehow you haven't caught this flick, it most definitely comes Recommended.