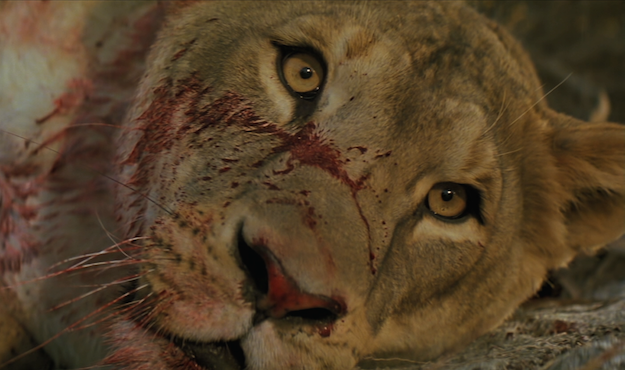 The story behind the making of Noel Marshall's Roar has consistently overshadowed the film, even long before it was released in theaters. (It was released in various countries in 1981, though apparently not in the U.S.) Marshall and his then-wife Tippi Hedren (The Birds, Marnie) felt compelled, after some trips to Africa in the '70s, to help stop the slaughter of lions and other big cats. So they decided they would raise their children -- from both of their previous marriages -- to live around lions and tigers, eventually expanding the menagerie to include wild birds and even elephants.

After more than five years of getting the kids and cats acclimated to each other, Marshall started production on what he intended as a Disney-style wildlife adventure film starring the whole family and their 150 wild animals. The finished product, which took another five years to produce, is a thousand times more unsettling than anything you might see in a Disney flick or in an episode of Born Free. Of course, watching Roar with the knowledge that seventy cast and crew members were hospitalized for injuries inflicted by the animal "stars" -- a fact gleefully trumpeted in Drafthouse Films' note-perfect new trailer created for the film's belated American release -- causes Roar to play more often like a terrifying documentary than a bit of escapist fiction.

The story, as it is, is pretty simple. Scientist Hank (Marshall) is living and working in Africa, in a house overrun by big cats (lions, tigers, cheetahs, leopards, etc.). These are both indigenous animals and ones that he has brought along to see how they interact with other species. When hunter Prentiss (Steve Miller) decides the animals living around Hank's property are out of control and need to be thinned out, Hank asks his native buddy Mativo (Kyalo Mativo) to leave with him and help convince the committee funding his research that the cats must continue to be protected. Meanwhile, Hank's family (played by Hedren, John Marshall, Jerry Marshall, and a teenaged Melanie Griffith) arrives at the homestead to find no humans and several dozen mean-looking animals on the property. Early in the film, Hank tells Mativo never to show fear to the lions or run away from them; unfortunately, his family wasn't around to hear that, so they are stuck foolishly screaming, hiding, and running away from these wild cats for the next hour of screen time, until papa can come home and explain how they've been going about this all wrong.

That story probably could satisfyingly fill a 20-minute short film, but that story is also fairly tangential to what actually occurs in Roar. Noel Marshall notes in an onscreen title that all the animals should get co-writing and co-directing credits, because the story was always mutating based on what the animals decided they wanted to do at any given moment. For example, in the bonus features, elder son John Marshall points out that he accidentally skidded out during a motorcycle chase and then had the bike and himself pounced upon by a half-dozen animals. Seeing this, his father then incorporated it into the story. They were forced to shoot this incident for four more days, to try to get proper camera coverage of the event, with John getting nipped by lions and tigers the whole time.

Earlier in the film, we see Noel Marshall as Hank going to "break up" a vicious fight between two male lions, only to have one of them turn on him and bite through his hand. Soon enough, we see the blood, and the lack of dramatic framing lets us know that that was not planned. But, for the sake of continuity, Hank now has an injured, bandaged hand for the rest of the film.

Melanie Griffith famously had to have facial reconstructive surgery after getting slashed by a lioness during production. Thankfully that footage is not in the film. Knowing that information, though, does make an onscreen encounter between Griffith and what looks like a giant cougar, as it lies on top of her and starts biting her hair, even more tense than the parameters of the scene would dictate.

In a certain respect, Noel Marshall and Co. knew what they were doing. They lived with these wild cats, and understood the basics of their behavior. They also knew the conceit of their film -- a frightened family doesn't know how to behave around these animals -- put them consistently in mortal danger every day for five years. For that reason, Roar has a palpable "Holy Fucking Shit" quality, to quote Drafthouse Films' Tim League. It's a cinematic oddity that is unlike anything attempted before and should not be attempted again. But let me take a moment to say that Roar proves that Noel Marshall, while not a great dramaturge or actor, is actually a surprisingly adept action director. Setting aside the real-life insanity that went into making the film, the many scenes of the family trying to escape from the never-ending barrage of lions and tigers are cleverly staged and shot (by Speed auteur Jan De Bont -- who had his scalp bitten off by a lioness during shooting) and sharply edited (by a crew of cutters led by De Bont and co-star/son Jerry Marshall).

Now that Drafthouse has managed to blow the dust off of Roar and give it a proper American launch, its status as a cult classic is a foregone conclusion. I feel like it's worth noting, however, that unlike Miami Connection (another Drafthouse re-discovery), Roar is not "so bad it's good." Roar shares Miami Connection's outsized ambition and heart, but it is frequently a pretty decent movie. I think only a maniac would show this to young children, but then again, I probably wouldn't teach my kids to fall asleep with lions in their beds either.

The Video:
What the hey!? I'm not totally sure why a new release is coming to Blu-ray with heavy noise reduction, but that is unfortunately the case here. The film's AVC-encoded 1080p 2.35:1 image has lots of grain-obliterating DNR, complimented with a bit of edge enhancement and even some occasional artifacting for good measure. On smaller monitors, it's not so obvious, as the film looks pretty solid otherwise: minimal print damage and stable colors/contrast. But on a big screen, it just all goes soft. Roar is not the kind of film over which it is worth rallying for a new master, but this is a bit disappointing.

The Audio:
If you want roars, this disc's DTS-HD MA 2.0 stereo mix delivers completely. The dialogue is sometimes a little anemic, but the animals and the music -- score by Terrence P. Minogue, songs by Robert Florczak -- come through, sounding big and bold. The disc offers an English SDH track that sometimes tries too hard, as in captions that read, "(Andrew meows curiously)." Really? It just sounded like roaring to me.

Special Features:
- An eye-opening and entertaining rundown of the insane production process for this film. This is no filler, all killer, and a vital companion to the film.

Final Thoughts:
Roar delivers on the promise of its bold advertising. The film is a nerve-jangling thrill-ride, both because of the filmmakers' insane gusto and because its ensemble cast of 150 wild animals never bothered to learn the script. This Blu-ray might not feature optimal A/V quality, but the supplements are downright essential. The whole package comes Highly Recommended.