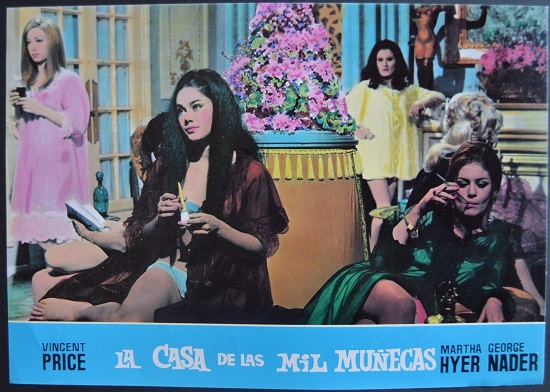 House of 1000 Dolls (credited as House of a Thousand Dolls onscreen) is a not-great, not-totally-awful suspense movie from 1967 that only rarely works as a straight-faced thriller and even more rarely works as salacious exploitation. It's a fanciful take on forced prostitution in which a traveling magic act performed by Felix Manderville (Vincent Price) and his wife Rebecca (The Carpetbaggers' Martha Hyer) acts as a front for a white slavery ring. Price is sadly not given a chance to be particularly menacing or even to work out his acting muscles very much in the film, but his presence does allow for an amusingly dark opening gag in which the newest kidnappee is snuck into the titular brothel inside of a coffin.

Robot Monster's George Nader plays pathologist Stephen Armstrong, on vacation in Tangier with his wife Marie (Ann Smyrner, of the recently reissued Reptilicus). When the Armstrongs' friend Fernando (Sancho Garcia, The Crime of Padre Amaro) decides to go exploring in the underbelly of Tangier to find his missing fiancee, Stephen naturally fears for his buddy's life, but lets him go on anyway. Fernando finds his way to the House of a Thousand Dolls, where he discovers his fiancee Diane (Maria Rohm, wife of writer-producer Harry Alan Towers) is the brothel's newest attraction. He promises to get her out, but before he can get a hundred feet from the front door, four dudes in fezzes thwart his plan -- permanently. The cops call Stephen in to identify the body and ask him to help with their investigation of the prostitution ring. Stephen is resistant, but soon enough, he has to cooperate with the cops when the Mandervilles make his pretty blonde wife the next target of their dangerous disappearing act.

There's a not-bad premise lurking within House of 1000 Dolls, but director Jeremy Summers (The Vengeance of Fu Manchu) rarely lets anything interesting develop between his talented cast members, and the whole film ends up with an stiff and stilted feel to it. Even when the script indulges in some sexy stuff, such as when the "Dolls" are watched from behind a two-way mirror as they primp in underwear and billowy see-through nighties, there's a bland formality to the actors' behavior that makes it far from arousing. When a Doll tries to escape and is punished with a whipping (of course), it's sleazy, sure, but it's also sadly boring.

Apart from the appeal of seeing Vincent Price, even in a subpar flick, House of 1000 Dolls has some additional highlights. Austrian character actor Herbert Fux is quite funny as a roving photographer who knows more than he's saying. A sequence around two-thirds of the way into the film, where Stephen is chased by two henchmen, is surprisingly gripping -- although it climaxes with a ridiculous slapstick moment that feels like a quick fix utilized because the filmmakers didn't know how to end the scene.

House of 1000 Dolls isn't painful to watch, but it's not exactly rewarding viewing either. If you're not a hardcore Vincent Price fanatic, you can probably give this one a pass. 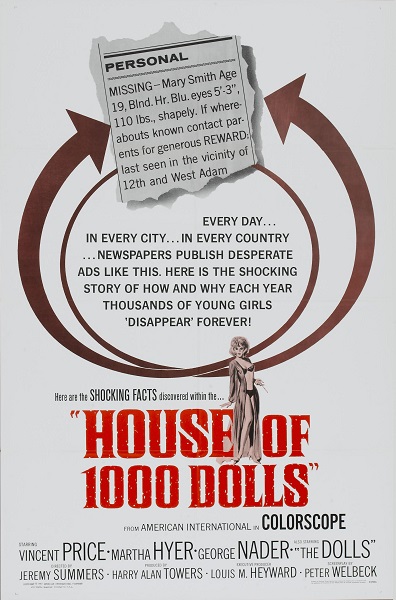 The Video:
There are long stretches of this AVC-encoded 1080p 2.35:1 transfer that look pretty fantastic, with vibrant colors, nicely resolved film grain, sharp detail, and a solid black level. Unfortunately, it seems like the film materials from which the transfer was made are inconsistent at various moments and have not been digitally repaired. That means dirt and specks, some tears and other damage, and even a couple of shots with color temperatures that seem slightly off compared to the surrounding shots. Being unfamiliar with other home video releases of this title, I have to assume this is potentially the best version available -- considering how good much of it looks -- but it's certainly not pristine.

The Audio:
There are some oddities to be found in the DTS-HD MA 2.0 audio for this film, but I have to suspect that most of these issues come from the fact that the entire soundtrack was apparently recorded after the fact and post-synchronized. This means that sometimes the ambience is oddly loud compared to the dialogue, or alternatively, that the dialogue is so prominent in the mix that the characters seem to be speaking directly into the viewer's ear. In the nightclub scenes, the canned applause sounds strange, like an airplane taking off. These are all issues that have probably been with the film since the beginning. I find no faults with the digital transfer, per se. The music by Charles Camilleri is nicely defined with a full, rounded sound. No subtitles.

- If you are unsure if you should pick up this Blu-ray, I would humbly suggest that this commentary is the element that could reasonably inspire a purchase. Del Valle, who knew Vincent Price and interviewed him in the '80s, and DeCoteau, the auteur behind Sorority Babes in the Slimeball Bowl-O-Rama, have a spirited, pause-free conversation that covers a lot of the personal history and backstage antics that surrounded the making of this film. The talk is informative and gossipy, and is far far FAR more entertaining than the feature it discusses. The wild life of producer Harry Alan Towers takes up a good portion of the commentary, and relatively little of the discussion is scene-specific, but it hardly matters. If you're a classic exploitation buff, you'll get a kick out of this.

Final Thoughts:
House of 1000 Dolls fails to shock and it fails to tease. It has its enjoyable moments, but they are few and far between. Hardcore fans of classic exploitation and Vincent Price will love the new audio commentary accompanying the film, but unless you're a completist, I say Rent It. 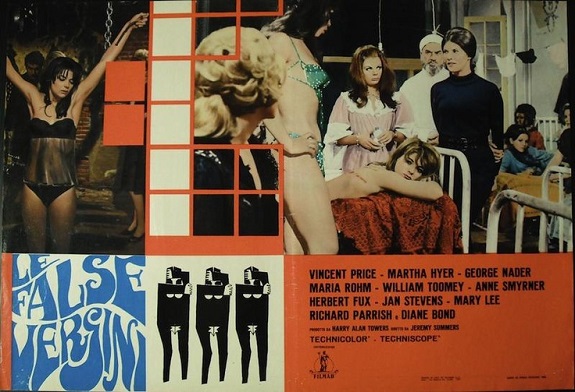