Every once in a while, you come across an older movie that creates a perfect storm of your favorite genres, tones, and styles, that you ask yourself, "How have I never heard of this before?" The Last Dragon is a Motown-produced, intentionally cheesy and over-the-top chopsocky flick that perfectly blends old school martial arts action, urban melodrama, and 80s exuberant soul/pop culture to present a package of sheer ridiculous camp awesomeness. How have I never heard of this movie before? 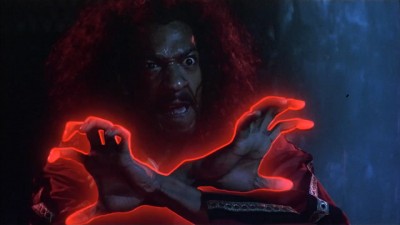 After one of those totally necessary 80s martial arts credits sequences showcasing the best badass moves of the movie's star, the story begins with humble kung fu student Leroy Green (Taimak) finish his long and arduous training by chopping arrows that his master shoots at him in half with his bare hands. Yes folks, this is the logic pushing tone the movie's going for, but we're only getting started, so strap in.

The master tells Leroy that in order to finish his training, he must obtain the last dragon charm from a master called Sum Dum Goy. Yes, I'm aware of the pronunciation, and yes, it's completely intentional. This opening scene seems to exploit the cliché of the wise old Asian master in American kung-fu films without adding anything new to the conceit, but wait until screenwriter Louis Venosta and director Michael Shultz subvert it hilariously during a key scene in the third act.

So Leroy goes back to Harlem in search of the last dragon, and finds himself in a whole heap of trouble after he rescues a VJ vixen named Laura Charles (Prince protégée Vanity) from a gang of thugs, and finds himself as the deadly target of megalomaniac millionaire Eddie Arkadian (Christopher Murney). I love the fact that Arkadian's goal as the bad guy is not to rule the city or to bring the government to its knees. He's an arcade tycoon, on the same level of old rich Caucasian lameness as Noah Vanderhoff from Wayne's World, trying to strong arm Laura so she'll play his talentless girlfriend Angela's (Faith Prince, doing a spot-on Cyndi Lauper parody) music video on her show.

The low stakes of the bad guy's plan allows us to enjoy the film's goofiness on a breezier manner. Arkadian can't swallow his pride after Leroy single-handedly destroys his goons, so he hires a bunch of maniacal murderers to go after Leroy. His involvement as the bad guy during the third act consists of predicting where the climax of the story is headed, infusing the film with self-parody elements that were ahead of its time, but is a mainstay of over-the-top action fare these days.

As original and subversive Arkadian is as an antagonist, he doesn't hold a candle to Sho'nuff, The Shogun of Harlem, who wishes to fight Leroy in order to protect his kung fu dominance. A delirious blend of Ricardo Montelban's Khan and Rudy Ray Moore's Dolemite, Sho'nuff is a proudly narcissistic bully who rolls with a crew that makes him look like a Mad Max parody villain. Portrayed with a totally appropriate scenery-chewing tone by character actor Julius Carry, Sho'nuff is one of the most memorable bad guys in 80s camp cinema. No wonder the character was appropriated by a lot of 90s hip-hop artists, Busta Rhymes chief among them.

Schultz, who helmed some of Richard Pryor's best cinema work in Car Wash and Which Way is Up, finds a nice balance between the exaggerated action sequences and dramatic character work. He knows that the only way to get the audience to take a film full of downright supernatural levels of action and a ridiculous plot revolving around deadly gangs forcing VJs to play bad music videos seriously is to ground the protagonist's personal life in as much reality as the genre's then current confines would have allowed.

I also appreciated the film's subversion of racial expectations. In a typical martial arts flick from the period, the white or sometimes Asian character would be the master, while a black character would be relegated to comic relief. In the case of The Last Dragon, the black characters portray the hero as well as the main antagonist, while Asian characters, such as Leroy's Asian best friend who uses her race to frighten opponents even though he doesn't know how to fight, are comic relief. 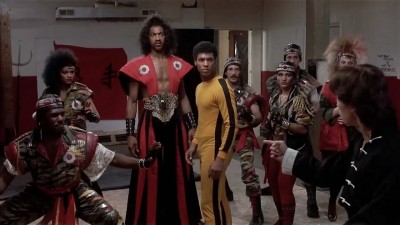 The Last Dragon's 1080p transfer does a near-perfect job of communicating the gaudy colors of the period. No, your TV didn't throw up last night's Jamba Juice. People willingly wore those colors in the 80s. The transfer is clean without too much apparent use of DNR, preserving the film's grainy 80s look.

The dialogue can be heard clearly in the DTS-HD 5.1 transfer, but that's not really what matters when it comes to enjoying The Last Dragon's sound, does it? The most important audio element in the film is obviously the wall-to-wall Motown 80s soul/pop soundtrack. In that sense, the mix doesn't disappoint and represents the songs with power and depth. The classic kung-fu sfx also get some nice panning effects.

Return of the Dragon: A 25-minute retrospective where the cast and crew look back at their work. They mostly talk about the Motown soundtrack and the film's subversion of racial stereotypes.

Commentary by Michael Schultz: You'd expect such a goofy film to have a more irreverent commentary, but director Shultz is dead serious as he informs the audience about his vision for the film and the problems the production encountered. Very valuable for every fan of the movie.

Exuberant and self-indulgent in all the right ways, The Last Dragon is a great example of pure, uncut genre-bending 80s action. I recommend grabbing a copy of this almost perfectly mastered Blu-ray, get some friends together, and have a fun midnight movie experience.