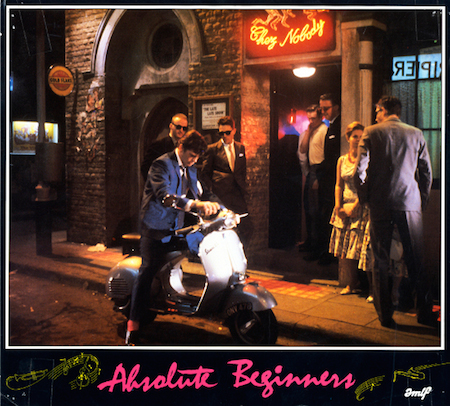 Director Julien Temple's Absolute Beginners is a 1986 rock and jazz musical that combines the soundstage-bound theatricality of Francis Coppola's One from the Heart with the pop-art surrealism of Ken Russell's Tommy and a sprinkling of style-conscious camp in the vein of John Waters's original Hairspray. In other words, it's a heck of a movie to look at and listen to. On the other hand, it's also a little thin on story and character. Depending on your taste, that can be a plus or a minus.

Adapted from Colin MacInnes's 1959 novel, which is reportedly more in line with kitchen sink realism than the candy-colored confection we have here, Absolute Beginners follows teenage photographer Colin (Eddie O'Connell) as he makes his way through the sketchy nightlife of Soho in 1958. He takes saucy snaps for just enough filthy lucre to pay the rent on a rundown ghetto flat, but it's still not enough to satisfy his girlfriend, a dancer nicknamed Crepe Suzette and played by Patsy Kensit (Lethal Weapon 2). Suzette dreams of fame and wealth, and she ends up ditching Colin for a clearly queer fashion designer named Henley (Performance's James Fox) who may not love her but can better keep her in the lifestyle to which she would like to become accustomed.

Colin figures if it's money Suzette wants, then it's money he'll get. So he makes a concerted effort to sell out. He takes promotional pictures of disposable novelty rock acts for a record label, like a pre-teen heartthrob called Baby Boom (Jonas). He also hooks up with a ludicrously plastic advertising man, Vendice Partners, who has the benefit of being played by David Bowie. Bowie's a hoot, with a deep-voiced, sort-of-American accent, and a zippy, show-stopping musical number to act as his manifesto. Colin begins to enjoy having a few dollars in his pocket, but inevitably there's a downside to all of this.

While Colin is out, chasing after paydays, his neighborhood creeps closer and closer toward becoming a war zone. Real estate developers are looking to kick out low-income (read: black) inhabitants so that new luxury flats can be built, so they hire a local gang of pompadoured teddy boys to start inspiring the melanin-rich community to find a new housing situation. Edward Tudor-Pole (aka Tenpole Tudor), who previously appeared in director Temple's Sex Pistols movie The Great Rock 'N' Roll Swindle as a possible replacement for Johnny Rotten, here plays a mush-mouthed menacing Ted who is alternately laughable and terrifying.

In fact, the subplot about the gentrification of Colin's neighborhood is far more effective than the main love story. Maybe this is because the English put so much importance on matters of class that many of the conflicts which occur between Colin and Suzette over their social strata feel a bit illogical to an outsider, while here in the States, we can certainly understand trumped-up racial strife in the name of big business. When the film climaxes in a race riot -- one that naturally takes a few moments for some West Side Story-style dance-fighting -- the artifice finally manages to connect with something that feels emotionally true.

Now, I don't mean to make it sound like I didn't enjoy Absolute Beginners. I definitely did, but it is more of a pleasurable mish-mash of setpieces rather than a resonant narrative. The opening sequence, for example, is a famous feat of bravura choreography for the camera (it's supposed to look like one long take -- as commented upon in the opening of The Player -- but the "invisible" cuts are pretty clear to the skeptical eye).

The film also gets a lot of things right in the music department. Apart from a couple of Bowie tunes, the film also employs songs by the likes of Nick Lowe, The Style Council, Smiley Culture (adding a reggae flavor to Miles Davis's "So What"), jazz singer Slim Gaillard, and The Kinks' Ray Davies. Davies seems right at home as Colin's dad, performing a music hall-inflected number about how his wife is shacking up with their lodgers in a giant set out of a Wes Anderson movie. Elsewhere, Sade shows up as a jazzy chanteuse. Jazz great Gil Evans is credited with the musical score -- he arranged a particularly satisfying version of Charles Mingus's "Better Get It In Your Soul" for an early dance scene -- and even Elvis Costello supposedly contributed a snippet of incidental music. As a Costello freak, I was not able to pick any musical moment out as typical of his work, but the end credits assure me he wrote something somewhere in there.

Absolute Beginners is more curiosity than classic, but it has enough striking and memorable moments to merit a viewing. It also has enough fizzy energy that you might just get hooked and have to watch the film a few more times afterward too.

The Blu-ray
Absolute Beginners comes in a limited edition of 3000 copies. The disc is packaged with a color booklet, featuring an essay by Twilight Time's Julie Kirgo.

The Video:
The AVC-encoded 1080p 2.35:1 presentation is rich and colorful. Blacks are deep, with good shadow detail and no crushing. Fine detail fluctuates a bit, as does the film grain structure. There are flecks and specks. Overall, though, this is a bright and lively transfer. Fans should be pleased.

The Audio:
There are two options. A newer DTS-HD MA 5.1 surround mix that must have been done for European video at some point, since it was not on the old 2003 MGM DVD, and an original DTS-HD MA 2.0 stereo mix. Both mixes boast excellent clarity and no defects. The 5.1 mix does a good job of creating an enveloping ambience with the music, although in some moments I preferred the more "present" sound of the stereo mix. I'm glad to have the option. The disc offers English SDH, which is handy for American viewers, as certain character accents can be difficult to parse.

- DTS-HD MA stereo track that eschews the dialogue, singing, and effects. Useful if you want to do some karaoke. Oddly, the Nick Lowe song that Baby Boom performs is the only non-instrumental on this track (maybe because it's later used again as source music?).

Final Thoughts:
The '80s were a strange time for the movie musical. Though director Julien Temple made his name in music videos, this is far from an "MTV film." Absolute Beginners wears its artifice on its sleeve, but it is too heartfelt and traditional in some ways to be confused for parody or pastiche. Instead, this flick joins the ranks of those mad films that do not quite succeed but are admirable in their ambition. The new Blu-ray looks and sounds great. If you've been curious about Absolute Beginners, there's no better time to check it out than now. Recommended.