Ah, the disaster movie- one of my favorite genres that was big in the 70s with Earthquake and The Towering Inferno and has since come and gone in waves. Nothing like seeing an all-star cast overacting while their city falls into ruins, knowing that most of them will make it out alive and likely patch up some of their long-standing personal issues along the way. I've thought that Earthquake has been due for a re-make, and we sort of get that with San Andreas although this one hits on a much larger scale.

Dwayne "The Rock" Johnson stars as Ray, a first responder for the Los Angeles fire department who routinely performs heroic deeds. At home his family life is falling apart however, since his wife Emma (Carla Gugino) has filed for divorce and is moving in with her new boyfriend, wealthy developer Daniel Riddick (Ioan Gruffudd) with his daughter Blake (Alexandra Daddario) sort of caught in the middle. They had another daughter named Mallory (played by Arabella Morton in a few flashback scenes) but she was killed in a river rafting accident, which Dwayne constantly blames himself for. As our story begins, Blake flies up to San Francisco with Daniel to his headquarters in San Francisco for a visit, with Emma planning to join them a bit later.

At the same time as all of this, Cal Tech professor Lawrence (Paul Giamatti) starts seeing signs of a huge earthquake developing. His team first visits Hoover Dam in Nevada and a quake hits that crumbles the entire place to pieces! Los Angeles gets hit with a huge quake soon after that which topples many buildings and sends the city into chaos, and then travels up the faultline to San Francisco which has already had its share of earthquakes before. Blake is at Daniel's office there when it happens and they try to leave the building via car, but while driving out of the garage part of it falls on top of the car and traps Blake in her seat, and Daniel panics and runs away. She's able to call her mom (who's just been rescued by Ray in his helicopter from a fallen building) and they immediately head for San Francisco to save her. 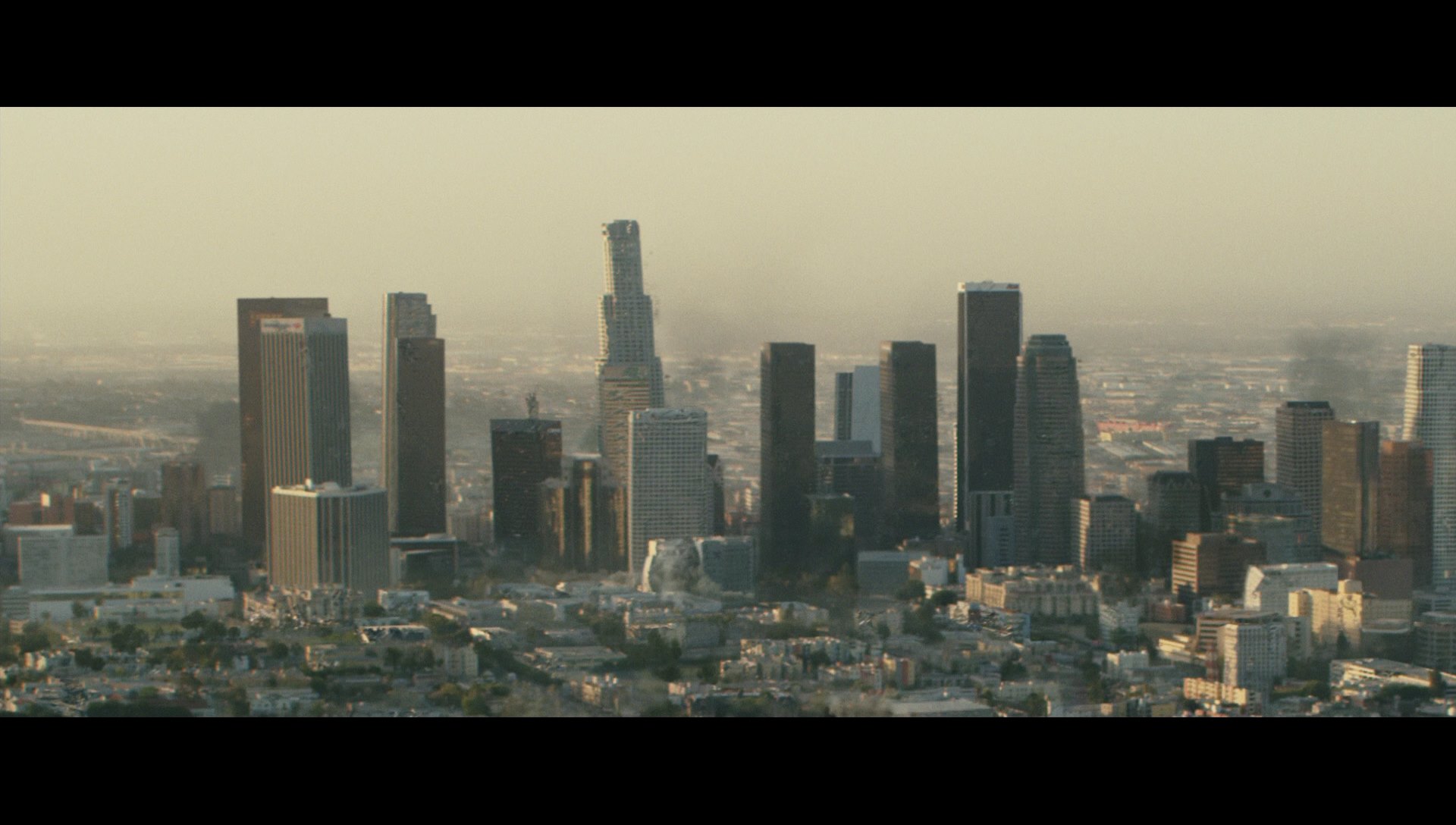 The narrative switches between Ray and Emma, who run into a few obstacles in their journey up to San Francisco, Blake who is helped out of her predicament by a nice guy named Ben (Hugo Johnstone-Burt) who had been there for a job interview with his younger brother Ollie (Art Parkinson) tagging along (he provides most of the comic relief here), and Lawrence as he and his team see that an even bigger quake is on its way which even the East coast will feel and be the largest earthquake on record, and try to warn everyone about it. Like 1974's Earthquake, we're supposed to feel a strong connection with the characters here amidst all the chaos and it comes off only slightly less clichéd than the older movie. We've all seen the estranged couple being forced back together in a natural disaster several times before, and it's pretty obvious that they'll patch things up by the time the movie ends. Ray feels especially pressed to save Blake from any harm since he's already lost one daughter prior- and eventually gets told by Emma "You can't blame yourself for what happened." Where have I heard that line before?

Of course despite the efforts to make us emphasize with the characters, the main attraction here is seeing some natural destruction and we do see plenty of that. The initial Hoover Dam sequence looks just a bit fake with its CG effects, while the two large cities manage to look fairly realistic in some moments. Being familiar with San Francisco, I could recognize many of the locations and they looked quite convincing. It was a bit heartbreaking to see the Transamerica Pyramid lose its top, hopefully they were able to restore it sometime after the end of the movie. 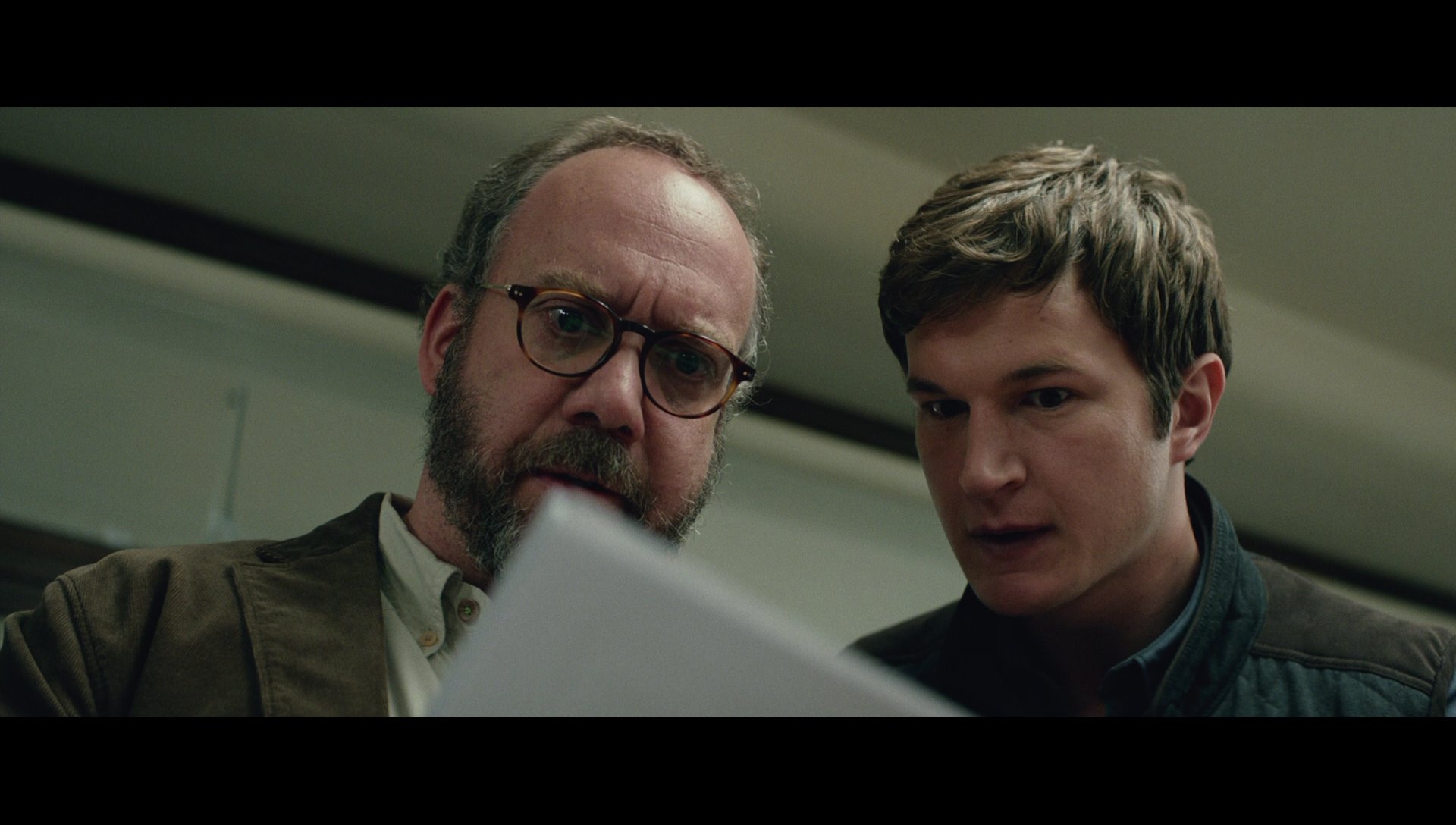 It appears that San Andreas was shot with digital equipment and the movie maintains a film-like appearance with the absence of grain. It was shot in 2D and post-converted into 3D by StereoD- a 3D Blu-Ray is available but only the 2D edition was received here for review. There aren't any obvious gimmick shots which would indicate that this was a 3D movie if you weren't already aware of it and still plays reasonably well in 2D. The Blu-Ray disc loses a few points however for a few compression artifacts present in dark scenes- somehow they did not stand out on first viewing but they were certainly visible as I watched it a second time listening to the included commentary track. A standard DVD is also included, and sampling that the picture quality appeared to suffer a bit- I noticed dancing compression artifacts in the black letterbox bars which I've never seen before on a major studio release. 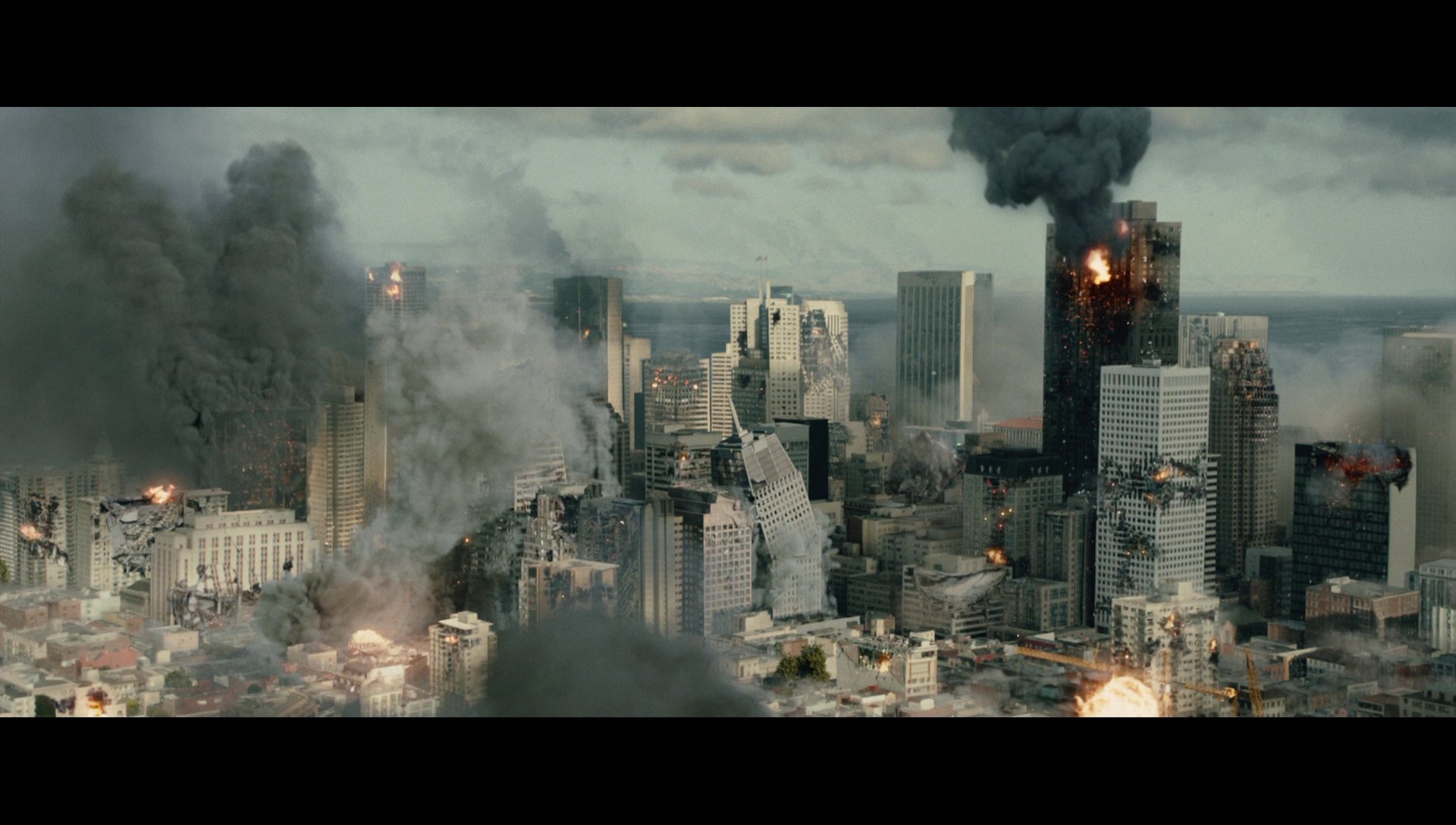 The Blu-Ray soundtrack is in Dolby Atmos TrueHD- I'm not yet equipped for Atmos but the 7.1 mix heard in its absence is certainly no slouch. As one would expect, the earthquake sequences are LOUD, and once again I would like to thank my neighbors for not complaining! Even my rather paltry subwoofer delivered low-frequency effect that I could feel, and the surrounds are on full display, making good use of the extra two channels they're given even with my less-than-optimal speaker placement. As there is a lot of helicopter flying in this movie, that provides some great sound as well traveling around your living room. San Andreas has an impressive orchestral music score by Andrew Lockington as well, featuring choral elements in some intense scenes. 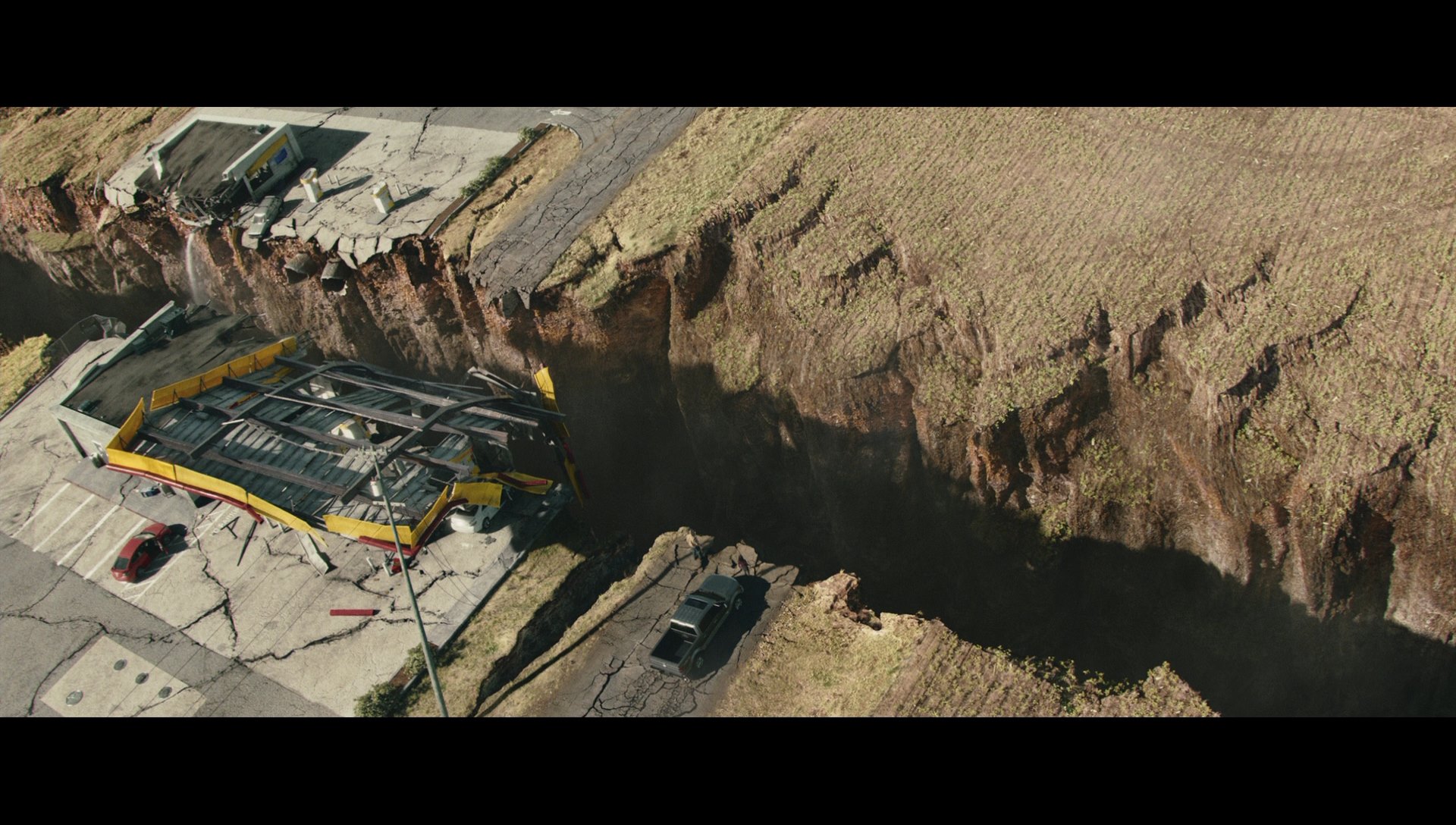 Director Brad Peyton delivers an informative commentary track where he talks about the movie's production, having a lot to say with practically no dead space. He of course gives the requisite "they were great" comments to most of the cast and crew, and puts most of the scenes into context where they were actually shot. About 90% of the movie was shot in Australia, with the city of Brisbane standing in for San Francisco in a few shots although they tried to shoot as much of the real city as possible. Having visited Hoover Dam recently I was surprised to hear that absolutely nothing was actually shot there as filming was not allowed- the shots there prior to the quake hitting looked like the real thing to me. The 3D isn't addressed other than that the scene of Blake trapped in the car looked "claustrophobic" that way. (Peyton also directed the 3D-shot Journey 2: The Mysterious Island which looks great in that format, and the post-converted Cats & Dogs: The Revenge of Kitty Galore which also took place in San Francisco.)

A standard making-of featurette "The Real Fault Line" shows the usual behind-the-scenes, "Dwayne Johnson to the Rescue" focuses on The Rock performing his own stunts with no stand-ins, and "Scoring the Quake" (having nothing to do with the gone but never forgotten 1980s San Francisco radio station of that name) shows composer Lockington at work incorporating a few unusual elements into the music score, including a disassembled piano and sampled audio recorded at the actual San Andreas fault line. There's also some deleted scenes (with optional commentary) including professor Lawrence calling the California governor advising him to call for evacuating the cities, only to be doubted and not wanting to cause "mass hysteria"- something else we've certainly seen before. Finally there's a short gag reel of outtakes and a "stunt reel" of raw stunt footage.

Both discs open with TWO different promos touting the virtues of "digital" movies, one suggesting that physical discs clutter up one's life and that you should use a "Disc to Digital" service to "upgrade" all of them with "Some fees may apply" in small print- implying that Warner has their own such service set up but checking the website just leads you to Vudu and Flixter which have both been around for a while now. You do get a code with the discs for an UltraViolet copy of San Andreas that works with both of those systems, but even Vudu's HDX quality with full bars delivered a picture with far more compression artifacts than the Blu-Ray disc. The studios can push "digital" all they want, but I'm not giving up my discs any time soon. The DVD disc also has some movie trailers: Max, In the Heart of the Sea, The Man From UNCLE and "Justice League: Gods and Monsters". 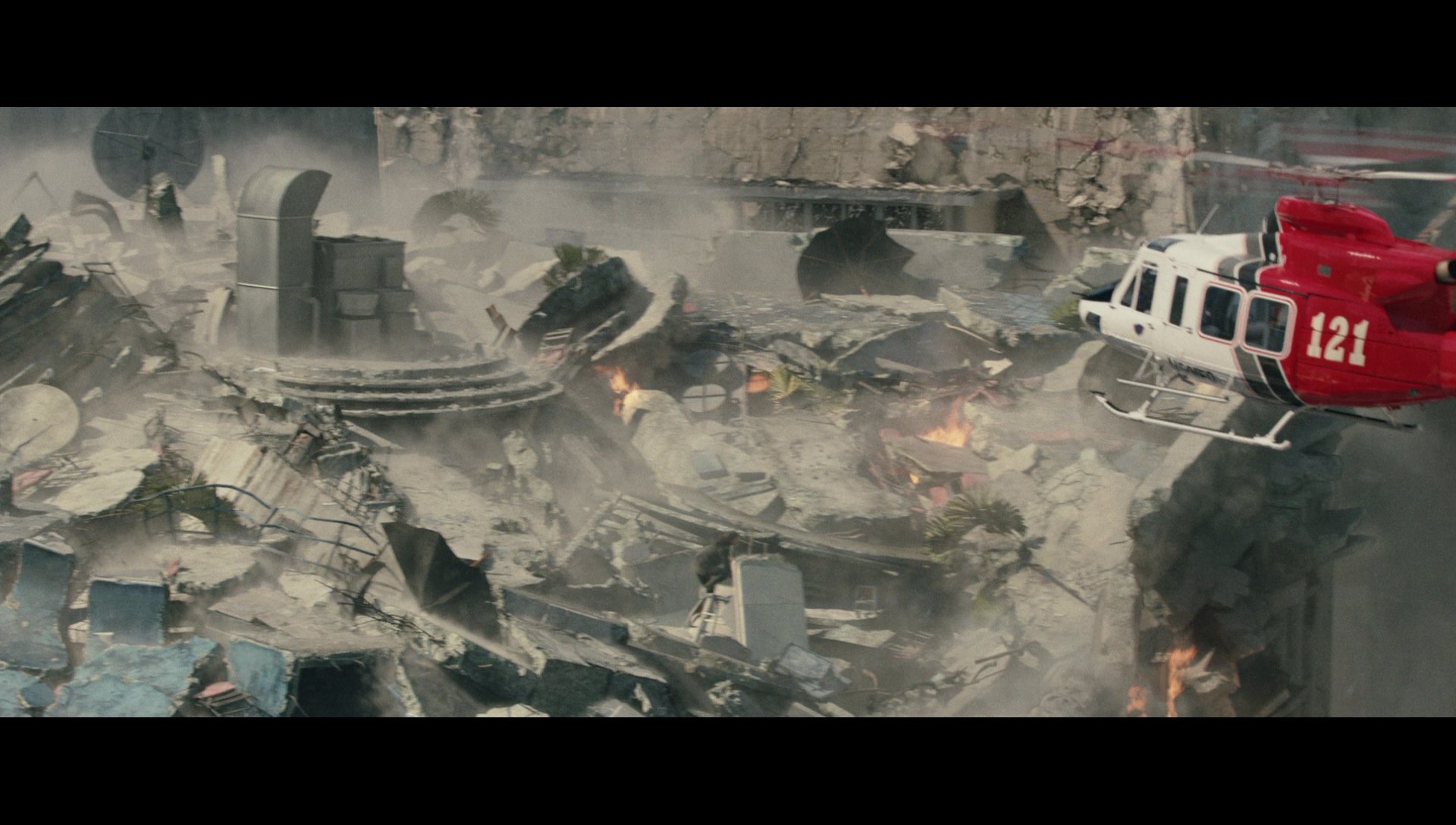 San Andreas delivers most of what you would expect it to- a "popcorn movie" with lots of destruction, with some attempts at characterization that are hit-and-miss. Fans of Earthquake will certainly want to check this out for comparison, and it's a safe bet that if you liked The Day After Tomorrow or 2012 you'll enjoy this too- like those, just be willing to suspend a bit of disbelief for the running time. I would still like to see this in 3D- many of the smaller studios have been issuing their titles in single-inventory with 3D always included. I don't know why the majors can't seem to do the same instead of issuing separate 3D editions, but what can you do. Even without the 3D San Andreas is a fun ride and comes Highly Recommended.