The way to appreciate Jauja is not to approach it as a somber drama/western starring Viggo Mortensen, but to expect a challenging and gorgeous piece of visual poetry birthed by the collaboration between an art-house director and a poet. Argentinean director Lisandro Alonso is known for his unique introspective and experimental approach to the visual language of cinema. Jauja's extremely slow pace, combined with its purposeful lack of dialogue and conventional narrative turns it into art house fare that might frustrate even those in the audience who appreciate similar challenging material. 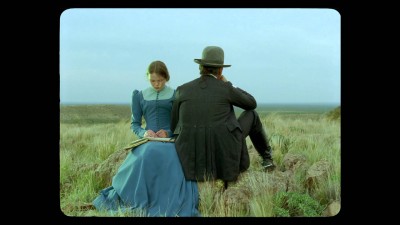 Jauja represents my first experience with Alonso's work, and research shows that even the existence of the absolutely minimalistic amount of dialogue and plot represents a new ground for the director, who's previously known for strictly more experimental outings. Co-writers Alonso and Argentinean poet Fabian Casas set out to create a piece of cinematic poetry that they themselves pretty much admitted to not fully understanding while making the film. Combine these two pieces of information, and it becomes pretty much guaranteed that you'll be bored to tears and will actively hate Jauja if you don't approach it in a specifically open-minded that negates any demand for the whole endeavor to make any sense. The most simplistic way to depict Jauja's style would be to describe the first two acts as being influenced by Tarkovski, before diving head first into David Lynch's trippy dream logic.

The film's first act is where we get the most amount of story and exposition, so if you find this section to be already lacking in conventional narrative, I'd shut it off immediately. In Argentina during the late 19th century, Danish Captain Gunnar (Mortensen) tries to protect his daughter Ingeborg (Viilbjork Malling Agger) from the sexual intentions of the brute and borderline barbaric Lieutenant Pittaluga (Adrian Fondari). Unbeknownst to Gunnar, Ingeborg is in love with another soldier, and runs away with him, forcing Gunnar to dive headfirst into the unforgiving wilderness in search for his daughter.

From this point on, the pacing becomes deliberately slower and slower as Alonso asks the audience to soak in the godless majesty of the undiscovered flatlands. As Gunner loses his grip on reality thanks to the effects of dehydration and isolation, he begins to see visions of a lost dog and a mysterious old Danish woman. All of these minimal story elements eventually lead to a jarring and cryptic finale that reminded me of the unsettling yet fascinating climax of Robert Altman's 3 Women.

Even though almost the entirety of Jauja takes place in desolate vast open lands, Alonso manages to infuse his film with the immediacy and intensity of a stage play. We get mostly long and static shots, allowing us to appreciate the lack of power man really has on nature. 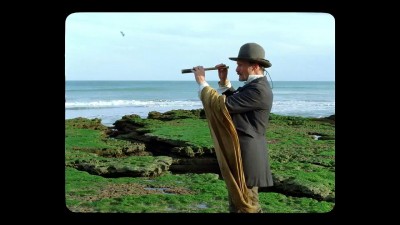 Jauja was shot with an academy ratio that also smooths out the corners of the frame in order to give it a look similar to the first days of cinema. Jauja's 1080p Blu-ray presentation does a great job staying completely loyal to the filmmakers' intentions by inserting tiny black bars on the top and bottom of the screen in order to fully represent the frame's smooth corners. A zoomed-in approach to give a strictly square look would have undermined the film's vintage aesthetic, in which the unique frame choice plays a big part. Jauja has a very odd color palette that fully utilizes the bright colors of the natural environments it uses, while sucking out all warmth from those colors. This approach leads to unsettling, almost dream-like visuals, which probably was the artistic goal in the first place.

For a film that almost doesn't contain any music, save for a brief nighttime scene, and is very light on dialogue and sfx, it's hard to defend the choice of a 5.1 mix for such understated sound work. Yet that's exactly why this audio transfer works, because the surround presentation, full of extremely subtle ambient sounds, fully immerses us into the film's oddly captivating atmosphere. The DTS-HD 5.1 track found on this disc is nearly perfect, with an impeccable representation of the film's subtle sound mix.

Untitled (Letter to Serra): A very slow-paced 23-minute short film by Alonso that ends with him reading a letter that sets up the characters in Jauja. Worth sitting through for the intellectual context this short gives to Jauja as a whole.

Untitled: A one-minute shot of an owl Alonso created as a teaser for the BAFICI Film Festival.

Press Conference: This 50-minute Q&A session with Alonso and Mortensen was conducted after Jauja's screening at the 52nd New York Film Festival. Alonso and Mortensen mostly talk about the production process while pretty much admitting that they themselves don't have a complete grasp on what Jauja's really about.

We also get a Trailer and a bunch of Trailers from other Cinema Guild releases. The Blu-ray also comes with a Booklet with an essay on the film by Argentinean film critic Quintin.

"What the hell is going on?" will probably be a recurring question fermenting in the minds of even the most seasoned fans of art house cinema while watching Jauja. The film represents a freeform experience that can be frustrating at parts, especially during the second act when the already slow pace comes to a screeching halt before picking up with a hallucinatory and deliciously enigmatic third act. But if you let Jauja's visual poetry captivate you from beginning to end, you'll be highly rewarded.