Kino // Unrated // September 22, 2015
List Price: $29.95 [Buy now and save at Amazon]
Review by Stuart Galbraith IV | posted September 25, 2015 | E-mail the Author
At long last The Satan Bug (1965), director John Sturges's film of Ian Stuart's (a pseudonym used twice by Alistair MacLean) 1962 novel, adapted by James Clavell, can at last be appreciated as the above-average science fiction thriller it is. Before Kino Lorber's new high-def Blu-ray, home video audiences were stuck with MGM's poor manufactured-upon-demand DVD, enhanced for widescreen but up-rezzed from a 4:3 letterboxed source. That transfer was so awful this reviewer gave up after the first 10 or 15 minutes.

MGM's new transfer, however, looks splendid, a must in this format short of a pristine 35mm presentation because Sturges and director of Photography Robert Surtees use the 2.35:1 Panavision screen shape so well, and because the excellent use color and added clarity of high-definition greatly enhance the viewing experience.

The picture, about the mad search for a doomsday bioweapon capable of destroying all life on earth within a matter of weeks, is like the missing link between two other sci-fi thrillers: The Magnetic Monster (1953), a low-budget but restrained and very intelligent thriller (despite the lurid title) about an out-of-control artificially created radioactive isotope threatening earth's existence, and The Andromeda Strain (1971), Robert Wise's vastly underrated film of Michael Crichton's novel, about a deadly extraterrestrial organism perhaps deliberately brought back to earth aboard a satellite for biowarfare use.

The Satan Bug has the cinematic sweep and slickness approaching The Andromeda Strain, though its story and mostly apolitical script more closely resemble The Magnetic Monster. Besides the superb high-def transfer, the disc includes an unusually observant, info-pact audio commentary by DVD Savant Glenn Erickson. 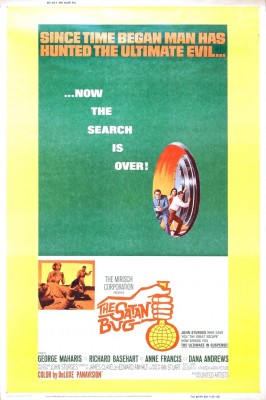 Authorities engage reluctant former intelligence agent Lee Barrett (George Maharis), joining several other nervous agents (including Richard Bull and Simon Oakland). Their concern, shared by scientist Dr. Hoffman (Richard Basehart), is that the intruders might have stolen deadly vials or exposed the lab to one of the two deadliest bioweapons at the lab: a strain of botulinus, which oxidizes and becomes harmless after eight hours, and a newly-developed doomsday virus called "The Satan Bug," capable of wiping out all life on earth within eight weeks. In a very well-crafted sequence, the men are forced to wait out a time-locked vault securing the laboratory where the bioweapons are held (or may already be gone) from the outside world. Once unlocked, Barrett has no choice but to enter the lab in a HAZMAT suit and inspect the lab; if the Satan Bug has been unleashed he's a dead man walking.

In fact, all vials of the botulinus and the single one containing the Satan Bug have been taken, and the rest of the picture revolves around Barrett's investigation, supervised by General Williams (Dana Andrews), father of Barrett's old girlfriend, Ann (Anne Francis), to get them back before they kill millions.

Eventually Williams receives a telephone call from reclusive millionaire Charles Ainsley, who threatens to unleash the viruses unless Station Three is destroyed and its bioweapons development program scrapped.

The longish film, 116 minutes, was criticized at the time for being too talky, but The Satan Bug's dialogue scenes are, in one sense, the best thing about the picture. The talk is intelligent and logical, well acted by talent that really knows how to sell the threat and the intrigue. Once the film introduces more conventional "ticking time bomb" action and suspense, The Satan Bug becomes less interesting, and the climax is notably anticlimactic, in some ways bordering on comic. Sturges, preoccupied by preproduction issues on The Hallelujah Trail while shooting The Satan Bug, treats the early and dialogue-filled scenes with a care missing from the mostly perfunctory action later on.

The Satan Bug is also awkwardly apolitical. Few question the morality of creating these deadly superbugs in the first place, or dismiss such practices as necessary in the then-current Cold War climate. That a simple overlooked security issue might have the U.S. Government responsible for destroying all life on Planet Earth is a non-starter. But the dialogue is good otherwise, and the general approach notably more sober than MacLean's novel, a deliberate attempt to ape the Ian Fleming Bond novels. Clavell's adaptation wisely dials back many of its excesses.

And it's still a very handsome movie, especially considering its very modest $1.8 million cost (definitely not $6 million, as reported in some sources). Sturges saved a lot of money by eschewing big-name stars: though Basehart, Francis, and Andrews all had significant film careers, by 1965 they along with Maharis and everyone else in the cast was at that point primarily working in television. He certainly must have gotten his money's worth: an actor like John Anderson, so prominent in the first half-hour, probably cost no more than five grand for what would have been 10 days' work at most. Basehart, weeks away from his long Voyage to the Bottom of the Sea, is especially good, as are Anderson and Bull, the latter in what was by far his showiest movie role. The movie cheaps out a bit toward the end, suggesting a mass evacuation barely even glimpsed at all.

Aiding the film enormously are Herman A. Blumenthal's laboratory sets and exteriors, modest in size but colorful and generally believable; and Jerry Goldsmith's eerie score, as well as De Patie-Freleng's Saul Bass-esque title design. (I thought it was Bass's work, until I saw their credit.)

After MGM's awful MOD DVD, Kino Lorber's 1920 x 1080p Blu-ray is a revelation. It looks great, with superb detail, color and contrast. The DTS-HD Master Audio (English mono only) is also top-notch. No subtitle options and the disc is Region A encoded.

A few days ago I received a hilarious email from a pal complaining about what sounds like an alarmingly inept commentary track/interview done for Empire of the Ants. According to this pal, the moderator was totally unprepared, lacking even the most basic knowledge of film history, to say nothing of geography, science, and a host of other subjects. Contrastingly, Glenn Erickson's audio commentary track does everything exactly right: it's packed to the gills with background on the film's source material, it puts its primary creators and cast into career context and the picture's subject into historical-cultural context. It's full of interesting observations, comparing elements to those found in other sci-fi films and director Sturges's own movies. It has a nice, personal touch and is never, ever dry or dull. An original trailer is also included.

Flawed but handsomely made, well acted and intriguing, and now boasting a peerless transfer, The Satan Bug is Highly Recommended.