Return of Count Yorga, The

Shout Factory // R // October 13, 2015
List Price: $26.99 [Buy now and save at Amazon]
Review by Stuart Galbraith IV | posted October 14, 2015 | E-mail the Author
A sequel to Count Yorga, Vampire (1970), The Return of Count Yorga (1971) is an interesting if low-budget effort, made by hands who understood the genre and brought to it many fresh concepts. With the major film companies sub-licensing most of their classic libraries for Blu-ray these days, Count Yorga's adventures are curiously splintered: The Return of Count Yorga is a Shout! Factory release (via their Scream Factory line) while the original film, Count Yorga, Vampire arrives simultaneously on another label, Twilight Time.

Michael Macready and Bob Kelljan produced both movies, with the latter directing and co-writing them. The movies sprouted from the then-current trend of ambitious actors like Warren Beatty, Dennis Hopper, Jack Nicholson, Henry Jaglom, and others to write, produce, and direct their own movies. Macready, the son of longtime character star George Macready (who makes a cameo in The Return of Count Yorga, his last film), and Kelljan had both been actors themselves, primarily on television. Yvonne Wilder, who co-wrote the screenplay with Kelljan, was also an actress, playing the deaf-mute in this film. Besides Macready, a few others in the cast and crew have other Hollywood familial connections: Bill Marx, composer of the picture's interesting score, is the son of Harpo Marx.

Shout!'s Blu-ray offers an excellent transfer and some good extras, including a commentary track. 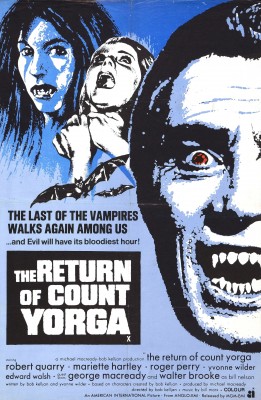 The film opens with several very effective, mood-setting sequences. In the first, Cynthia Nelson (Mariette Hartley) and Reverend Thomas (Tom Toner, a bit hammy), teachers at Westwood Orphanage, discusses the Santa Ana winds picking up as the sun sets, the latter believing the winds to be an evil omen.

Meanwhile, orphan Tommy (Philip Frame) wanders into a forgotten cemetery. There, vampire women rise from their graves while a terrified Tommy runs smack into the arms of erudite vampire Count Yorga (Robert Quarry).

Yorga, who has moved into the manor house next door, apparently intent on feeding on the staff and children at the orphanage, turns up at the orphanage's fund-raising costume party, where many assume he's costumed as a vampire. This leads to a lively debate between Yorga and the orphanage's staff, particularly Dr. David Baldwin (Roger Perry, a fixture of early ‘70s AIP titles), Cynthia's fiancé, on the subject of vampirism. Yorga instantly falls for the ethereal Cynthia.

Later that evening, in another well-done sequence, Yorga and his vampire harem descend upon the Nelson household, the women gruesomely feeding upon her father (Walter Brooke), the principal, her mother (Helen Baron) and sister, leaving only deaf-mute Jennifer (Wilder) and the already transformed Tommy alive. Cynthia, unbitten, is whisked away to Yorga's manor, and through hypnotic suggestion made to forget the nightmarish attack.

Predating the seminal TV-movie The Night Stalker by a year, The Return of Count Yorga is a mostly successful attempt to bring Victorian concepts of vampirism to the present day. The film makes some interesting choices in this regard: the attack on the Nelson family perhaps deliberately evokes the Manson family murders of August 1969, for instance. Also, like Richard Matheson's clever, witty script for The Night Stalker, it takes a basically ludicrous concept - Old World vampire in modern-day Los Angeles - and makes it adequately believable. In The Return of Count Yorga, the film hedges its bets with a bit too much humor in its final, grim reel and one sting too many at its tail, but overall the movie is above average, especially considering its modest budget.

Distributor American International Pictures (AIP) was delighted with the first film's success. Vincent Price, the company's biggest star since 1960, had been increasingly unhappy, and for a brief time AIP saw Robert Quarry, another American-born actor with mid-Atlantic bearing, as a possible successor. Quarry and Price were eventually teamed, sort of, in two films, Dr. Phibes Rises Again (1972) and Madhouse (1974), where the normally sociable Price took an instant dislike to Quarry and his reportedly inflated ego. Quarry has a good mellifluous delivery like Price but is much more limited as an actor, even stiff and one-note. After that brief flirtation with horror movie stardom, poor health, accidents, and a mugging left him weak and almost unrecognizable, but director Fred Olen Ray kept him busy during the 1990s in a series of extremely low-budget films prior to Quarry's death in 2009.

Rather than Quarry though, the best thing about The Return of Count Yorga is its willingness to experiment here and there, mixing traditional Gothic horror iconography with some "fresh blood." The obvious sympathy toward the actors enhances some of the performances, particularly Mariette Hartley's, who was always sincere in the fantasy-horror-science fiction titles in which she infrequently appeared.

Some ideas work and other don't at all. Yorga's lunging straight toward the camera in several attacks is visually startling, but the vampire women tend to look a little ridiculous, too locked into early ‘70s fashions and hairstyles to be effective. Wilder's deaf-mute character is intriguing, but why would she keep a conventional rotary-dial telephone in her home?

Shot for 1.85:1 widescreen exhibition, Shout!'s 1080p transfer is essentially flawless and the image looks great. The DTS-HD Master Audio (English only with optional English subtitles) is also fine. The disc is Region A encoded.

Supplements include an audio commentary track with actor Rudy De Luca and film historian Steve Haberman; a trailer, TV and radio spots, and a photo gallery.

Not great but above average for its type, The Return of Count Yorga is Recommended.

Stuart Galbraith IV is the Kyoto-based film historian and publisher-editor of World Cinema Paradise. His new documentary and latest audio commentary, for the British Film Institute's Blu-ray of Rashomon, is now available while his commentary track for Arrow Video's Battles without Honor and Humanity will be released in November.