In this long-awaited fourth movie in the Jurassic Park franchise, the first movie's dream of putting genetically-engineered real live dinosaurs on public display is finally realized. After a few false starts where initial visitors were eaten by out-of-control beasts, the Costa Rican Island of Isla Nublar where the original park was built is now home to Jurassic World- a high-tech destination for travelers from all over the world where a variety of dinosaurs cloned from preserved DNA are on display in zoo-like habitats. There's even a petting zoo for the kids with friendly baby dinosaurs. The park's entrance is enhanced with a Downtown Disney-like row of stores and restaurants with an on-site hotel that looks out over everything. It's still run by InGen Corporation, who might have made a few bad decisions beforehand but now seem to have gotten it right- the dinos have been on their best behavior and they're all implanted with tracking devices which let those in charge know where they are and remotely kill them should they go on another rampage. 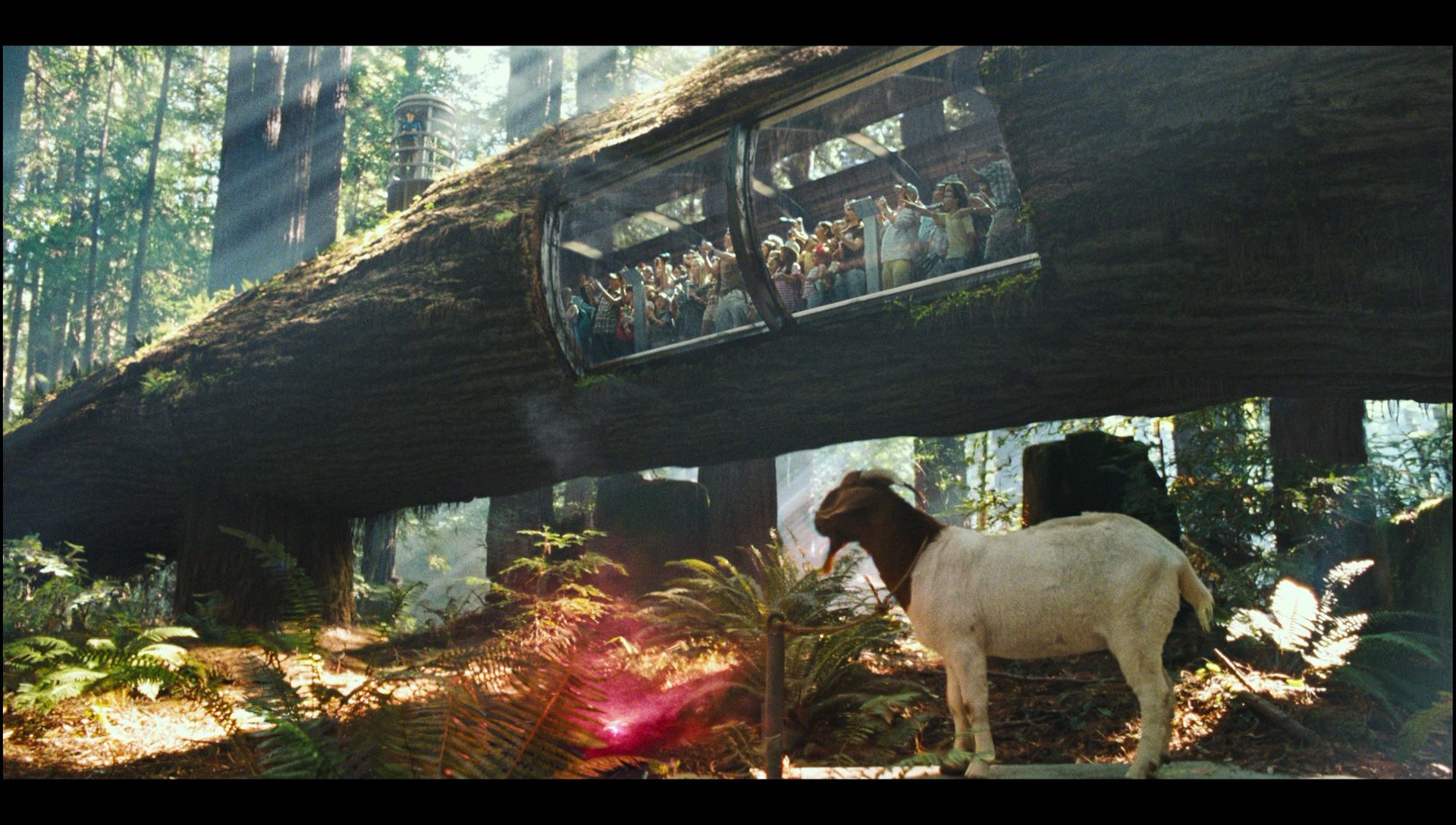 Still, this isn't quite enough to keep the bean-counters happy. After being open for ten years, they still get a good number of visitors but the novelty of live dinosaurs has worn off for many. Park Operations Manager Claire (Bryce Dallas Howard, Ron's daughter) needs to "reinvigorate the public's interest" and secure more corporate sponsorships so the scientists take their act a step further by creating a new type of dinosaur, the Indominus Rex, combining elements of the garden-variety dinosaurs into something that's never existed before. The only problem here is that the new creature turns out not to be very nice, failing to bond with any humans and she soon escapes the enclosure she's been raised in. Once out she not only is set on killing and eating the human tourists but also the fellow dinosaur residents, killing not just for food but also for sheer pleasure. In typical fashion of those who came before them, most of the park personnel are at odds on exactly what to do about this. Claire especially doesn't want to evacuate the park because of all the panic and negative publicity that would cause.

Most of this is experienced through the eyes of Claire's two nephews Gray (Ty Simpkins) and Zach (Nick Robinson), who fly over to visit her but get stuck with her assistant as she's got too much work to do and eventually wander off on their own. The younger Gray helps the movie a lot as the park is introduced- he's extremely excited about it and we can't help but be also, even when his older brother Zach is more jaded and sees the whole thing as "boring" and "for little kids". The two of them get into a bit of trouble while riding a very cool gyrosphere car, a round transparent sphere with seats inside, through a field of dinosaurs when the decision to evacuate the park is finally made and they don't take it seriously. Meanwhile dinosaur-trainer Owen (Chris Pratt, who gets top billing here) seems to be one of the few in charge who tries to think logically in stopping the Indominus Rex's destruction, even while butting heads with InGen's head of security Hoskins (Vincent D'Onofrio) who has dreams of training dinosaurs for military use. 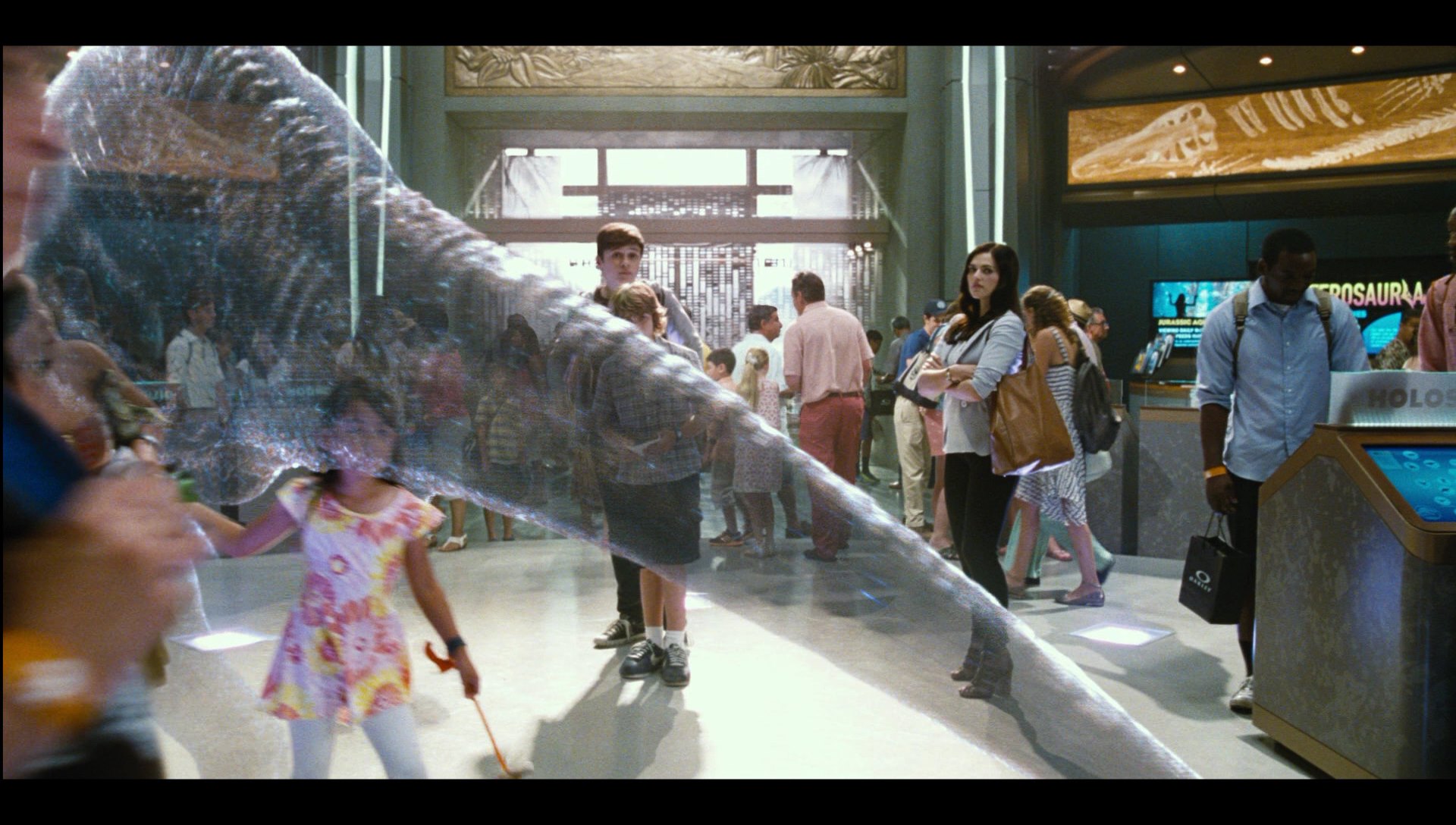 Jurassic World had mixed reactions when it premiered in theaters, and having re-watched the first three movies before viewing this one for the first time I couldn't help but find it a bit lacking in a few areas, most likely from the absence of author Michael Crichton. While it's great to see the tourist attraction finally become a reality here, another movie could have been made explaining how that all came to be- while a few things are explained (such as the dinos' tracking devices) we're mainly forced to accept that things just worked out this time. A big problem I had with the movie was that the only returning character from any of the previous movies was geneticist Henry Wu (B. D. Wong) from the first. Founder John Hammond has passed on (as has actor Richard Attenborough) and gets a statue in the new park, but there's no explanation as to the whereabouts of Doctors Alan Grant nor Ian Malcolm. They must have at least seen the park at some point, and someone surely would have thought to call them once the whole Indominus Rex problem started, but one can only guess that they were someplace far away and just facepalmed when hearing the news second-handedly. (Sharp-eyed viewers will notice a book by Ian Malcolm visible a few times in the movie.) It doesn't help that there aren't any characters to take their place who seem even remotely as intelligent. Owen is considered the "hero" of Jurassic World but onscreen he elicits more macho-ness than smarts, and there isn't even enough backstory on him to give him much credibility. On top of that, park director Claire appears so inept that you have to wonder just how she obtained her position. She's all about the money and maximizing revenue, but seems to know next to nothing about dinosaurs themselves and becomes a stereotypical "damsel in distress" when she's forced to head outside the office into the dinos' living quarters. Jurassic Park III had its share of not-so-bright characters, but at least they weren't in such high-ranking positions. Still, there's no denying that the movie is a fun ride with some very cool effects and concepts, with a killer sound mix and 3D that make it as much of an experience as a movie. 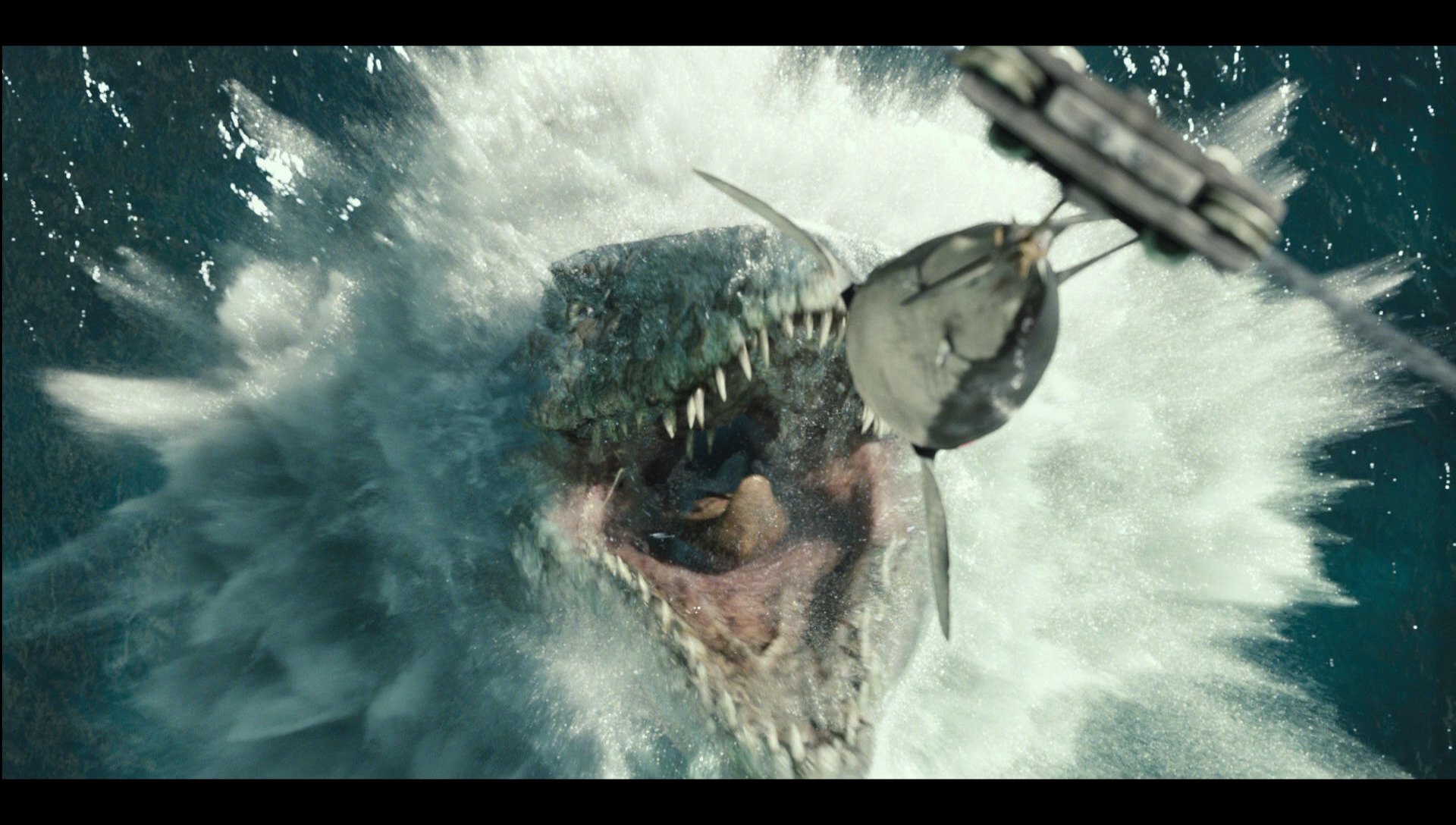 Jurassic World was shot with a variety of formats including both 35mm and 65mm film as well as digital, with 3D post-conversion by StereoD. For the most part the movie looks like it was shot in native 3D, with strong depth in most scenes although there are no pop-out gimmicks. Foreground objects typically stand out, and the 3D also enhances a few shots from above where we are looking down on the action, such as an underwater tank from which a creature leaps out. The movie is presented in a ratio just slightly wider than conventional 1.85 and has a prevailing blue tint to it, though not quite as much as Man of Steel. Aside from a brief spot during the movie's opening I saw no artifacts or gradient banding, which generally appear more prevalently in 3D on my system.

A second Blu-Ray disc presents the movie in 2D, with a standard DVD in good old NTSC (appearing very soft in comparison) if you somehow long for that after too much hi-def 3D viewing. I personally would have rather had a laserdisc than a DVD included, but that would've been harder to fit in the package. 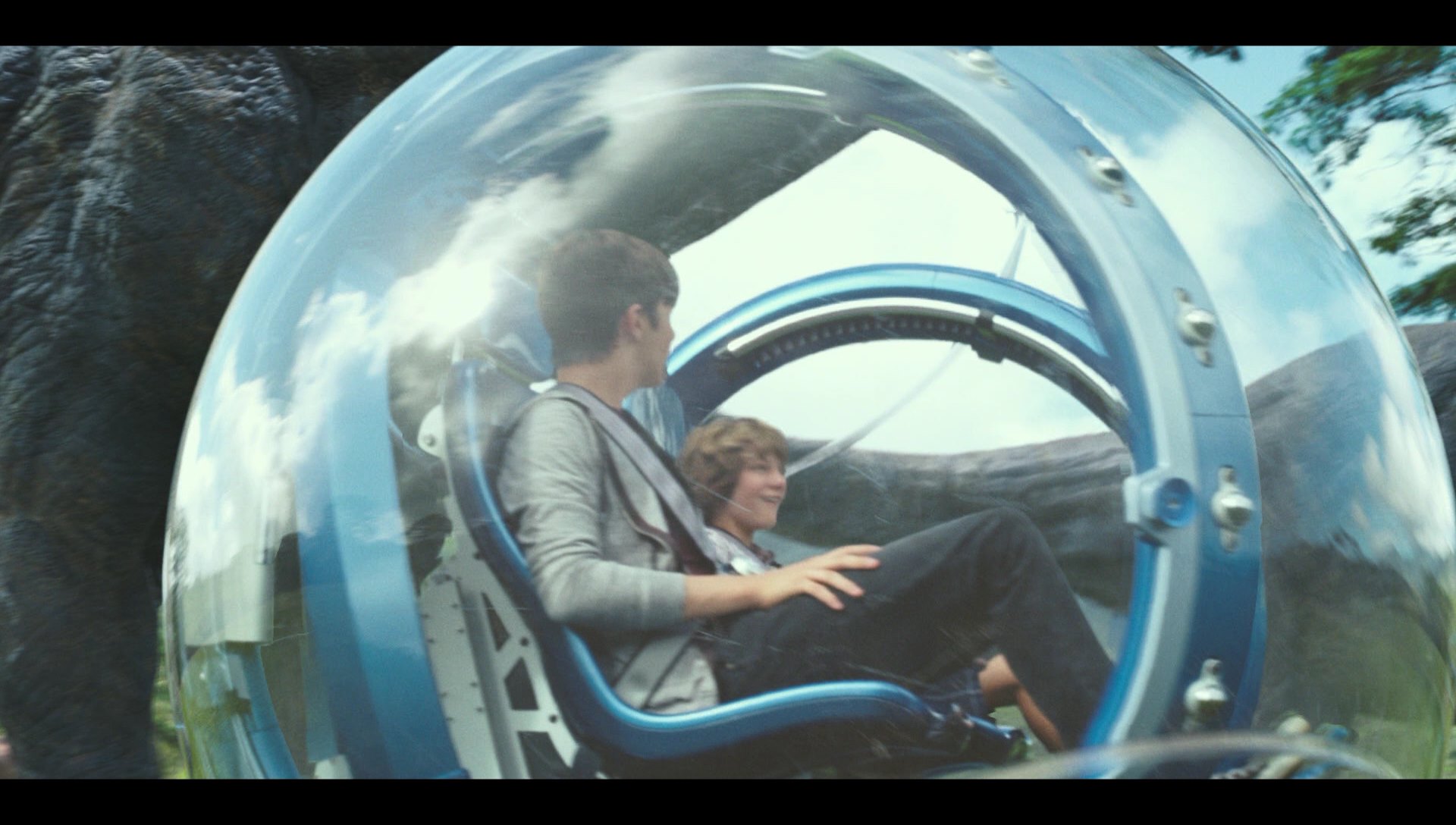 The first Jurassic Park had a groundbreaking soundtrack which is still a benchmark for today's movies. Jurassic World doesn't quite match it, but the 7.1 sound mix (in DTS Master Audio on both Blu-Rays, and 5.1 Dolby Digital on the DVD) is still very involving with some dinosaur roars appearing in the rear channels that could make you jump out of your seat. The sound doesn't get a perfect score because in many scenes the dialogue is a bit unintelligible- sometimes there's just too many other sounds going on while characters are talking and other times they don't seem to speak very clearly, which will have me watching this again later while reading the hearing-impaired subtitles. (The Blu-Rays discs do include Universal's "uHear" feature, where the yellow button will replay the previous 30 seconds with subtitles on and then switch them back off.) Spanish and French dubs in 5.1 and a Descriptive Audio track in 2-channel are also included on all discs with Spanish and French subtitles. 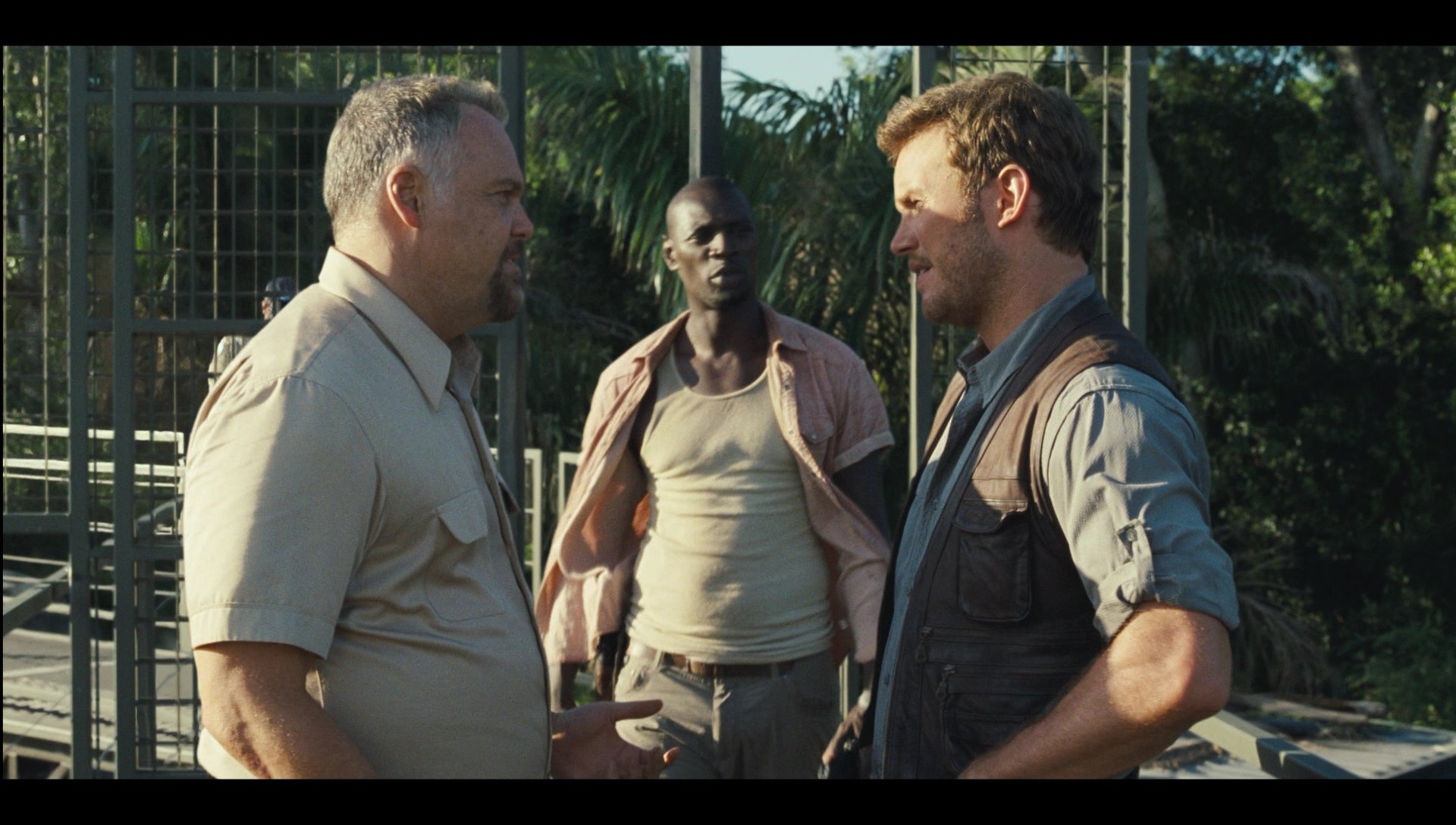 The extras here aren't as extensive as they were on the DVD and Blu-Ray discs of the previous three movies, but they're enough to shed a bit more light on the film. All three discs include six minutes of deleted scenes, including one where Claire and Owen smear dinosaur excrement on themselves in order to hide their scents. I'm glad that it was decided not to include that in the movie. "Chris and Colin Take on the World" is an in-studio conversation with actor Chris Pratt and director Colin Trevorrow, where Pratt tells us that he joked a few years ago about starring in the next Jurassic Park movie having no idea that it would actually happen. Both of these extras on the 3D disc are in 2D but the display is kept in 3D mode.

The 2D Blu-Ray and DVD include "Dinosaurs Roam Once Again" where we get a look at the updated special effects used here. The 2D Blu-Ray also has "Welcome to Jurassic World" which is a good 30-minute piece including comments from executive producer Steven Spielberg and producer Frank Marshall. "Jurassic World All-Access Pass" takes a closer look at the design of the park itself, Chris Pratt gives a brief tour of the park's visitors' center (with a closer look at the John Hammond statue there) and finally there's "Jurassic's Closest Shaves", a 3-minute compilation of attack scenes from all four movies. All 3 discs open with home video promos for The Back to the Future 30th Anniversary Trilogy, Minions, Ted 2, Tremors 5, Self/Less, The Gift, Jarhead 3 and Monsterville: Cabinet of Souls plus ads for the Jurassic Park ride at Universal Studios Hollywood and Orlando and the Lego Jurassic World video game. If you have BD-Live enabled, a few lower-quality but more current streaming trailers will be shown instead. 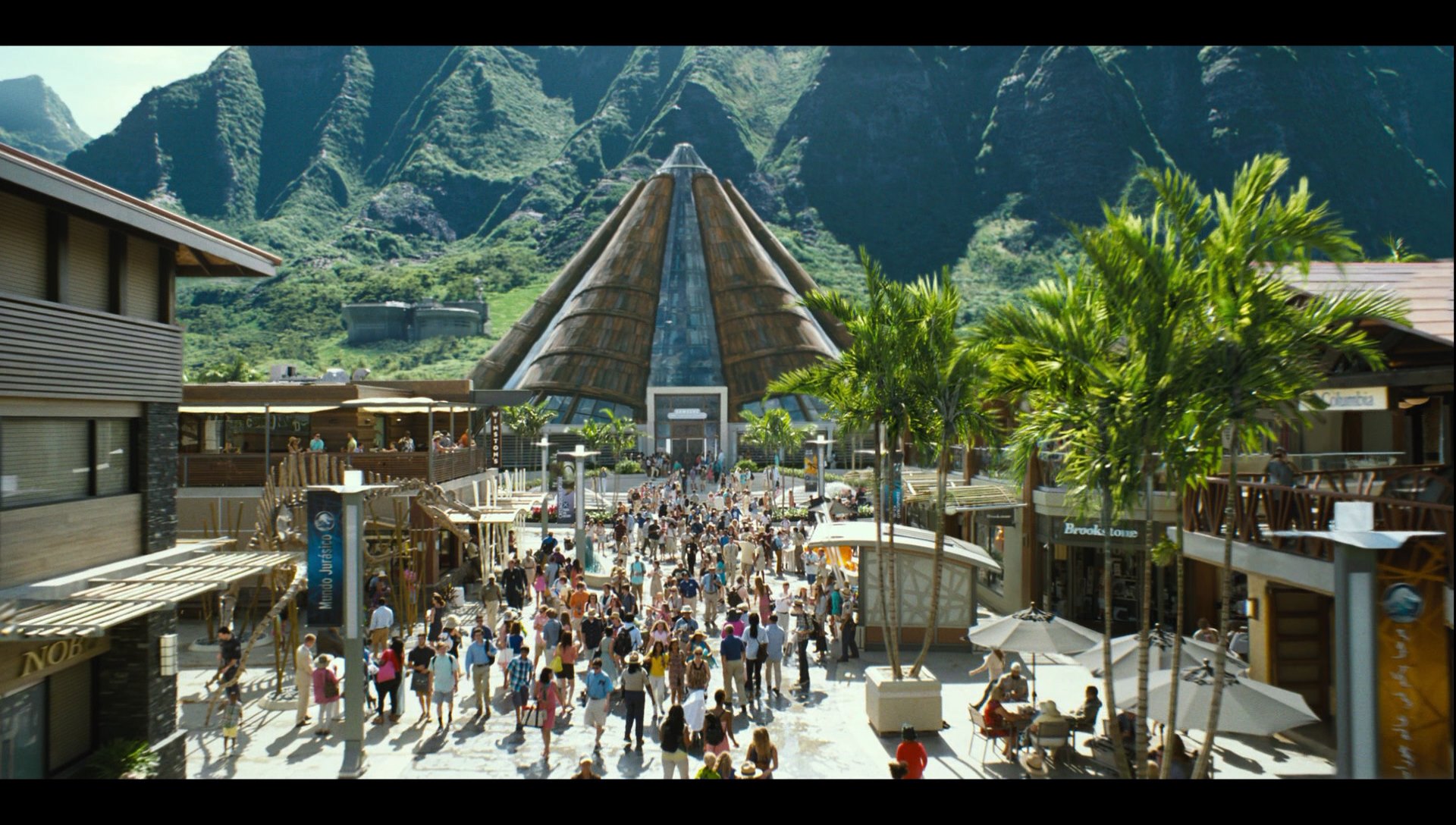 The first Jurassic Park was a hard movie to top, and I found The Lost World to be rather slow and silly in comparison and Jurassic Park III felt like it was made just for the sake of doing another sequel. Jurassic World finally advances the story by having the park become a reality, but it suffers from the absence of the original main characters and those who've taken their place hardly seem qualified to be there. It's still a worthy entry in the series that looks great in 3D, and another entry with the director and much of the cast returning has already been green-lit.