Dope is an energetic but misguided comedy that takes its brilliantly unique premise and runs it to the ground with an unnecessarily convoluted, predictable, and worst of all, bland plot. The film's starting point is intriguing to say the least: Life in one of those LA ghettos we've become so accustomed to, especially thanks to a surge in ghetto crime dramas in the 90s, told from the point of view of three geeks who are incredibly smart, counter culture, into "white boy stuff" like anime and punk, and obsessed with 90s hip-hop like a bunch of white bearded hipsters. Imagine if the protagonist of Menace II Society was Scott Pilgrim. 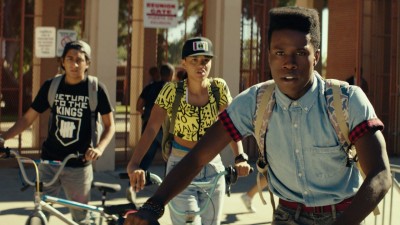 A plot-light, slice of life depiction of surviving in a rough neighborhood, as experienced by Malcolm (Shameik Moore), a high school senior who's a virgin obsessed with going to Harvard, and his two nerd BFFs Jib and Diggy (Tony Revolori and Kiersey Clemons), would have been enough to build a relatable and engrossing tale about how talented and pop-culture obsessed personalities can come from everywhere. It's not like Malcolm and his friends' lives would be devoid of conflict if the unnecessary drug plot wasn't awkwardly inserted into the story.

On a day-to-day basis, the trio is constantly hounded by thugs and drug dealers, beaten up and robbed. The inner conflict is also very palpable and relatable, as Malcolm tries to find a unique approach to apply to Harvard, instead of coming off as yet another "diamond in the rough" statistic for ivy league schools, an inspirational story of a poor black kid rising from the desolation of the ghetto. Malcolm doesn't see himself as the hero of an inspirational rags-to-riches story. He's a geek who deserves the higher education he seeks, and he rightly believes that where he comes from should be immaterial.

All of these story elements should have been enough to build a fun and original comedy that would take its characters' dreams and aspirations seriously. Unfortunately, writer/director Rick Famiyuma insists on splicing in a crime drama about Malcolm getting stuck with a bag full of Molly after going to a party to hook up with Nakia (Zoe Kravitz), a beautiful older girl studying to get her GED. Through a set of unfortunate circumstances, Malcolm is stuck with figuring out a way to sell the drug. It's like an overtly self-serious take on the plot of Half Baked without any of the goofy fun.

Dope plays out like your typical first feature from a young hotshot filmmaker, with all of the pros and cons such a situation brings. There's an undeniable level of freshness to the characters and the performances, and the clever use of voice-over narration brings a unique energy to the film. On the other hand, the pacing and the overall execution are sloppy, and there's an insistence on cramming in four movies' worth of material into a single project in a desperate attempt to impress the audience right out of the gate. There are also some visual gags that come off as atonal and cheap, like the one about a gorgeous naked girl peeing in the bushes in broad daylight while tripping on the drug.

That's why it's surprising to find out that Famiyuma isn't a young first time director. He's middle aged, has been working for almost two decades, and Dope is his fourth feature. On one hand, it's admirable that he was able to reinvent his style to match with modern sensibilities. On the other hand, there are baffling freshman mistakes here that a director with his experience should have been able to avoid. 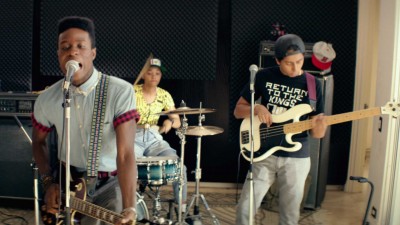 Since Dope is about characters who are obsessed with 90s hip hop culture (So much so that I had to constantly remind myself that this wasn't a period piece), the film's bright and colorful cinematography is full of the exuberant aesthetic we know from that era. The 1080p transfer brings out Dope's vibrant colors perfectly to the small screen, without any noticeable video noise.

In the case of the DTS-HD 5.1 track, of course the most important element is whether or not the soundtrack full of old school and contemporary hip hop tracks comes to life through the surround speakers. The answer is a resounding yes! Not only does the music showcase a lot of depth and power, Dope is also one of those rare indies with a vibrant and energetic surround mix.

Dope is Different: A 3-minute glorified trailer where the cast and crew very briefly talk about their roles in the film.

Dope Music: Another 3-minute EPK, this one about the musicians who helped with Dope's unique soundtrack.

Dope starts out with the right first steps, and then devolves into a typical crime drama with some fresh comedic undertones. Apart from the technical execution issues, Famiyuma also sells himself short with a disingenuous finale that betrays what made Malcolm so relatable as a character in the first place. That being said, it still has a lot of elements that rise above similar comedies, so it might be worth a rental.