Dystopia ahoy! Richard Lester's 1969 comedy The Bed Sitting Room left no stone unturned, or no sacred cow un-tipped. Set in a near-future Great Britain destroyed by the atomic bomb, the film skewers the government, religion, family values, and the monarchy with a distinct lack of mercy. Though I wish the final results were more tightly paced, the movie remains out-there enough to be a welcome addition to Kino Lorber's Studio Classics line of hard-to-find films on home video.

Lester sets up the world of The Bed Sitting Room as a desolate wasteland (filmed in a garbage dump and other evocative locales), where the few remaining survivors carry on their lives with a "can do, cheerio" mix of positivity and obliviousness. Vital institutions have been reduced to a single figure or two - the BBC news is read by a dignified guy in a half-suit (Frank Thorton) crouched in the shell of a broken TV set, medical needs are addressed by a nonchalant doctor (Michael Hordern) and a crazed male nurse (Marty Feldman) who randomly issues death certificates to the remaining citizens. While the police force has been winnowed down to an obstinate inspector (Peter Cook) barking orders from a hot air balloon, his only remaining sergeant (Dudley Moore) powers London's tube system on a pedal bike. Meanwhile, the subway has become a refuge for an elderly couple (Arthur Lowe and Mona Washburn) and their pregnant daughter (Rita Tushingham). The parents vainly attempt to keep the daughter away from her boyfriend (Richard Warwick), a mod dresser who is apparently the last virile man on Earth.

The bomb has caused an odd side effect in these Londoners, making them transform into inanimate objects and animals. The malady has afflicted one Lord Fortnum of Alamein (Ralph Richardson), who eventually becomes a bed sitting room, and the mother in the subway-dwelling family, who morphs into an armoire with floral-patterned interior. Their fellow Brits don't seem too upset about it, however, as the father forces his daughter to marry the doctor and the survivors break out into a rousing rendition of "God Save Mrs. Ethel Shroake" (Ethel has assumed the royal throne).

Although The Bed Sitting Room sports some incredible visuals, one can't help but think of the movie as a television sketch padded out to feature-length. It does have something of a Monty Python's Flying Circus feel, with writers and several cast members (including Spike Milligan) cribbed from the cult British comedy series The Goon Show. Having just seen Twilight Time's Blu-ray edition of the 1982 animated feature When the Wind Blows (which deals with an elderly British couple coping with the onset and after-effects of nuclear war), this movie can't help but feel pallid and repetitive by comparison. Lester is a capable director, and the cast is appealing, but the end results wind up half-baked. 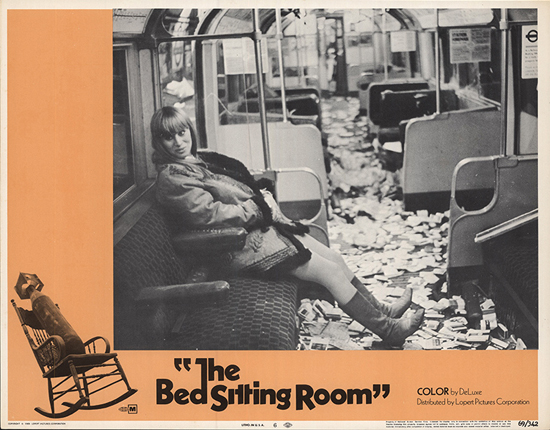 Please Note: The stills used here are taken from promotional materials and do not reflect the contents of the Blu-ray being reviewed.

The Kino Lorber Studio Classics Blu-ray of The Bed Sitting Room sports a nicely detailed, adequate looking picture. The 1.66:1 image derives from an aged but decently preserved print with somewhat faded color and a moderate amount of dust and scratches. Image is relatively stable with some reel-change markers appearing from time to time. The visuals won't blow you away, but they satisfy considering the age of the source material.

Like the visuals, the mono soundtrack is about what one would expect of a '60s-period feature film on Blu-ray. The dynamics are a little limited, with distortion only appearing during louder-pitched scenes. The dialogue has a decent amount of clarity, however. No subtitles or alternate audio are provided.

Kino Lorber has included a couple of episodes of John Landis' web series Trailers from Hell as extras, along with the trailers for The Bed Sitting Room and a few other, similar '60s comedies available in the Studio Classics series. The T.F.H. on The Bed Sitting Room features Landis explaining the film's genius over the original trailer, while another episode has director Allan Arkush enthusing over Lester's 1965 film The Knack… and How to Get It.

Excellent art direction and a barely-contained sense of anarchy are among the highlights of The Bed Sitting Room, Richard Lester's gleeful speculation on how Mother Britain might cope with nuclear annihilation. The movie is too loosely done and episodic to support a feature-length comedy, although fans of Brazil and classic Monty Python might want to seek it out. Rent It.