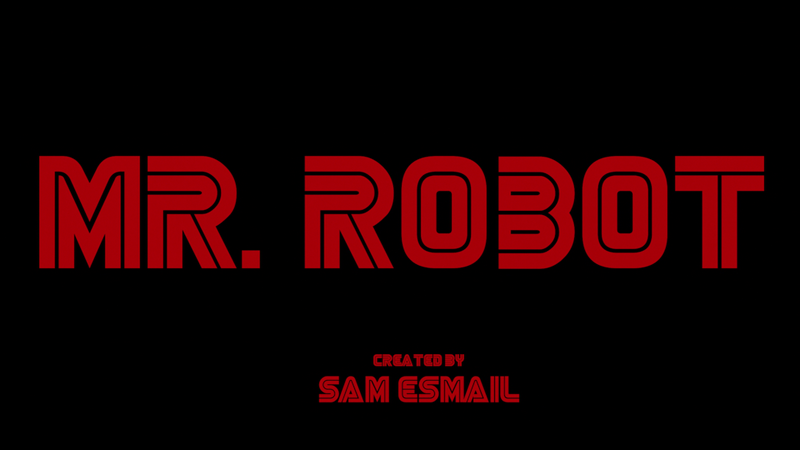 
The Show
When looking for high-quality, high-polish television entertainment, most would think to turn to an HBO or a Showtime, or, increasingly, Netflix and Amazon. The USA Network, the one-time home to fondly-remembered oddities like Up All Night, Night Flight and Dance Party USA, is not likely to be on that list. Yes, they have delivered some fine programming, like the fun sitcom Playing House and seemingly popular series like Suits and Burn Notice, but it hasn't been the home of anything that would be considered high-end and award-worthy. Until Sam Esmail's Mr. Robot, which has earned a host of nominations, including a pair of wins at the Golden Globes.

Coming seemingly out of nowhere (with the twisty, visually-impressive festival bait Comet as the only notable credit on his resume) AFI-grad and Black List alumnus Esmail, who serves as creator, writer and occasional director here, stormed small screens with his 10-episode tale of Elliot Alderson (Rami Malek), a cybersecurity expert by day, hacker by night, and drug-addled, anti-social mess all the time. Elliot's living in a haze thanks to an addiction to morphine, which he takes with a pill to fight addiction, in an attempt to feel like he's not a junkie. The functional world he's built comes crashing down though when he runs into the anarchist hacker collective fsociety (not unlike the real-word Anonymous, down to a similar, unifying mask.) Drawn in by their mission and their leader, Mr. Robot (Christian Slater), he joins their assault on the largest business entity in the world, the ridiculously-named Evil Corp.

While this plot, which is not hugely different from the delightful film Hackers (a poor representation of hacking that's slagged in a wonderful Mr. Robot meta joke), would be enough to maintain a film, for 10 hour-long episodes (minus commercials) there needed to be more, and there certainly is, exploring morality and ethics through a number of characters, including the struggles of Elliot's co-worker Angela (Portia Doubleday), whose life is crumbling thanks to the influences of the web and Evil Corp, Elliot's interest in his neighbor and drug hook-up Shayla (Frankie Shaw), the dynamics inside fsociety, which includes free-spirit Darlene (Carly Chaikin); and the Swedish power couple the Wellicks, Evil Corp executive Tyrell (Martin Wallstrom) and his wife Joanna (Stephanie Corneliussen.) Though you could somewhat easily remove the Wellicks and their dark Shakespearean storyline from the show without affecting the overall plot (for the most part), their scenes, often in their subtitled native language, are some of the most memorable in the show, as their characters represent everything fsociety seeks to defeat and they are the kind of people you can't help but be fascinated with. The show risks becoming preachy at times, usually when Elliot or Mr. Robot has a monologue about society, but it smartly doles those moments out judiciously in order to make a point. 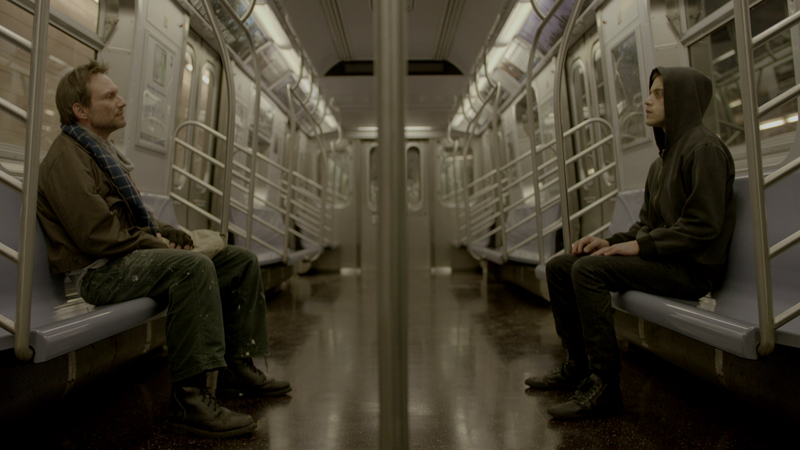 Of course, the show is about Elliot, and he's an incredibly compelling person to watch, whether he's trying to help others (leading to new problems), trying to help himself out of the trouble he lands himself in or just trying to figure out his own reality, as paranoia, drugs and apparent mental disorders have left him with a tenuous grip on what's real and what's imagined, a situation that becomes worse as he goes deeper down the rabbit hole, and finds he has more in common with the mysterious (and dangerously unhinged) Mr. Robot than he ever would have thought. There's a chance you'll get ahead of the mystery, but it's satisfying either way. The key is the wide-eyed Malek, who's a master of the confused, disconnected, yet intense facial expression, which sells the idea that he's not hooked in with the society around him, while layering in more emotion as the character requires it. The acting across the board is outstanding, from main characters to guest, with Doubleday and Chaikin delivering stand-out performances, while Slater brings his usual mix of intensity and somewhat-creepy charm.

As Esmail has said, Mr. Robot has some very obvious inspirations (one of which would serve as a major spoiler if mentioned, which is why this review leans toward the vague) but it would be a mistake to consider the show a copycat or a rip-off. Ingesting those inspirations and combining them with events from recent history, has resulted in something wholly topical, while also quite fresh and original, if only because of the series' visual style. The Girl with the Dragon Tattoo director Niels Arden Oplev set the tone with the pilot, establishing a truly cinematic look, while Esmail's style of utilizing unique framing, as seen in Comet, emphasizes the series' sense of claustrophobia and paranoia. The editing and visual effects are also highly important to the feel, helping cement the show firmly as taking place in Internet-powered world, while helping the viewer share Elliot's fractured mindset (a facet aided by the show's meta voiceover device, which directly addresses the audience.)

The only real issue with Mr. Robot is the importance of the twists and reveals that are exposed as the season progresses. There are several story points that would ruin the feel of the show if known before they come out in their due time, and as a result, when watching it again, knowing the secrets, the series just doesn't have the same spark. Yes, the artistry is still exceptional and the acting is outstanding, but being ahead of the game robs the show of its mystery and the joy of watching the characters develop. However, if every show could offer the same high-quality first impression as Mr. Robot, they'd certainly sacrifice repeat viewings. 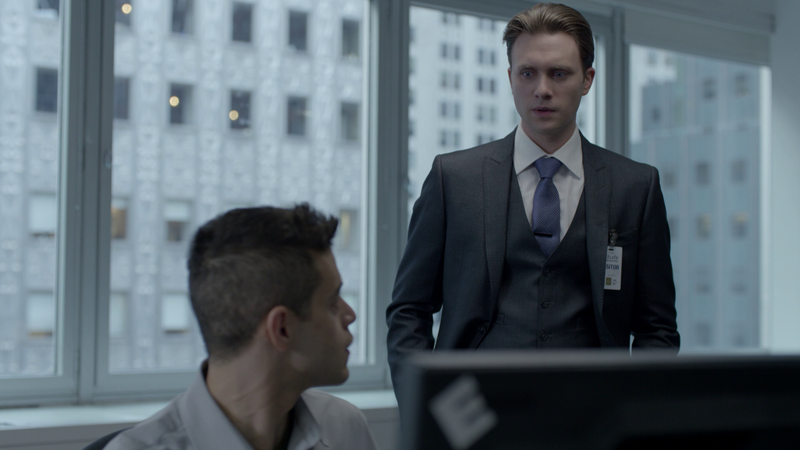 The Discs
Universal put together quite the nice little package for the first season of Mr. Robot. For once, a slipcover was used to present a different piece of art than the interior cover, as the glossy, embossed outer sleeve, with the striking shot of Elliot and the show's tagline, slides over the more minimalist, illustrated cover of the standard-width dual-hubbed Blu-ray case with a two-sided cover featuring disc contents on the reverse. The 10 episodes are split evenly between two Blu-ray discs, which have cover art designed to look like Elliot's DVDs in the show. The discs have static menus with an icon-based version of the Universal curve menu, offering options to play all the episodes, select shows, adjust the languages and check out the extras. There are no audio options, while subtitles are available in English SDH.

The Quality
This stylish series looks fantastic thanks to these 1080p, AVC-encoded transfers, which are gorgeous, with appropriate color throughout, no matter the palette (and there's a wide variety of those, from dingy apartments to antiseptic offices and everything in-between.) Black levels are similarly impressive, as are the fleshtones, while the level of fine detail is exceedingly high, allowing the series' strong production design to really come across clearly. Digital distractions are not a concern, despite a series that at times moves at a breakneck pace visually with tons happening on-screen.

The 5.1 DTS-HD Master Audio tracks here are a big part of the show's feel, especially the strong sense of dread and tension that permeates some of the best scenes. While the dialogue is clear and easily understood, the music is the show's main source of power, as the intense instrumentals are enhanced by the side and rear speakers, as well as the strong bass that helps deliver the audio punch. Atmospheric effects are strong and enveloping when appropriate to the scene (some moments eliminate sound to great effect) while some excellent directionality and placement is often noticeable in the sound effects. Overall, it's a terrific way to experience the world of Mr. Robot.

The Extras
The first disc holds only a pair of deleted scenes, one from episode 1.1 (:21) and 1.3 (1:52) each. While the brief one doesn't offer much content, the other has no context. Even after going back to watch the episode again, it's hard to tell exactly what is going on, as Darlene searches around the library, or when this scene was supposed to occur. Both were not missed in any obvious way.

Disc Two has another set of deleted scenes, six from 1.6 (10:42) and one from 1.8 (:30). There are some interesting moments in here, including a scene between Tyrell and Johanna at the obstetrician and an argument between Angela and her father, but most of it, especially the scene with Darlene and her hacker pal, offered material better handled through dialogue in the final cut. One aside from Angela is just ridiculous and out of character for the series and better left cut.

The gag reel (5:16) is an amusing distraction, mainly for how the silliness (often on the part of Slater) contradicts with the serious tone of the show and characters, particularly when it comes to the Swedes. It's just not really hilarious at all.

The well-made and efficient "M4k1ng_0f_Mr_R0b0t.mov" (12:13) mixes interviews with Esmail, Malek, Slater, Chaikin, Doubleday, Rappaport, production designer Stephen Beatrice and executive producer's assistant Kor Adana with on-set footage and clips to deliver an overview of the show and the people responsible, touching on the show's inspiratons and history, as well as key elements of the production, including tech effects and production design. There are a great deal of spoilers here however, so watch the show first.

Unfortunately, there was a good deal of content on the USA Network website, including short episode video commentaries by Esmail along with trivia tracks, which have not been archived here.

Also in the box is a code for an HD Ultraviolet stream or download of the season.

(Just a note… each episode has the "Previously On…" intro built in, rather than as a separate extra [as it should have been], which is really unnecessary and sort of annoying when binge-watching on Blu-ray [though admittedly, one that precedes a later episode helps remind viewers of a character they hadn't seen since much earlier.]) 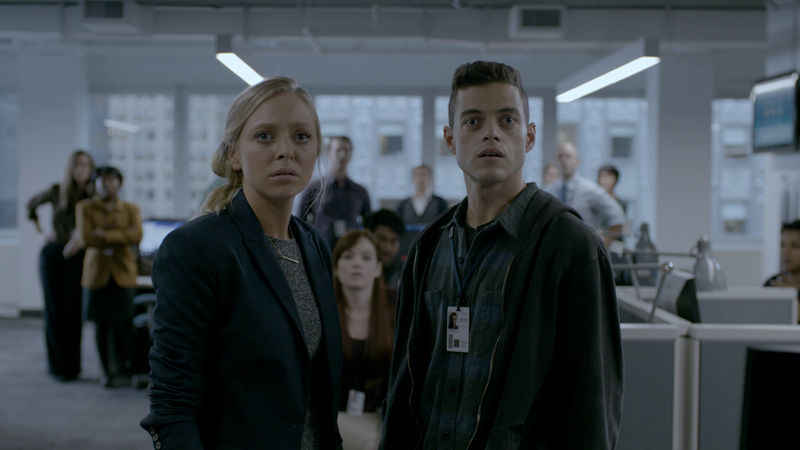 The Bottom Line
Mr. Robot is incredibly well-made, with tremendous performances, rising above its obvious influences to become a memorable show in its own right, a mix of timely social commentary, Shakespearean drama and trippy psychological thriller. The Blu-ray release looks and sounds fantastic, though the extras are disappointing, especially when there's previously-released content not included. Thanks to the importance of its twists and reveals, Mr. Robot doesn't have the same impact on repeat viewings, but it's a must-see. (Where it goes in Season Two, though, is anyone's guess.)