There are two sides to every coin, but sometimes both sides look so similar that it's hard to tell your heads from your tails. A similar situation is taking place with the US' war on the insanely dangerous and destructive Mexican drug cartels. In order to fight a beast that kills pretty much indiscriminately, and has an insatiable appetite for violence, one must become a beast in order to at least have a fighting chance. It's when both beasts become indistinguishable from one another; the whole endeavor turns into a tragic farce. 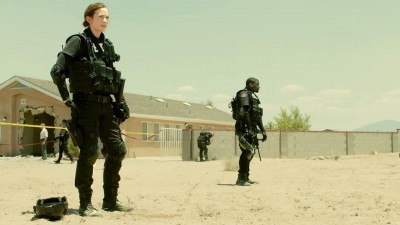 Exploring the thin line between good and evil is certainly not a new theme for narrative art, but Sicario, Denis Villeneuve's brutal, intense, and brutally honest thriller about US border agents' unorthodox methods in fighting the cartels, manages to blur that line so much, that it becomes nearly impossible to figure out the specific sides in the fight. The story focuses on FBI agent Kate Macer (Emily Blunt, in a mesmerizing performance that strips away all of her movie star persona), who vows to catch the cartel gang responsible for her colleagues' deaths after a drug raid goes horribly wrong.

With the clear motivation of revenge, Kate joins a secret government task force dedicated to eradicating the cartels, run by Matt Graver (Josh Brolin), an agent who's not afraid to break any law that gets in the way of his work. As Kate's taken to Mexico in order to fight the battle on the front lines, she gradually begins to realize that the clear distinction she wanted to witness between the "good guys" and the "bad guys" does not exist, and she might have an issue with getting her hands as dirty as Matt wants them to be. Once a mysterious Mexican agent named Alejandro (Benicio Del Toro) enters the picture and begins to really shake things up, Kate gradually grasps the futility of her dedication to her country's ideals about law and order.

Villeneuve is an interesting and brave director. Even though Sicario is the first feature he made that I think of as being legitimately great, his dedication to tackling tough material has always yielded thought-provoking results. Even with its many script problems, 2013's Prisoners managed to be memorable thanks to Villeneuve's intense direction. He surprisingly decided to follow up a clear genre exercise like Prisoners with Enemy, a surreal study about the different people we turn into during relationships. That was a somewhat impenetrable, yet always fascinating experience.

With Sicario, Villeneuve finds a perfect balance between the silent moments, where an inescapable sense of dread creeps in, and expertly executed, pulse-pounding action sequences that are driven by the organic developments of the story. A shootout sequence on a highway that leads to the border is my favorite action scene of the year, thanks to Villeneuve's meticulous attention to detail and his deft prioritization of suspense over empty thrills. He knows that it's the buildup, and not necessarily the payoff, that makes a great action sequence. 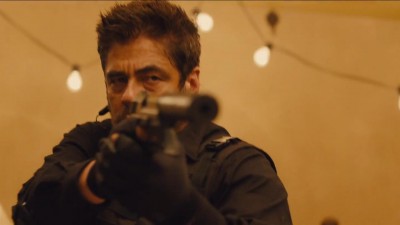 There are three reasons to shell out your hard-earned money on a Blu-ray copy of Sicario: Roger Deakins, Roger Deakins, and Roger Deakins. The legendary DP is a master, especially when it comes to capturing earth tones, so it's no wonder that Sicario sports perhaps the best cinematography of 2015. The 1080p transfer does a great job of bringing Deakins' work into the home video realm. The contrast during dark scenes are captured without any video noise, and the rest of the transfer is clean, yet retains a gritty film look.

We get a Dolby Atmos 7.1 track, which is a godsend for audiences who want to showcase the intense action set pieces of the film. Sicario has its share of quiet moments, which the audio transfer captures with impressive detail. But when the crap hits the fan, get ready for your system to have quite a workout. One thing I love about this release is that a 2.0 track, optimized for late-night viewing, is also offered. For those of us with a toddler who's a light sleeper, this option is highly appreciated.

Stepping into Darkness: In this 16-minute featurette, the crew talks about how they captured the look of the film.

Portraying the Characters of Sicario: Blunt, Brolin, and Del Toro talk candidly about their characters during this 14-minute extra.

A Pulse from the Desert: Johann Johannsson's haunting score is one of the best of the year. This short doc interviews the composer about the film's music.

Battle Zone: This short but informative featurette delves into the real struggle behind Sicario. If you only have time for one extra, make it this one.

We also get a DVD and a digital copy of the film.

Sicario would make a perfect, albeit depressing, double feature with Cartel Land, this year's somewhat uneven but sobering documentary about both American and Mexican citizens' battle against the cartels. Thanks to great performances and Villeneuve's assured direction, Sicario turns out to be one of the best thrillers of the year. And this Blu-ray, with near-perfect A/V transfers, comes highly recommended.