When you think about it, Amy Schumer and Judd Apatow creates the perfect team to put together a raunchy mainstream romantic comedy. Schumer's been on a meteoric rise in the comedy world during the last couple of years, thanks to her subversive, semi-satirical take on modern female sexuality. As hilarious as the third season of Schumer's Comedy Central sketch show was (Seek out her brilliant remake of 12 Angry Men where a bunch of sexist idiots fight over whether or not Schumer is hot enough for TV), it's hard to imagine the specific theme-based humor and her subversive yet potentially episodic antics working when stretched out to a feature-length comedy. 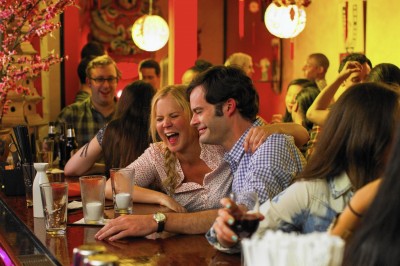 That's why Apatow's envelope-pushing but structurally conservative rom-com approach is perfect for Schumer to take the first step into raunchy female-centric comedy previously dominated by Paul Feig and Melissa McCarthy. In Trainwreck, Schumer (Who also wrote the screenplay) plays Amy, who's basically a female spin on the party animal, snarky, womanizing, commitment-phobic bro archetype many rom-coms have exploited for decades. The reason for setting up such a free-spirited yet narcissistic character during the first act is simple: It makes writing a relatable and clear character arc that much easier. Does anyone think such a character will not find true love and change his ways by the end of the third act?

Trainwreck basically presents the exact same formula, aided by Apatow's loosely paced but almost always funny tangential narrative style. The only difference is that the protagonist has switched genders. Sadly enough, since there aren't many examples of such mainstream rom-coms with such an archetype portrayed by a female character, that spin alone makes Trainwreck feel fresh and original.

While Amy's perfectly content with a life that consists of sleeping with a lot of men after getting drunk at the club, her world is turned upside down when she's assigned to write a story about Aaron (Bill Hader), doctor to superstar athletes, which gives Apatow an excuse to follow his favorite hobby of extracting comedy gold from non-comedians like LeBron James. Taken back by her feelings for Aaron, Amy's scared of trying a more traditional relationship with the famous doctor, but will her past and her indoctrination by her fervently anti-monogamous father (Colin Quinn) get in the way? Yes, you know exactly where this story's going, you can even guess how the second act break and the cutesy finale will play out.

In fact, as far as the plot is concerned, there's no reason for Trainwreck to be over 90 minutes. Of course the mix of Schumer's sketch show background and Apatow's expansive and loose-form approach to comedy makes sure that a lot of improv lines and tangential sub-plots get in the way. Yes, almost all of it is filler, but it's mostly brilliant and hilarious filler brought on by a cast full of incredibly talented people. Tilda Swinton's heartless magazine editor and the retooling of LeBron James' public persona as an insanely rich cheapskate makes sure that the filler is justified. But the MVP of non-comedic actors bringing their A-games goes to John Cena, who knocks his part as Amy's beefcake wholesome boyfriend out of the park. It's a shame that his character disappears after the first act.

Most of the time, Trainwreck supports a typically bright rom-com look. There's some edgy and dark material here and there during the scenes that show Amy's partying lifestyle. Apatow's usual style is to turn his camera on funny and charismatic people and let it roll. That being said, the 1080p transfer does a great job capturing that look cleanly and without any video noise.

Trainwreck follows a fairly common rom-com mix that favors front-heavy dialogue. The DTS-HD 5.1 track comes to life when club music and the various contemporary songs are featured. Otherwise, don't expect much in the way of surround power from Trainwreck. 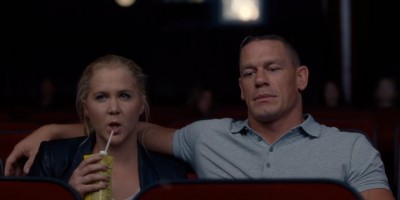 Unrated Version: This version is about four minutes longer and usually includes extended scenes and extra lines. Be warned that you have to enter the extras to change the version. If you hit play after inserting the disc, you'll automatically watch the theatrical cut.

Deleted Scenes: An insanely long 45-minutes of deleted scenes work like a series of sketches that the cast and crew wrote and performed on the day of the shoot. Some really funny stuff here.

Alternate Scenes: If that wasn't enough, get ready for 50 minutes of alternate takes and extensions on scenes already in the movie. I'd pick the deleted scenes if you don't have time for both.

Secrets of the Wu: This is a 2-minute shot of Method Man explaining the Wu-Tang Clan to the 100-year-old Norman Lloyd. This is absolutely adorable. If you only have time for one extra, make it this one.

The Dogwalker: This 5-minute extra shows the two clips from the intentionally lame indie within the film. There's nothing really new here since the clips already feature in the movie itself.

Line-O-Rama: A succession of quick cuts with actors trying different lines and jokes.

Directing Athletes: A 10-minute featurette where Judd Apatow and the various athletes featured in the film discuss how they worked together to extract comedy performances.

Behind The Scenes: 90 minutes of behind the scenes material that digs deep into the production, from pre-production to release. Highly recommended for fans of the film.

Trainwreck Comedy Tour: Behind the scenes of the comedy tour put together to promote the film, originally posted on Funny or Die. The chapters are separated by city.

Audio Commentary with Judd Apatow, Amy Schumer, and Associate Producer Kim Caramale: This is a fun commentary that mixes dry information about the production with funny and loose anecdotes.

We also get a Red Band Trailer, DVD copy of the film, as well as a voucher for iTunes and Ultraviolet Digital Copy.

Even though it doesn't break new ground as far as rom-coms are concerned, aside from the gender switch of a typically male character type, Trainwreck is a return to form for Apatow, who rewrote the confines of the genre with the brilliant 40 Year Old Virgin ten years ago, as well as a decent feature-length expansion of Schumer's TV persona. The great A/V presentation and the insane amount of extras make this Blu-ray a must-buy for fans.