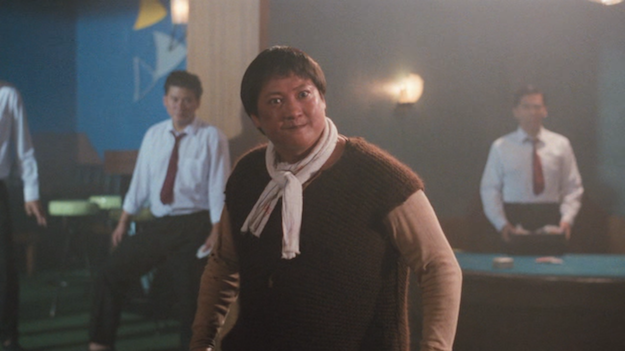 This past summer, there was a minor buzz on the internet because Warner had added some titles from Hong Kong powerhouse studio Golden Harvest to their Warner Archive Instant streaming service -- and in HD! Were Blu-ray releases for these U.S. premieres also in the offing? Well, it looks like the Warner Archive Collection is just sticking to manufactured-on-demand (MOD) DVD-Rs with their first round of four Golden Harvest releases (which also includes Blade of Fury and Downtown Torpedoes) , but if they prove popular, you never know.

One of these first offerings is a vehicle for Sammo Hung, who is mostly known to U.S. viewers as the overweight pal and sometime collaborator of Jackie Chan -- the kung fu Fatty Arbuckle to Chan's kung fu Buster Keaton. The 1989 Golden Harvest film Pedicab Driver is a chance to see Hung on his own, as both star and director, in a film as notable for its relentlessly inventive and cartoonishly fast fight scenes as it is for its tonal whiplash.

The film follows the various misadventures of a quartet of pedicab drivers in 1930s Macau, although the whole thing essentially boils down to two interweaving plots that seem like they belong in two entirely different movies. The first is goofy and comic: it features Hung as Lo Tung, a jolly fellow who competes against his aunt's ugly old baker (Yueh Sun) for the affections of Ha Ping (Nina Li), a busty, sweet kitchen girl (she is introduced with a close-up of her chest wobbling all around, as she tosses dough). The second storyline is much darker and tragic: it concerns a doomed romance between Lo Tung's friend Pretty Boy* (Siu Chung Mok) and Hsiao-Tsui (Fennie Yuen), a delicate young woman he falls for after she falls under the wheels of his pedicab. Before long, Pretty Boy plans to marry her. Well, that's what he plans until he finds out from one of the other drivers, Blue Beard (Lowell Lo), that Hsiao-Tsui is owned by a local mob boss, Mr. M (John Shum). The two stories dovetail when Lo Tung and one of the other drivers, Shorty (Hoi Mang), decide to take revenge on Mr. M for ruining Pretty Boy and Hsiao-Tsui's lives.

Most viewers no doubt care less about this plot and instead care more about the fight scenes. So... how are the fights? Well, from the first to the last, the martial arts sequences in Pedicab Driver are meticulously staged and hyperactively presented. Hung frequently undercranks the camera to give the proceedings a surreal fluidity, even during the fights that are meant to play as shockingly brutal instead of funny. The film opens with a spectacular brawl between pedicab drivers and coolies that is pure slapstick, with gags including a de rigueur crotch scalding and a bizarre Star Wars homage with fluorescent bulbs standing in for light sabers. More effective are Hung's own one-on-one fights throughout the film, including a protracted tussle with the owner of an underground casino that is jaw-dropping and exciting and has absolutely no relation to the rest of the story. The climax is also a barrage of creative gymnastics that boggles the mind. That fat man can really move.

Mood-wise, the film is consistently inconsistent to a schizophrenic degree. Rather than counterpointing its heavy drama with comic relief in a nuanced way, it just slams the two styles together at every turn. Usually in a light action movie, the dramatic scenes play like generic filler, but oddly the more intensely serious moments work better here than the attempts at goofy character comedy or bland cuteness. Maybe Hung wanted to make a more grounded, serious story and was forced to keep in all the broad moments to make it more commercial. Whatever the reason for these weird tonal collisions, Pedicab Driver basically does what it sets out to do, providing solid fight scenes and a little emotional something extra.

*I'm presuming the character's nicknames were "Americanized" in this particular translation, because none of them match up with the credits on IMDB. For example, Pretty Boy is listed there as "Malted Candy." 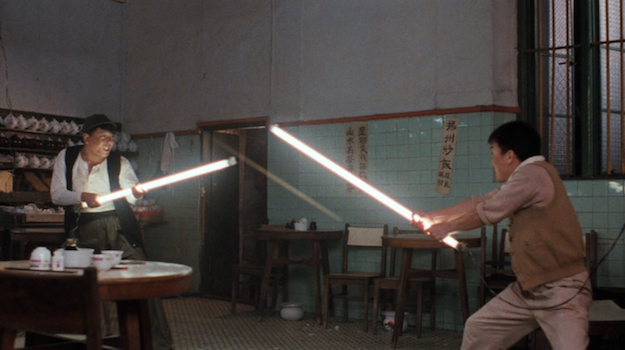 The DVD
Pedicab Driver is presented on MOD DVD-R, courtesy of the Warner Archive Collection.

The Video:
Presumably this widescreen 1.78:1 transfer has been sourced from the same HD master as the streaming version, because the quality is very high. You'll spot some dirt and scratches during the optical effects and a bit of digital compression noise here and there, but overall this presentation boasts rich colors and a surprising level of detail.

The Audio:
The Dolby 2.0 mono audio is fairly detailed in some passages but is mostly pretty boxy and limited. The dialogue and copious fight noises are loud, but also kind of muffled. The package unhelpfully states that the film is in "Chinese," but a brief bout of internet snooping leads me to suspect that the included soundtrack is in Cantonese.

Optional subtitles are included but instead of typical English subs, there is a micromanaging English SDH track. As with many American releases of HK flicks, these subtitles were probably created by non-native speakers, which leads to funny phrases like the following:

"Fuck you, shit"
"You're so brute, woman"
"He just shat at me"
"This money dropped her money"

These semi-nonsense phrases are kind of funny, and don't detract from the viewing. However, whoever decided what sounds needed captioning went way overboard and included explanations for things that are pretty self-evident, like "[thud]" when someone is hit in the head. Honestly, half of the film is subtitled with some variation of "[grunting]" and "[instrumental music]." It mucks up the flow of the action scenes royally. Fortunately, the subs are optional, and pretty much nothing said during the fights is important to the plot, so I just started turning them off for every fight and allowed the language of cinema to tell me what was going on.

Final Thoughts:
Half lighthearted comedy, half brutal melodrama, half martial arts extravaganza, Pedicab Driver is a peculiar flick that is too busy being entertaining to worry about making logical sense. This DVD-R presentation looks pretty great, and would no doubt look even better on Blu-ray (maybe with upgraded subtitles? *hint hint*). In the meanwhile, it's nice to have a legit R1 release of this title. Recommended. 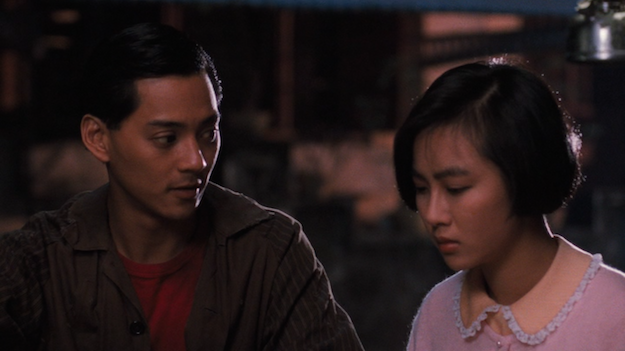