Kino // Unrated // February 16, 2016
List Price: $29.95 [Buy now and save at Amazon]
Review by Stuart Galbraith IV | posted February 3, 2016 | E-mail the Author
A cheap, crummy, and overlong World War II movie set and filmed in the Philippines, Ambush Bay (1966) abounds in every genre cliché imaginable, adding nothing. Independent Hollywood movie companies were just discovering that shooting in the Philippines offered exotic, picturesque locales at a very low cost. Soon after this was made, actors like John Ashley, producers like Roger Corman, and directors such as Jack Hill flourished there. Ambush Bay doesn't really look any more expensive than their cheap-but-effective horror movies and women-in-prison films, yet sold as something far grander than it is. The poster suggests a big scale war epic, but the movie is so cheap it goes out of its way, comically so, to avoid showing things blowing up.

Kino's Blu-ray of MGM's transfer is pretty ordinary, but okay. 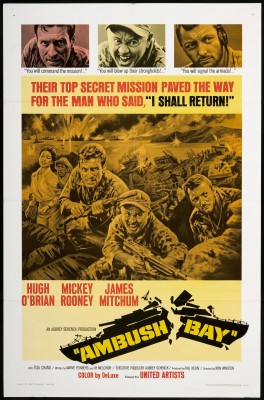 Robert Mitchum's eldest son, James, portrays the film's protagonist and also narrates. Ahead of General MacArthur's invasion of the Philippines in 1944, PFC James Grenier (Mitchum) is a last-minute replacement radio operator on a Marine Corps amphibious reconnaissance mission. Six months out of basic training and with no combat experience, the war-weary team takes an instant dislike to the green Marine.

Their captain (real-life Lt. Col. Clement J. Stadler, a recipient of the Navy Cross and adviser to the film) is killed soon after the landing, forcing square-jawed First Sergeant Corey (Hugh O'Brian, who at 17 became the Corps' youngest-ever drill instructor) to take command.

The film boringly alternates between small skirmishes in which another scout or two is picked off by the Japanese, and uninteresting small talk among the dwindling number of men. Only Gunnery Sergeant Wartell (Mickey Rooney) makes any attempt to be polite toward Grenier. He reveals to the young lad that their mission is to contact an undercover intelligence agent with no radio but big news about the Japanese's plans.

Directed by TV helmer Ron Winston (best remembered, probably, for the famous Twilight Zone episode "The Monsters Are Due on Maple Street"), Ambush Bay was made with the cooperation of both the U.S. Armed Forces and the Filipino military, the latter supplying most of the hardware.

There must have been some agreement that none of the Philippine military equipment (tanks, military base, etc.) would be damaged in any way. In the movie, for instance, there's a scene where two Marines take out a Japanese tank using plastic explosives. But instead of showing the tank (or a mock-up of one) blowing up, the film crudely cuts away during the big explosion, cutting back to the undamaged vehicle with a few wisps of smoke floating about it. In another cut, intended to show an explosion from inside the tank, a very visible wire pulls open the hatch.

In another scene, a seriously wounded Marine left behind but armed with a handful of grenades is quickly surrounded by Japanese troops. Probably the original script had the character bravely blowing himself and the enemy up in a gesture of self-sacrifice, but the script seems to have been awkwardly reworked so that he ends up tossing the grenades off-camera so the audience never gets to see them explode.

The big climax is set at a Japanese military base, where Grenier and Corey try to remotely detonate an offshore minefield. A Filipino base stands in, with crude Japanese flags fashioned out of paper covering Filipino signage. Here, the filmmakers employ no more than a couple of smoke pots and poofs of smoke of the sort that magicians use.

As usual for war movies shot in the Philippines, none of the Japanese characters is played by a Japanese, but rather local Filipinos (most clearly unprofessional actors) later dubbed by fluent Japanese speakers, presumably back in Hollywood.

Hugh O'Brian's character is so flinty, steely-eyed and cold-blooded that he's almost hilarious. It's a wonder that the team behind Airplane! and The Naked Gun movies never tapped him to play the same kind of deadpan character essayed so wonderfully by actors like Robert Stack and Leslie Nielsen. James Mitchum, who in both looks and mannerisms resembles his concurrently famous father so much that it's almost spooky, doesn't quite have his father's naturalness and charisma down, but he's entirely acceptable in the de facto lead (though billed third).

As for Mickey Rooney, one of the top stars of the late 1930s and early ‘40s, he must have had a miserably bad agent. After a long career slump, Rooney had showy roles in a trio of very high-profile movies: Breakfast at Tiffany's (1961), Requiem for a Heavyweight (1962), and It's a Mad Mad Mad Mad World (1963). He followed those up with The Secret Invasion (1964), another cheap (but better-made) war movie in which, like Ambush Bay, he plays a thoroughly unimportant supporting part. By 1965 he was working for AIP, guest starring as "Peachy Keane" in How to Stuff a Wild Bikini.

If Rooney looks particularly dispirited in Ambush Bay, he had good reason to be: first he fell ill, requiring hospitalization. While in hospital, Rooney learned that his wife of seven years (and the mother of four of his children) had been murdered by her lover, bodyguard-turned-actor Milos Milos in an apparent murder-suicide in the Rooney home, using Rooney's own chrome-plated revolver.

One other note: Richard LaSalle, who wrote movie music mostly for cheap, independent productions such as this, shamefully cribs one of the main themes from Malcolm Arnold's score for The Bridge on the River Kwai (not "Colonel Bogey"). Too bad as the picture's score otherwise is one of the better components of this thoroughly forgettable movie.

Kino's Blu-ray, licensed from MGM, looks just okay. The movie opens with a long nighttime scene, which appears artificially brightened and is less film-like than the stronger, daytime scenes. The DTS-HD Master audio (English mono only) is a bit on the thin and tinny side, but adequate. The disc itself is region A encoded.

The lone supplement is a trailer, which struggles to make the film look more expansive that it is.

Utterly uninteresting and brimming with war movie clichés, feel free to pass on Ambush Bay. You won't be missing much. Rent It.