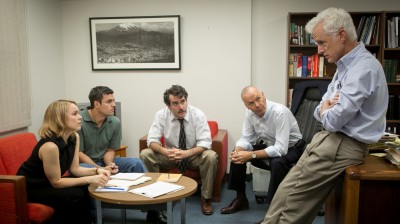 When it comes to Spotlight, a fictionalized adaptation of a true story concerning a group of Boston Globe reporters uncovering the Catholic Church's institutionalized cover-up of priests sexually abusing children, we finally get a journalism procedural that's as effective, thrilling, infuriating, and excellently executed as All The President's Men. Just like the best of procedurals, Spotlight stays away from obvious emotional manipulation while focusing on the cold hard truth of the heavy subject matter it examines. This way, it proves itself to be much more emotionally engaging than what a more melodramatic approach would have yielded.

Spotlight manages to up the ante for the genre because it finds a way to extract a profound emotional response from the audience via a fairly dry procedural tone. Of course, on the surface, the general audience will feel more of an emotional connection to the plight of hundreds of children being abused with no one being held responsible for it, than a US president being involved with a criminal activity back in the early 70s. But there also have been many films made about the Catholic child abuse scandal and the ongoing cover-up, but I believe that the reason Spotlight stands out has a lot to do with Tom McCarthy and Josh Singer's airtight script, McCarthy's patient and focused direction, and the subtle yet occasionally heart wrenching performances by the impressive ensemble cast.

The film focuses on Boston Globe's Spotlight team, who spend upwards of a year investigating a single issue in order to deliver an incredibly insightful and well-researched article on said issue. It's the early 2000s, and Globe's new editor Marty Baron (Live Schreiber) has to figure out a way to compete with the emerging online news markets, so he taps the Spotlight team to go after the Catholic abuse scandal. Everyone in Boston knows about the church's influence over the town and won't touch the issue with a forty-foot pole, but Baron is an outsider, so he approaches the story just like he would any other one. Sometimes, you need an outsider's perspective in order to deal with a problem that's staring you right in the face.

At first, the team, which consists of respectable journalists like Mike Rezendes (Mark Ruffalo), Sacha Pfeiffer (Rachel McAdams), and Walter Robinson (Michael Keaton), think they're going after abusive priests that number a little over 10, only to eventually discover that the cover-up involves hundreds of such priests being transferred without being held accountable for their despicable actions. As the Spotlight team begins to realize the gravity of this problem, they gradually come to terms with how personal the issue might be to them. Mark is an atheist who grew up as a strict Catholic, and he's the central character in terms of building an emotional bridge with the audience. A heartbreaking monologue about the importance of the church to Mark's childhood, delivered beautifully by Ruffalo, is key to understanding the high psychological stakes of the story.

McCarthy makes sure that we see a church in the background of almost every shot where the journalists interview a victim of abuse, which does a subtle job of constantly reminding the audience of the overwhelming power the church has on the city. McCarthy also knows exactly when to raise the tension in this perfectly paced drama. There's a scene reminiscent of the moment in All The President's Men when Redford's character thought his life was in immediate danger. Except that this time around, the tension revolves around saving innocent children rather than saving oneself. 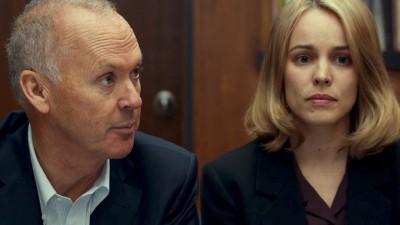 On the surface, Spotlight looks like it has a fairly flat cinematography, opting for a subtle and dry look that mirrors the film's strict procedural approach. But within the non-distracting approach lies DP Masanobu Takayanagi's impressive vision for the story. Takayanagi captures the beauty as well as the inherent sorrow of Boston in a way that perfectly compliments the screenplay. The 1080p transfer is beautiful and crisp, with a healthy amount of contrast and no issues of aliasing and color bleeding, despite many scenes taking place in a newspaper office full of fluorescent lights and blinds.

Just like the video, the subtlety of Spotlight's audio mix is what makes it so effective. The dialogue-heavy film doesn't result in a bombastic DTS-HD 5.1 transfer, but the ambient sounds that cover all channels transports the audience to Boston.

Uncovering the Truth: A 6-minute featurette with the real life reporters talking about the movie. Could have been longer.

A Look Inside: A 2-minute glorified trailer with quick EPK elements.

The State of Journalism: Another quick EPK, about 3 minutes long. I hope that Spotlight will get a second release with more substantial extras, a-la the incredibly detail oriented director's cut release of Zodiac.

Spotlight expertly examines how any political or religious organization that's given unchecked power can ultimately become a destructive force that ruins many lives. It was one of the best films of 2015, and is one of the most essential Blu-ray purchases of 2016.