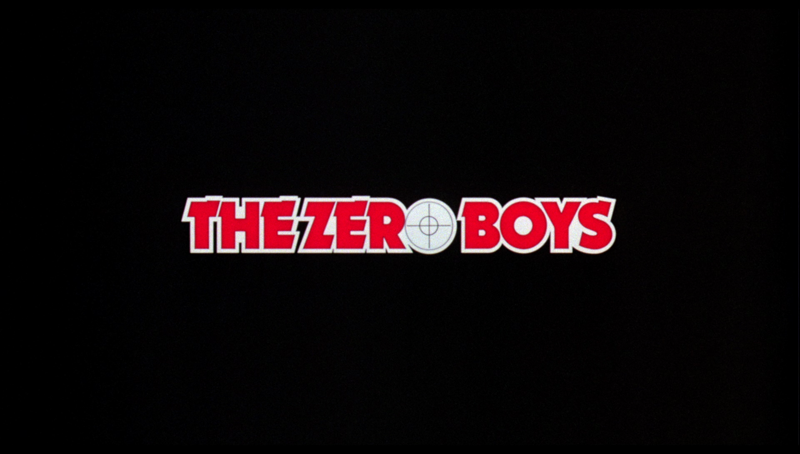 
The Movie
A classic movie pitch is "X meets Y", a combination of ideas behind two successful films to make a third, also-successful hybrid. The Zero Boys, Island of Death director Nico Mastorakis' 1986 release, is just such a beast, blending ‘80s horror with "hero with a gun" action (along with a touch of Deliverance-style rural danger) to create something unique yet familiar, as a trio of paintball-playing weekend warriors, with gal pals in tow, find themselves in the crosshairs of unknown murderers in the middle of the woods. But rather than run for their lives, these would-be victims instead take up arms and seek to take out their tormentors.

Putting his protagonists on the assault is enough to make what could have been a typical slasher film into something fresher--evident in the confidence that allowed Mastorakis to drop references to films like Friday the 13th into the script. There are touches of the new throughout the film, especially in the cinematography, which is remarkably more ambitious than other work that shared the genre at the time of this film, while the lead female character, Kelli Maroney's Jamie, despite initially being presented as property that could be wagered, represents toughness rather than vulnerability, making it stand out in a crowd. (The absence of any nudity is similarly interesting.) 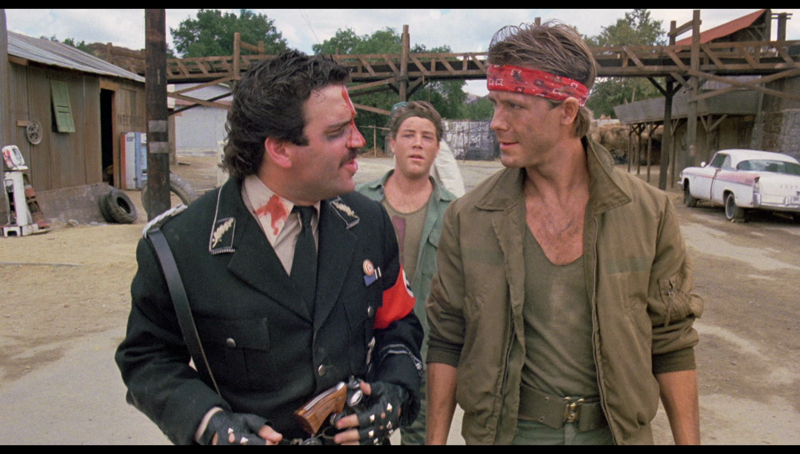 Throughout its brief 89-minute run, a large portion of which involves a slow-burn opening that introduces the characters, The Zero Boys is a legitimately weird movie. Whether it's the opening military-style gun fight in a western-themed locale featuring full Nazi regalia or the insertion of psychological theory into casual conversation, there's often something odd to behold, but it's usually intriguing as well, like the unidentified killers' use of video technology or the lack of motivation for their villainy. There's something extremely disturbing about evil that defies explanation, and that's just the case here. There's no mythology, there's no provocation, so there's no safe space and no escape. It's simply kill or be killed.

That said, there's a lot about The Zero Boys that's just not good. The traditional moronic behavior on the part of horror protagonists reaches new heights (depths?) here, as it would not be unreasonable to think that perhaps some of these characters are suicidal, otherwise, why act the way they do? You can certainly blame the writing, as the plot is sometimes absurd and there are points at which the dialogue is laughable (like when wooden spikes are described as somehow looking poisonous.) The performances don't always help either, though no one is ridiculously bad. They just can't overcome weak material. As much as remakes are a plague to moviemaking, one wonders if something great could be made from this concept, rather than just the interesting film it became. 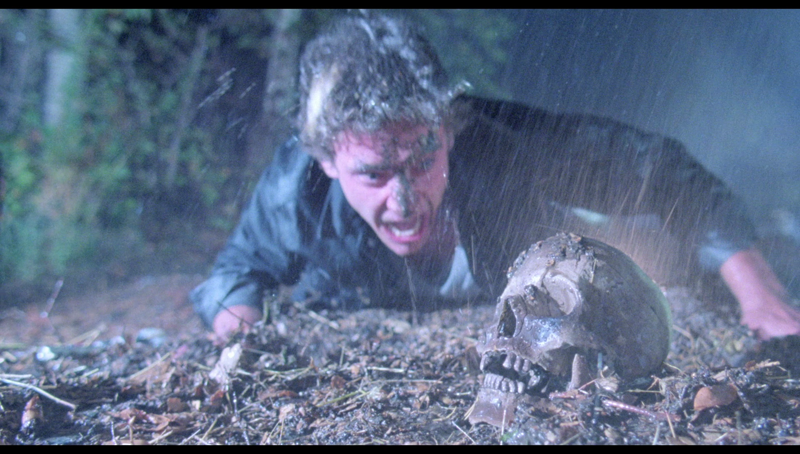 The Discs
The Zero Boys arrives in a two-disc set (one Blu-ray, one DVD), which is packed in slightly-thick clear Blu-ray keepcase with a tray for the second disc. The cover is two-sided, allowing you to choose between new art by illustrator Graham Humphreys on the retail side and the original poster art on the inside. This is the first Arrow release I've checked out, but if the clean animated menu here is their standard, it's a good one, offering options to watch the film, select scenes, adjust languages and check out the extras. There are no audio options, but subtitles are available in English.

The Quality
The 1.85:1, 1080p, AVC-encoded transfer here looks quite nice for the film's age and pedigree, There's at least one moment that shows a bit of damage (some vertical lines that are obvious when seen) and some of the darker scenes later in the film look a bit noisy (possibly due to heavy grain), but overall, color is appropriate and decently-saturated (though it definitely looks a few decades old) while the level of fine detail is nicely high. Black levels are solid and ensure the action during darker scenes is consistently legible. Digital distractions are not a concern.

The 2.0 PCM track is most notable for the score, which features work by future film legend Hans Zimmer. The synth-heavy tracks are strong and aggressively reproduced to accentuate their part in crafting the feel of the film, which is pure ‘80s horror/action. Dialogue is clear and easily understood, and, along with the sound effects, enjoys fine separation from the rest of the audio elements, though there's nothing obviously discreet about their placement in the channels. This is a presentation focused more on brute force than subtlety.

The Extras
The biggest extra is a full-length audio commentary from Maroney, with former Fangoria editor Chris Alexander acting as moderator. The track manages to overcome Alexander's moderate creepiness, as he jokes about sharing a hotel bed with the actress during the recording, by letting Maroney provide a wealth of insight about the film and horror in general, as she discusses the challenges inherent in the "final girl" concept and the changes in the genre over the decades. There's a lot of good info here, including talk about working with Mastorakis, non-contract nudity, guerilla filmmaking and the movie's finances. Perhaps most interestingly, Maroney offers an apology for language her character uses that wouldn't fly today.

There's more from Maroney in the 8:20 "Zero Girl", a 2015 interview focusing on the experience of working with Mastorakis and the low-budget filmmaking environment. The 8:30 "Blame it on Rio", also recorded in 2015, offers another member of the film's female contingent, Nicole Rio, a chance to reminisce as well, with similar results.

We get to hear from Mastorakis also, as he interviews himself in his office in the 27:48 "Nico Mastorakis on Nico Mastorakis." He's obviously a character, as he jokes with himself, playing a journalist and himself. He chats about the film and its production, catches the viewer up on the cast and some now-famous members of the crew 30 years later, as well as the lessons he learned on Island of Death that he applied to The Zero Boys. A quirky interview that fits the man.

There are a pair of music videos (3:18 in all), though that term applies loosely to these clip montages set to pieces of Zimmer's score. THe music's enjoyable to listen to, so for that reason it's worth a look, but don't expect anything different from what's in the movie. The same goes for the 1:24 "Stills Gallery", an automatic slideshow of photos, though this includes a few peeks behind the camera.

The on-disc extras wrap with the film's trailer (3:09), which reveals far too much of what happens in the movie, and features the ridiculously deep-voiced narrator heard in horror trailers throughout the ‘80s.

Also in the package is a 28-page booklet featuring info about the film and this release, along with plenty of images from the film and an essay by James Oliver on the unique elements of the film. 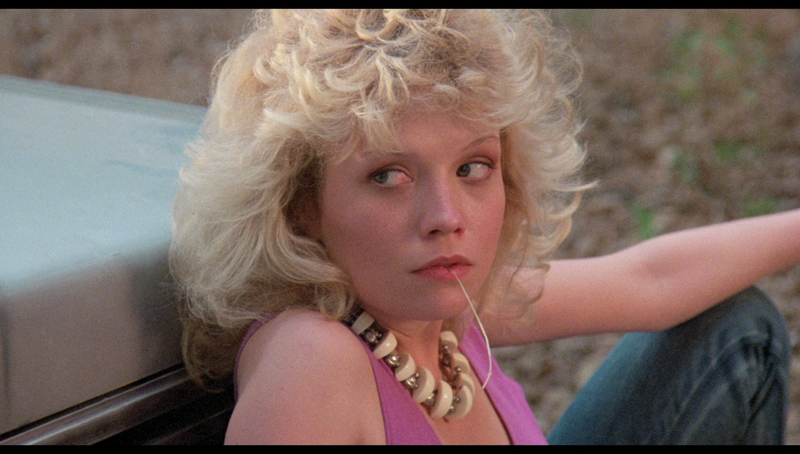 The Bottom Line
The Zero Boys offers a lot of things to like, including an interesting concept, artistic camerawork and great music, but overall it's mainly your standard ‘80s horror film with some action elements blended in, and the acting and dialogue could be much better than it is. On the other hand, Arrow has done a bang-up job of delivering a top-notch presentation and pairing it with some entertaining and informative extras. For cult-film fans and those who appreciate ‘80s horror, The Zero Boys is a prime slice of nostalgia, but it doesn't hold up well as a quality film.