During the Sundance Q&A that's included in this disc, Don Cheadle, co-writer/director/star of Miles Ahead, a technically impressive but uneven biopic about the great Miles Davis, states that he intended his film to be a love letter from him to Miles. Watching the film itself, it's hard to see what Cheadle's vision was in accomplishing that goal. You would think that a biopic about one of the greatest jazz legends of the 20th Century would focus almost entirely on depicting Davis' (Cheadle) unique approach and passion to his music. 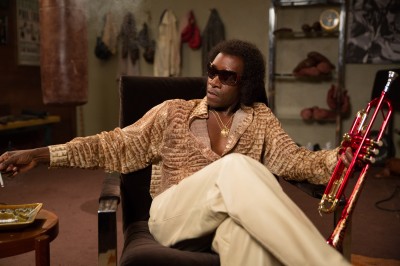 Yet in a bizarre decision, Cheadle decides to mostly avoid all of that unimportant music stuff, and instead focuses almost entirely on a heist story about Davis and a fictional Rolling Stone reporter named Dave (Ewan McGreagor) chasing a group of cartoon mobsters led by an embarrassingly hammy performance by the otherwise solid Michael Stuhlbarg. To be fair, there are quick flashbacks along the way, edited in a Slaughterhouse-Five style that makes it look like the structure of Davis' life story has become unstuck, complementing the legend's unstructured style. However, even those flashbacks mostly linger on Davis' drug addiction and womanizing, with occasional pockets where we see him toil over his art.

I know that this was a long-gestating passion project for Cheadle, and that he was extremely frustrated at being forced to add a white character to the film in order to get it made. That factor of the film's production story is admittedly frustrating, and exposes yet again some of the inherent racism still prevailing in Hollywood. However, when life gave Cheadle lemons, he didn't turn them into lemonade, but apparently tried to simply present a boring lemon on the screen.

Dave, even though he steals a considerable chunk of the film's runtime, is a nothing character without any discernible addition to the story. Davis collaborated with a lot of white musicians during his career, so I'm sure there would have been a way to integrate white characters into the story while still being able to focus mostly on the man's music.

With his staunchly dedicated performance, Cheadle disappears into the role, and turns himself into perhaps the sole reason to seek this misfire out. The visual style is also vibrant and colorful in a way that complements Davis' exuberance. Yet it's the bafflingly unfocused material that betrays all of the obvious goodwill that the film deserves. 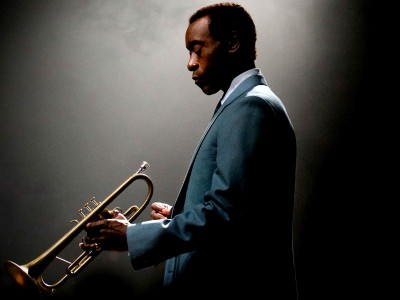 Miles Ahead has a very lively, bright, and colorful visual approach, and the 1080p transfer recaptures that look perfectly, without any video noise or color bleeding. Especially during transitions and surreal episodes where the past and the present collide, your screen will come alive.

As much as the small amount of music in the film might leave fans wanting, when Cheadle brings the horn to his lips (Yes, it is him playing), the DTS-HD 5.1 track vibrates the speakers into pure joy.

The Truth: This is a 20-minute documentary about how Cheadle prepared to embody Davis. It ironically includes more fascinating biographical information than the feature itself.

Sundance Q&A: This is an honest and straightforward Q&A with the cast and crew.

Commentary by Don Cheadle and Co-writer Steven Baigelman: This is a loose and conversational commentary that fits Davis' spirit.

Even though Cheadle does an admirable job becoming Davis, the film that he puts together is, for some reason, about a volatile drug addict who happens to be a musician, instead of the other way around.