The three-and-a-half-hour epic about the fight for a Jewish independent state in the wake of World War II and the Holocaust isn't exactly dull, but it sure is dramatically clunky, nakedly manipulative propaganda that, in retrospect, seems absurdly naïve and if not knowingly dishonest. Throughout its history, Hollywood made scads of pro-American propaganda, but comparatively few this blatant about other struggles with which most Americans had little knowledge or direct connection.

Nonetheless, Exodus was quite popular, earning $20 million worldwide against a $4.5 million budget, and it was nominated for three Academy Awards, winning one for Ernest Gold's ponderous but memorable score.

More importantly and, as intended, the movie and the Leon Uris novel from which it was based, perhaps more than anything else in any medium, shaped pro-Israel sentiment for non-Jewish Americans. Before Exodus, most knew very little about its fight for an independent nation.

Exodus reminded this reviewer of The North Star (aka Armored Attack, 1943), a Hollywood-made, pro-Soviet war movie about Ukrainian villagers battling Nazi invaders. In that film, obviously made before Russia become our longtime Cold War enemy, the depiction of the Ukrainians and their village is so ludicrously idealized that it resembles a storybook fairy tale. Exodus was shot on location in Israel and Cypress, and much of it based on historical incident, but the characters and situations are extreme homogenized stereotypes, often badly acted. 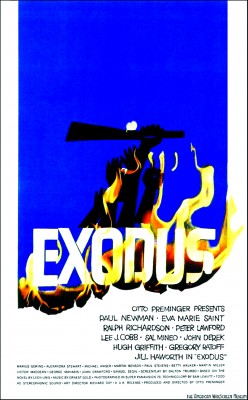 Using an awkward ensemble cast structure, the story opens in Cyprus in 1947 where recently widowed American nurse (and shiksa) Kitty Fremont (Eva Marie Saint), at the urging of sympathetic British General Sutherland (Ralph Richardson), volunteers at a Jewish refugee-internment camp. There she meets and virtually at once decides to adopt Danish-Jewish teenager Karen Hansen (Jill Haworth) and take her back to America. Karen likes Kitty but is reluctant to leave as she hopes to locate her missing father, and becomes even more reluctant as she's swept up in the Zionist movement for Israeli independence.

Meanwhile, Haganah rebel Ari Ben Canaan (Paul Newman), arranges a mass escape of 611 inmates from the camp, onto the cargo ship Exodus, bound for Palestine. British authorities block the ship from leaving the harbor of Famagusta, but the refugees, colorless in their unflinching unanimity, stage a hunger strike.

Later, in Palestine, militant Dov Landau (Sal Mineo), a survivor of Auschwitz haunted by unimaginable forced labors and having been raped by Nazis, joins the radical Zionist Irgun, a terrorist organization overseen by Ari Ben Canaan's estranged uncle, Akiva (David Opatoshu), a man diametrically the opposite of Canaan's more politically cautious father, Barak (Lee J. Cobb), leader of the diplomatic Jewish Agency. Karen and Dov fall in love, she goes to live at a Jewish kibbutz, and he bombs the King David Hotel, killing dozens. Kitty and Ari Ben Canaan flirt with an interfaith romance, all while everyone battles British and later Arab forces opposed to the State of Israel.

Though generally interesting and unusual, Exodus's structure and stereotypes, not to mention its obvious grandstanding, seriously damage its impact. One of the most interesting examples of this is the casting of Lee J. Cobb, generally typecast cast as emotional hotheads (as in 12 Angry Men), as the cautious and pragmatic Barak while David Opatoshu, who gentle, pained features suggest a victim, incapable of violence, as the leader of a radical terrorist organization like the Irgun. One wonders if perhaps each was initially pegged for the other's role, and that Preminger, clever man that he was, had them switch parts.

The awkward structure places the (melo-)dramatic high point, the harbor standoff involving the Exodus, in the film's first 75 minutes, after which most of the characters scatter across Palestine for separate vignettes. Some of this material is quite interesting, such as Dov's vetting by Akiva in a Irgun hideout, where the young suvivor reluctantly confesses suppressed traumas at the hands of the Nazis and swears a blood oath to the Irgun. (The scene that, no doubt, secured Mineo's Oscar nomination.) Preminger's staging throughout is generally impressive, and a late act prison break is well done and exciting, but the movie not once succeeds in making the viewer consciously invest in anyone's personal struggle or conflicted emotions. Instead, it brazenly attempts to manipulate its audience with syrupy sentiment and cheap shocks.

In hindsight, the movie is at times painfully naïve if not outright disingenuous. After the United Nations votes to ratify the Jewish State, Ari Ben Canaan pouts and acts surprised that his lifelong friend, Arab mukhtar Taha (John Derek), believes a Jewish State will marginalize Arabs. Newman's Jewish spokesman dismisses such ridiculous notions, saying words to the effect that Arabs have always been like brothers to the Jews and that Israel's new government wouldn't dream of annexing historically Arab land. (However, he stops short of asserting that the Zionists will be greeted as liberators.)

Newman and Preminger didn't get along, and this is reflected in Newman's shallow performance, instantly forgettable when not embarrassing. (He's quite terrible in the film's final scene, delivering a eulogy that should have been a moving call to arms.) Eva Marie Saint comes off only slightly better, occasionally rising slightly above a character that seems to serve no purpose other than non-Jewish "audience identification," and Dalton Trumbo's blacklist-busting screenplay ludicrously has her in fatigues with a rifle strapped to her shoulder, denying the character a scene that might have helped explain this radical conversion.

Except for Opatoshu and, in one brief scene with the actor, Lee J. Cobb, and maybe Mineo (some of the time), none in the cast can overcome their extreme stereotypes. Jill Haworth's Karen, for instance, is so gratingly wholesome she'd fit right in with the Von Trapp Family Singers.

Exodus was one of the first movies filmed in Super Panavision 70, a 65mm, non-anamorphic process comparable to Todd-AO and capable of rendering extremely sharp, steady, and bright 70mm release prints. Apparently MGM, licensing the film to Twilight Time, used 35mm reduction elements for this transfer, but it's still quite impressive if less so than, say, Sony's Blu-ray of Lawrence of Arabia, the Gold Standard on Blu-ray. This release is about five minutes shy of original roadshow presentations, and includes an intermission break but no overture, entr'acte or exit music. Three audio options are included, and all are impressively directional at times. Gold's music can be enjoyed on an isolated track, and a trailer is tossed in as well, along with Julie Kirgo's usual liner notes.

If only for historical reasons Exodus should be seen at least once, with the caveat that its time-specific politics and strained propagandizing are at once a reason to watch it while hurting it dramtically. Recommended.