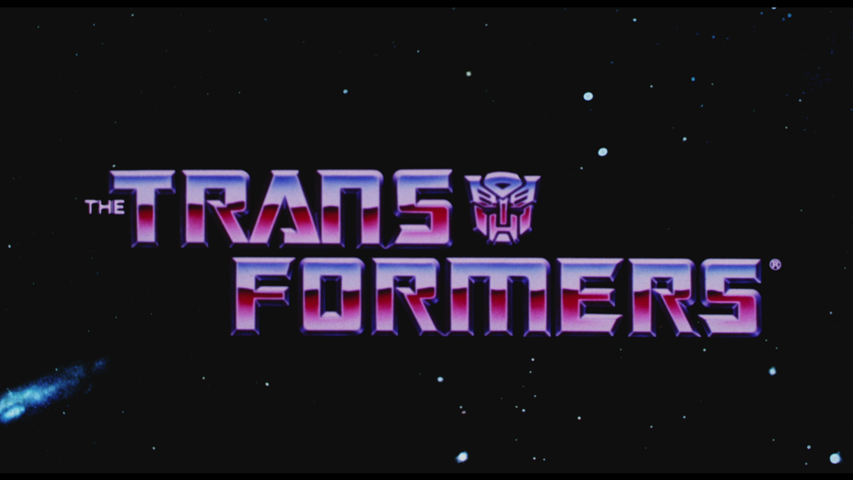 
The Story So Far...
The feature-length animated Transformers movie was highly anticipated in 1986 by fans of the TV series, and when it hit theaters it promptly crushed youngsters watching by killing off a number of popular characters in a film far more vicious than the series it emerged from. It remains popular amongst Generation 1 fans however, and has received a number of home-video releases, including a DVD in 2000 from Rhino, a region 2 DVD and a 20th-Anniversary DVD from Sony in 2006.

The Movie
It's hard to explain just what it felt like to sit in a theater as a young Transformers fan in 1986, all wide-eyed and excited to watch your favorite cartoon robots do battle on the big screen, only to find yourself horrified by a junior-varsity Tarantino-style take on the Autobots and Decepticons. It's unlikely anyone would unleash such an experience on children these days, but back in that simpler time, moviemakers whose core goal was satisfying the plans of a toy company willingly sacrificed animated heroes in the name of new product introduction. And in the process, they created a memorable mix of big-name voice acting, ‘80s-era rock and explosive action.

Though The Transformers: The Movie technically follows the series' second season, knowledge of the show isn't hugely necessary (though emotional investment in the characters is certainly suggested). Exposition is the only goal at the outset as the characters and their situations are quickly established. The film takes place in the far-flung future of 2005, where the Decepticons have taken over the Transformers' home planet of Cybertron, pushing the good-guy Autobots to bases on the planet's two moons and on Earth, with the war between the two sides still continuing. If you didn't know this wasn't going to sunshine and lollipops, the fact that the bad guys were winning should clue you in.

Things just get worse when an attempt by Optimus Prime and company to gather supplies is cut off by Megatron and his henchmen, leading to the slaughter of several of the heroes and the death of Optimus Prime, in one of the most shocking moments in action cartoon history (and likely a big reason the film remains beloved.) This whole sequence, which comes early on in the film, was and remains stunning when you consider the film was building off an after-school cartoon. The film is loaded with material that's inappropriate for the kids who would want to see it, from confusing morality to the use of legitimate swear words that wouldn't be allowed in network primetime. But it's the violence--unrelenting and graphic--that is the most striking element in the film. The look on one dying robot's face is simply haunting. 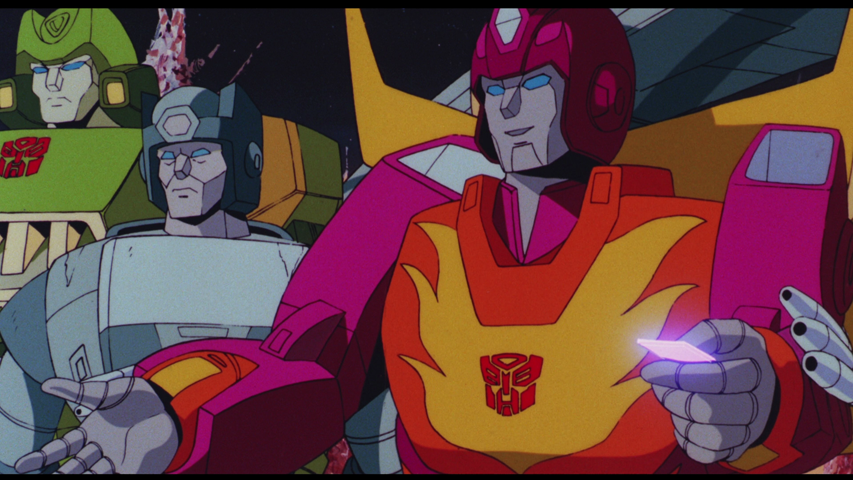 With Prime out of the picture and the Matrix of Leadership (a mysterious secret weapon with a prophecy attached to it) passed on to soldier Ultra Magnus (Robert Stack), the story refocuses on Hot Rod (Judd Nelson), a young Autobot struggling with maturity and expectations. With his side decimated, Hot Rod must step up to fill the void, aided by a group of lesser-known Autobots, as they do battle with Galvatron (Leonard Nimoy)--the new form of Megatron--after the villain is reconstituted and enhanced by living planet Unicron (Orson Welles, in, like Scatman Crothers' Autobot Jazz, his last performance ever). A series of battles and chases (featuring more and more new toy possibilities) make up the bulk of the film once Prime is dead, rarely ever letting up, outside of an odd musical moment featuring Eric Idle and a song from "Weird Al" Yankovic.

Speaking of music, there may not be a more defining ingredient to this film (other than all the death and darkness.) If you know any song from the film, it's certainly Stan Bush's anthemic "The Touch" (memorably recreated by Mark Wahlberg in Boogie Nights) but there's a load of great hair metal throughout, from Lion's fantastic take on the franchise's iconic theme song to "Dare", another great Bush tune. The score picks up where the soundtrack ends, giving every battle the right energy and each moment of emotion a boost of power, as well as a healthy ‘80s glaze.

Does the story wrap up in a satisfying way? Perhaps. It's certainly exciting (and proof you can do insane, up-close battle sequences between giant robots without completely confusing the audience--you just need to use a little color.) But it's also a bit abrupt, to the point where the final freeze-frame almost feels like a mistake. Can you really ask for more of the movie than you would of the series it's based on though? If you liked the way the show capped each episode, you won't feel slighted by the movie's finale. However carrying over the fade-outs between scenes from TV, as if commercial breaks were about to be shown, could certainly have been eliminated. 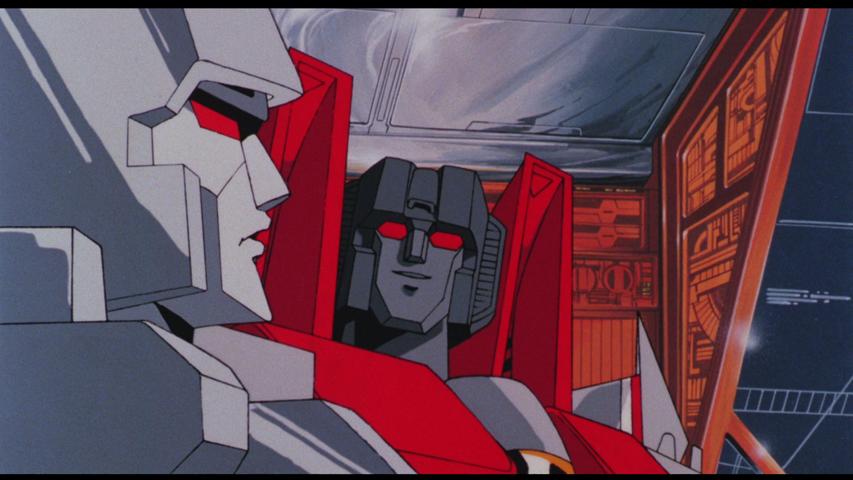 The Discs
The Transformers: The Movie arrives on two Blu-ray discs in a standard Blu-ray keepcase with a double-sided cover featuring sweet art on both sides, as well as a slipcover that repeats the more modern comic art. The mildly animated menu, featuring that terrific Lion theme cover, gives the choice to watch the film, select scenes, check out the special features and adjust the set-up. Audio options include English DTS-HD Master Audio 2.0 and 5.1 tracks, while English SDH and Spanish subtitles are available.

The Quality
The film was animated in full-frame and released in a reframed widescreen format, so Shout! Factory has provided both versions, each on their own Blu-ray disc. Per one of the extras in this set, a clean original negative was scanned at 6k in order to create these new high-definition presentations. The 1.85:1, 1080p, AVC-encoded transfer (which recreates the theater experience), looks terrific for much of the film, with bright, vibrant color and excellent detail, allowing the work in the animation (particularly in terms of the drawing and color) to clearly show (to the point where a few missing lines really stand out.) Black levels are deep, grain is consistent and there are no notable issues with digital distractions, however, for as much work as was put into creating this transfer, it's far from perfect, with a handful of rather obvious bits of dirt throughout, a jittery opening production credit and some odd moments of softness here and there. Overall, the film looks great, but one wonders why it doesn't look as pristine as one would hope.

In listening to the 5.1 DTS-HD Master Audio track, it's hard to miss how present the bass is, even if you're not getting a constant sense of thudding in the mix. Instead, there's an oft-present heaviness to the sound, which underscores the hair-metal music and the clash of the giant robots, making the sound mesh well with the visuals. The rear and side speakers serve mainly to amplify the music, with some light spillover of the dialogue (with occasionally discreet placement in the sides.) Though the sound won't stand up to comparison with more modern blockbusters, it does the trick of putting you in the middle of the battle without sacrificing clarity in the voices.

The Extras
Disappointingly, a good deal of the extras found on the 20th-Anniversary DVD didn't make the cut on this release, including the fan commentary, the pop-up trivia track, the art gallery, the Cinex test, the Japanese episode (with fan commentary), the Easter eggs and the vintage toy and Japanese cartoon commercials. We do get to hear the commentary from story consultant Flint Dille, actress Susan Blu and director Nelson Shin. Shin's language barriers lead to quite a bit of repetition and a lower profile on the track, which is dominated by Dille, who acts something like a moderator and has plenty to say about the franchise, in a somewhat sarcastic Jason Sudeikis-like voice.

A trio of featurettes were also carried over from the 20th-Anniversary disc, including "The Death of Optimus Prime" (5:02), "The Cast and Characters" (10:02) and "Transformers Q&A" (13:03). As these are built on interviews with Dille, Blu and Shin, there's a lot of repetition from the commentary, but these are a few added tidbits of info (mainly in the somewhat silly Q&A section) and the presence of two producers adds some additional perspective (including talk of the expletive and the film's impact on the G.I. Joe movie.)

The archival material wraps with a trio of "animated storyboards" (12:05 in all), which is a bit of an exaggeration for what's essentially a slideshow of storyboard sketches accompanied by dialogue, music and sound effects. One sequence (the battle between Prime and Megatron) includes additional battle beats that were deleted, which wa a wise decision. There also a pair of theatrical trailers (3:05) which do a weak job of selling the film, and seven TV spots (5:52)--a hype-heavy reel of slightly varied ads, as well as a sweepstakes promo and a tie-in toy ad.

There are a few new pieces of bonus content, including the 46:32 "Til All Are One", an impressive look back at the film, featuring several members of the cast and crew (none of the big names are on board though.) They discuss the production effort, share stories from the recording booth and reflect on the film's legacy, in a piece that animation fans will without a doubt enjoy, though between the commentary and featurettes, you've heard some of it before. That doesn't take away from the quality of the piece itself, which is well-made and fan-friendly.

"Rolling Out the New Cover" (4:49) features comic artist Livio Ramondelli, who currently draws the IDW comic book series. He provided the new artwork for this release, and here he walks you through how he drew the art, from the concept to the illustration and the coloring, giving a peak at some rough drawings. It's a good pairing with "Transformers: The Restoration" (7:16) another process piece, which walks you through how the folks at FotoKem cleaned up a 30-year-old animated movie, from the scan to the clean-up. Examples of the changes are provided to show how different this new transfer looks.

Also in the package is a code for a download of the film. 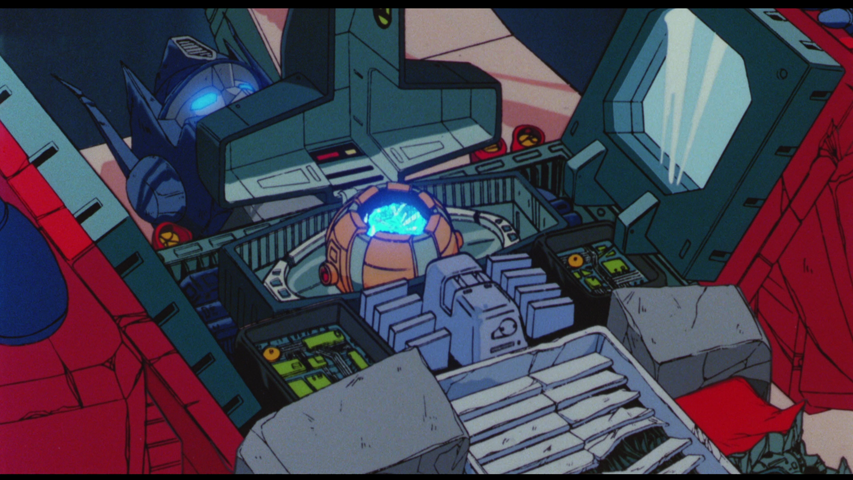 The Bottom Line
For a film that was motivated by toy sales more than any creative impulse, the results were surprisingly good, as the film loads up on the big robot battles as well as the peril to the heroes, which made it feel different than any other cartoon of the time. If the good guys could be massacred, then the villains are that much scarier and anything could happen. It's still not fine art, but it's definitely a good time. Shout! has done a nice job of giving the film a polish, making it look better than ever (even if some blemishes remain) and have delivered a few solid new extras (though no one should get rid of their 20th-Anniversary DVD.) Fans will want to add this to their collection, though the existence of a 6K scan all but ensures a UHD version is coming down the pike someday.