Writer/director James DeMoneco must have this quote framed in his office. Here's a man who's so dedicated to creating a great movie out of his one simple premise, that he's willing to remake it over and over again until he gets it right. Usually when a horror film makes enough money to be turned into a franchise, the creators want to move onto different ventures, leaving the studio to hire up and coming filmmakers to continuously ape the style and tone of the original until the sequels stop making enough money to be considered profitable. 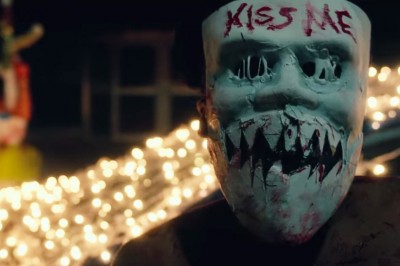 However, DeMonaco is the exception, since he wrote and directed all three of the Purge movies so far, and shows no sign of stopping. The first two films in the series were forgettable and ineffective distractions that squandered an interesting concept that was ripe for balls-to-the-wall left wing exploitation entertainment. The Purge was a run off the mill home invasion thriller that happened to have the concept of the purge in the background. The purge, as you must now be very familiar with after three movies about it, is an annual 12-hour period where all crime, including murder, is permitted in order to "purge" the citizens of their evil desires so they won't commit crimes the rest of the year.

The rushed sequel, The Purge: Anarchy, brought us what we wanted out of this concept all along: A bunch of characters trying to survive through the night in a metropolitan city where the purge is wreaking havoc. The concept itself was finally brought into the foreground, but DeMonaco once again squandered any chance of a balance between gruesome and gritty horror and brutal political satire by putting together a standard slasher flick about a bunch of personified horror cliches being picked off one by one.

After three tries, DeMonaco finally gets that balance right, this time placing politics front and center into yet another "survive through the city during the purge" story. The Purge: Election Year is a prime piece of left wing exploitation, a grimy and brutal political satire disguised as survival horror, or vice versa. Election Year is basically a remake of Anarchy, centering on a group of characters who have to band together in order to survive the night. However, Election Year tells a much more engaging and efficient story for one clear reason: Relatable stakes. Anarchy was about a group of paper-thin characters who made such horrible decisions that you almost rooted for them to die. It was almost saved by the mere presence of Frank Grillo in a lead role (Let's face it, the dude secretes badassery), but he wasn't given much to do.

This changes in Election Year, where Grillo's character, Leo, is now in charge of security for a Hillary Clinton-esque presidential candidate, Senator Charlie Roan (Elizabeth Mitchell), who vows to end the purge after her entire family was killed. Of course the powers that be, the "New Founding Fathers", will do anything to stop her, so they send a crack team of assassins to take the senator down. And won't you know it, the only hope she has of surviving the night is Leo's skills in straight up annihilating fools. So right off the bat, the stakes in the screenplay are much higher than anything we've seen before in the previous Purge films, since the senator's survival is directly linked to stopping the deaths of millions of innocent people every year.

There's no way that DeMonaco could have known the details of our crazy real life election year while in production of his sequel, but the whole thing feels like it was tailor made for current events. Apart from the distinctly Clinton-Drumpf feel of each side, there are also lines that seem to directly reference the Drumpf campaign, even though the screenplay was written before he was the Republican nominee, like the idea of being pro-purge as a way of not bowing down to political correctness. A background detail about police officers and authority figures picking off innocent people of color in order to decrease their population presents a clever satirical look at a serious subject matter that plagues our society today.

The chemistry between Grillo and Mitchell, as well as a group of survivors played by Mykelti Williamson as a man trying to protect his corner store, and Betty Gabriel as a fearless doctor who drives around the city in order to help the wounded, is top notch. Williamson's part especially brings the story a much needed emotional heft. DeMonaco also does a good job of building conflict throughout his story, constantly raising the stakes for our protagonists until we reach the bloody and explosive climax.

As better as The Purge: Election Year is compared to the series' predecessors, it's still far from perfect, and suffers from the many issues found in the previous installments. DeMonaco's still not tired of his jittery and gaudy visual aesthetic as a way to extract cheap scares, with his now trademark extreme close-up shots of "Creepy masks staring into Dutch angles", which is as scary as a leisurely stroll through a makeshift Halloween ride in a small Midwestern town. And the details of the concept still doesn't make sense, since DeMonaco creates a world where the only crime ever committed is a psychopathic desire to kill random people. Fine, it's an allegory, but it's hard to ignore the logic issues in the concept alone when the tone is one of gritty political satire. 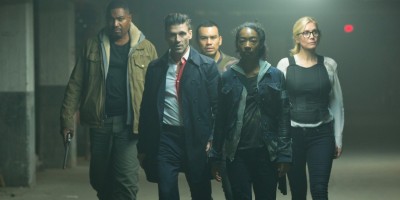 Jacques Jouffret is as embedded into the Purge movies as DeMonaco is, still having the three Purge movies as his only credits as a DP. Therefore, the trademark grimy and dark look is back once again, good or bad. The 1080p transfer faithfully represents the deep black levels, the heavy grain and of course, the Dutch angle close-ups of creepy masks.

This is the most action-heavy Purge film yet, so be prepared to have your surround system get a workout during the many intense shootout scenes. The DTS-HD 5.1 transfer has great range and is surround heavy.

Deleted Scenes: 8 minutes of excised material, none of which really adds anything to the story.

Inside The Purge: A 5-minute EPK that uses more clips from the film that you already have available on the Blu-ray than introspective interviews.

Character Spotlight: A very brief piece about the characters. Nothing special here.

Even though it carries the many technical handicaps of the previous two films, The Purge: Election Year finds a devious balance between political satire and straight exploitation. The ideological kinks related to the overall concept are still not resolved, but this is the first movie in the series that's a blast from beginning to end.