Arrival is nothing short of a cinematic miracle: A big budget mainstream Hollywood release with the passion and creativity of a plucky little indie. An adult story that doesn't rely on easy and manipulative action set pieces and eye candy special effects, but instead opts to ask some hard questions about how us humans relate to the universe, to time, and ultimately, to ourselves. A hard science fiction opus that, like the best examples of the genre, uses seemingly clinical and dry science to dig deep into our existential connection to time and space. Who knew that the most human story of the year would come out of a movie about aliens? 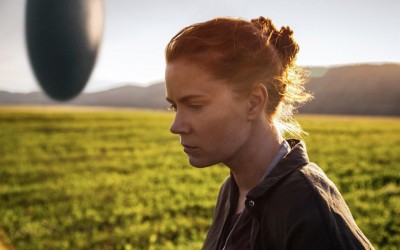 If you've seen the trailers, you might have been intrigued by the story's unique approach to yet another alien contact premise, showing it from the point of view of a linguist who struggles to communicate with the mysterious creatures. That's an intriguing jumping off point, to be sure, but Arrival proves itself to be much more than the tiny crumbs that the film's marketing brilliantly threw at us. The way that screenwriter Eric Heisserer adapts Ted Chiang's short story titled "Story of Your Life", gradually turning an epic global alien invasion story into a deeply personal yet universally potent study on the resilience of the human spirit as it relates to the choices we make as we handle our limited time in this world, is nothing short of revolutionary.

I won't give you any plot details other than what you already got from the film's marketing, which basically gives you the tip of the iceberg as far as the many incredibly well-established and awe-inspiring twists the story gradually doles out are concerned. Expert linguist Louise Banks (Amy Adams) is called in by the US government to try to communicate with mysterious alien beings that landed 12 smooth, half egg-shaped spacecraft all across the world. As Louise and her scientist partner Ian (Jeremy Renner) struggle to figure out the aliens' motivation, a couple of other nations declare war on the creatures, forcing Louise and Ian to put their lives at risk as they struggle to get to the bottom of everything before an intergalactic war possibly wipes out most of humanity.

Even though I wasn't a big fan of some of his work, I've always known that director Denis Villeneuve would eventually construct a masterpiece. He's the kind of meticulous yet passionate filmmaker who brings a unique vision to every project, despite the many possible shortcomings of other elements (The screenplay for Prisoners, cough, cough). After striking it out of the park with Sicario, the excellent thriller about the corruption between the Mexican drug cartels and the DEA, he ups the ante with this modern science-fiction classic. He deftly creates a patient, languidly paced, yet tightly structured and always fascinating narrative. 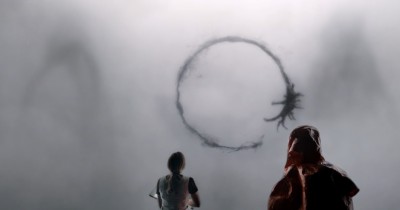 Most Hollywood films about alien contact rushes through the excitement the characters feel about the first contact with intelligent life from space. After all, we have all those expensive action set piece to get to, where the humans and the aliens go tete-a-tete while entire cities go Boom!! Arrival revels in the awe and other overwhelming emotions that we might feel when confronted with alien life. The scenes that focus on simple contact, like a character touching the edges of the alien ship while being overcome with multiple strong emotions, are more exciting and exhilarating than a hundred alien invasion action extravaganzas. The minimalist design of the ship and the aliens, as well as Villeneuve's dedication to steer clear from easy and exploitative action scenes, allow us to focus on the core themes of the story. Even a gunfight sequence that organically makes perfect sense within the story is handled with quick cutaways and simple but effective use of sound.

I get the feeling that an important personal choice Louise makes near the end of the film will spark many conversations. On the surface, it seems like a simple, almost even maudlin, way to end the story. But it's also possible to look at that choice as a selfish or even a cruel one. Yet the true achievement of Arrival lies in the way that it can present such a human question from what appears on the surface to be a run off the mill Hollywood alien invasion movie in the first place. This is easily one of the best films of the year.