Kino // Unrated // November 22, 2016
List Price: $29.95 [Buy now and save at Amazon]
Review by Stuart Galbraith IV | posted January 4, 2017 | E-mail the Author
A mystery-cum-horror movie all-too-clearly cashing in on Universal's success with The Wolf Man (released December 1941), Fox's The Undying Monster (November 1942) is an atmospherically directed but talky and tame thriller, despite an excellent first act. Derived as much from Fox's earlier B-mysteries, especially their Hound of the Baskervilles (1939), it's extremely well-crafted with a lot of big studio polish, but as audio commentator Tom Weaver astutely points out, the Jessie Douglas Kerruish's 1922 novel from which it was adapted is a prolix, cumbersome mess; the leads are miscast, there's not enough of the monster, and a wrap-up scene at the end (possibly to appease British censors) is maddeningly illogical in its contradictions.

Still, for years The Undying Monster was one of the more difficult ‘40s horror titles to see, and for John Brahm's direction alone the picture is worth viewing once.

Today commonly known as "horror's second cycle," the genre was resurrected with Universal's Son of Frankenstein (1939), a substantial hit and, fueled mainly by that film's producer, Universal, it thrived until grinding to an abrupt full stop in 1946. With its Frankenstein, Wolf Man, and Dracula movies (sometimes all in the same movie), its haunted house thrillers, Inner Sanctum mysteries, and Mummy romps, Universal was by far the most prolific. But, owing to their successes, the other studios took notice and each dipped its furtive toes in the genre Universal all but owned. The Val Lewton-produced horror films for RKO proved better, certainly more atmospheric and even poetic compared to Universals; Columbia made a series of Boris Karloff mad (and not-so-mad) scientist films and The Return of the Vampire (1943) with Bela Lugosi, and so on. The Undying Monster was Fox's first foray and the results are mixed at best 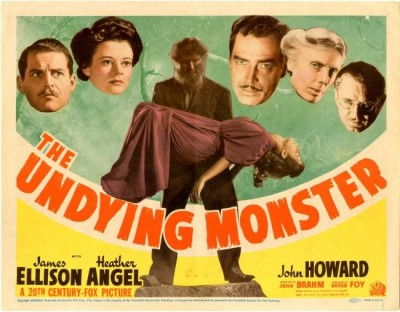 In 19th century England, the Hammond family has been cursed since the Crusades, with the latest fog-shrouded attack by the unseen monster on Oliver Hammond (John Howard) and the nurse of family friend Dr. Jeff Colbert (Bramwell Fletcher), thus attracting the unwanted attention of Scotland Yard.

They dispatch scientific Detective Robert Curtis (James Ellison) and his wisecracking middle-aged assistant, Christy (Heather Thatcher), to investigate. The investigation is barely tolerated by Oliver's sister, Helga (Heather Angel), and after an exciting first couple of reels, the movie gets bogged down in a lot of talk and familiar haunted house-mystery movie trappings. Some of this involves the suspicious maneuverings of Walton (Halliwell Hobbes), the butler, scenes that play an awful lot like John Carradine's Barryman in Hound.

Tom Weaver's superb audio commentary pinpoints precisely The Undying Monster's attributes and failings. Fox's B-unit excelled at atmospheric mysteries, and while many of the film's impressively cavernous sets undoubtedly were repurposed from a larger, A-movie production, they along with Braham's direction and Lucien Ballard's moody cinematography make the film look far more expensive than it was.

But, as Weaver points out, it also attempts to adapt a dated, dreary, and pointlessly complex novel with chapter-upon-chapter of backstory and precious little monster action of the style Fox set out to emulate.

Also as Weaver points out, Iowa-born B-Western actor James Ellison was a last-minute replacement for George Sanders. Ellison, fine as the first of Hopalong Cassidy's juvenile lead companions and later as a solo star, but has zero credibility as a Scotland Yard scientist. Cleveland-born John Howard fares a bit better overall, probably due to his distinguished features (versus Ellison's all-American ones) but is never believably British, either. (Charles McGraw, another singularly American actor, makes his movie debut as the Hammond family coachman, but he actually comes off pretty good.)

But even if Sanders had done the picture, The Undying Monster would still have been awfully unsatisfying. The sets look great, the film's score captures the flavor of Universal's monster movies, Braham's direction has many nice little touches - but there's hardly any monster in it. Indeed, audiences really only get one good look at the creature, and that lasts all of maybe ten seconds. Further, for some unknown reason during much of the studio soundstage exterior scenes, the actors are frequently photographed with the camera under-cranked, instantly ruining the beautiful lighting effects and art direction with something, as Weaver states, resembling The Benny Hill Show. (One can almost hear "Yakety Sax" whenever this happens.)

The Undying Monster's greatest weakness, however, is that it can't quite decide what sort of picture it actually is. On one hand, Ellison's scientific detective is on hand hoping to provide a logical explanation for the ages-old Hammond Family curse, but that's at odds with what the audience sees: among other things, monster hair that vanishes into thin air, and a monster transformation scene witnessed by most of the film's principals. And yet there's a Psycho-like, let-me-explain-it-all-to-you wrap-up that tries to convince the movie audience that everything they've just witnessed didn't really happen, that it was all a figment of everyone's imagination. In other words: we just wasted 63 minutes of your precious time. Sheesh.

First released to DVD as one third of "Fox Horror Classics" (with the superior Hangover Square and The Lodger), The Undying Monster is worth the upgrade, picture-wise at least, to Blu-ray. Blacks and inky and enormous detail in the 1080p image is apparent. The 1.0 DTS-HD Master Audio is fine and the disc is region A encoded.

Tom Weaver chalks up another exhaustively informative (and funny!) commentary track, aided by the director's daughter, Sumishta Braham, film score historian David Schecter, and monster movie researcher Dr. Robert J. Kiss. Indeed, it's so good you won't mind sitting through the picture three times - once for the movie, and twice to wade through its two (!) commentary tracks. Only complaint here is a technical matter: Weaver sounds like he recorded his track inside a dirigible hanger. Supplements from the DVD have also been repurposed: a 2007 restoration comparison; an animated image montage; trailers, and an alternate title sequence, and "Concerto Macabre: The Films of John Braham" featurette.

Notably disappointing but still worthwhile because of Braham's direction and for Tom Weaver's audio commentary track, The Undying Monster is Recommended.