Universal // Unrated // August 30, 2016
List Price: $34.98 [Buy now and save at Amazon]
Review by Stuart Galbraith IV | posted January 31, 2017 | E-mail the Author
One might reasonably have thought that the hospital-set television drama had run its course. After years of tame shows like Medical Center and Emergency, the groundbreaking trifecta of St. Elsewhere (1982-88), Chicago Hope (1994-2000), and ER (1994-2009), the latter two set in Chicago, would have brought the genre to what media theorists like to call its "terminal" stage, exhausting it to a point where no story or characterization has been left undone. St. Elsewhere particularly offered superb, highly innovative teleplays breaking all manner of new ground, while ER was arguably the first network series to really up the ante production-wise, with movie-like production values and medical verisimilitude. Where a show like Medical Center probably cost around $175,000 per episode, ER at its peak was budgeted at a mind-boggling $13 million per show.

And, yet, for all its déjà vu Chicago Med (2015-present) entertains anyway. The second spin-off of Chicago Fire, and part of the same TV universe that also intersects with Chicago P.D., Law & Order: SVU, and Chicago Justice, the Dick Wolf-Matt Olmstead-created series has on one hand overly familiar medical dilemmas (alleged gunman needs liver transplant from one of his victims, etc.) but also incorporates contemporary American issues (shooting occurs in multiplex cinema) coupled with the latest (and often fascinating) advances in modern medicine.

The show exhibits the same movie-like high production values commitment of Wolf's other Chicago-based shows. (The pilot opens with a spectacular train wreck.) And, more critically, its ensemble cast of characters is interesting and extremely likeable even when, again, they regurgitate character types from past shows (see below).

Universal's DVD set of Chicago Med: Season One includes all 18 episodes, as well as crossover episodes from Chicago Fire and Chicago PD. 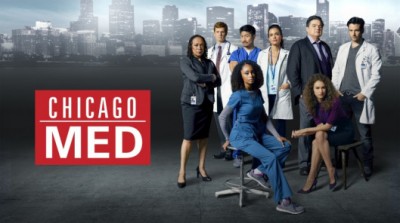 Primarily set in the emergency ward of the Gaffney Chicago Medical Center, the series introduced several of its characters in episodes of Chicago Fire and/or Chicago PD before becoming its own full-blown series. Dr. Will Halstead (Nick Gehlfuss), for instance, was initially introduced on PD as the brother of Det. Jay Halstead. ED Nurse April Sexton (Yaya DaCosta), was first introduced as a childhood friend (and later almost-girlfriend) of Chicago Fire's Kelly Severide.

Will frequently butts heads with trauma surgery fellow Dr. Connor Rhodes (Colin Donnell). Like Noah Wyle's Dr. John Carter on ER, Connor comes from an obscenely rich family but forsakes his family's business interests for a career in medicine. Pediatrician Dr. Natalie Manning (Torrey De Vitto) is a pregnant, Iraq War widow still grieving over the death of her husband and father of their imminent child.

Chief of Psychiatry Dr. Daniel Charles (Oliver Platt) and Chief Administrator Sharon Goodwin (S. Epatha Merkerson, late of Law & Order) represent the hospital's older staff. A fine actor often wasted in trivial films, Platt's Dr. Charles is an especially strong character, and Platt infuses it with much subtle nuance and likability. He's the single best thing about the show, and if Chicago Med enjoys a long run, he may be remembered as one of television's great characters.

Chicago Med's strong ensemble therefore carry stories dramatized in earlier hospital dramas as well or better before, though to Med's credit, its writers are obviously looking for ways to spin their stories to have topical relevance. Though like ER the series has its share of visceral, high-concept gruesomeness (e.g., man impaled by a falling chandelier, etc.) the basic decency and humanity of the ER doctors and nurses keeps it grounded.

Like the earlier medical dramas that preceded it, Chicago Med has multi-episode character arcs but mostly self-contained medical stories. As with Wolf's other Chicago-based shows, characters from Fire, PD, and now Justice often turn up in brief roles, typically two or three cast members per show. Pretty soon fictional Wolf universe characters will outnumber the population of Chicago itself.

Eighteen 42- to 43-minute episodes (including the crossover shows) are spread across five single-sided, dual-layered discs. The 1.78:1 enhanced widescreen shows look quite good, up to contemporary television/video standards, and the Dolby Digital 5.1 audio (available in English, Spanish, and Portuguese) is, expectedly, quite lively and full of oomph. Optional English, Portuguese, and Spanish SDH subs are available, and the discs are region 1 encoded.

Supplements are limited to the crossover episodes (one each) from Chicago Fire and Chicago PD.

Off to a good start, Chicago Med is Recommended.