What a Way to Go!

Kino // Unrated // February 7, 2017
List Price: $29.95 [Buy now and save at Amazon]
Review by Stuart Galbraith IV | posted February 21, 2017 | E-mail the Author
Extremely lavish, What a Way to Go! (1964) is an all-star black comedy headlined by Shirley MacLaine - in a role intended for Marilyn Monroe shortly before her untimely death - and features Dean Martin, Dick Van Dyke, Paul Newman, Robert Mitchum, Gene Kelly, and Bob Cummings. It's visually gorgeous to look at but not remotely funny, yet Kino's new Blu-ray makes it a must-see, if only once. 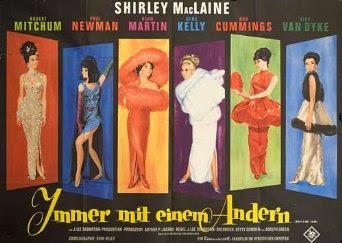 Four-time widow Louisa May Foster (MacLaine), overwhelmed with the belief that she might be cursed, unsuccessfully tries to give away her huge fortune, several hundred million dollars worth, away to the U.S. Government. Instead, she's put under the care of psychiatrist Dr. Victor Stephenson (Bob Cummings), who listens to her life story, told in flashback.

In Paris, millionaire Louisa next falls in love with pretentious avant-garde painter Larry Flint (Paul Newman). He creates a robot arm-type contraption that converts sound into canvas paintings and quickly becomes wealthy and famous, until his eventual army of painting machines revolt and murder him.

Leaving France, Louisa meets and soon falls for dour Howard Hughes-like millionaire Rod Anderson (Robert Mitchum). He seems like an ideal match for Louisa, until his controlling nature gets the better of him. In a last-ditch effort to save his soul she convinces him to retire to the life of a simple farmer, which backfires horribly.

What a Way to Go! is the type of film comedy that almost never works: big stars, elaborate sets and costumes, huge-scale sight gags, under-cranked (i.e., fast-motion) slapstick, in-joke references, and parody tossed like a salad. The psychiatrist's couch, for instance, has a hydraulic lift, and for no reason at all in one scene it accidentally rises 20 feet into the air, stranding and terrifying Louisa. This is supposed to generate a big laugh but doesn't because, like most of the film's attempts at humor, it's just a sight gag with no context. Throughout the film like-minded elaborate gags get little return on their investment.

Each marriage includes an elaborate dream sequence parodying one particular style of moviemaking. Van Dyke's imitates the look of an early silent comedy, Newman's the French New Wave (I guess), Kelly's is a big studio musical (of course). For Mitchum's segment, there's a recreation of an overproduced Hollywood star vehicle, but the problem is its parade of elaborate sets and endless increasingly flamboyant gowns is indistinguishable from the rest of movie. In other words, it's trying to parody something What a Way to Go! already is.

What a Way to Go! operates from a strange conceit, that reasonable men are driven to unreasonable extremes, losing their humanity and lives in the process, in an insatiable search for wealth and power - in a picture that revels in its own extreme luxury, populated by characters made out of cardboard.

That said, visually the movie positively dazzles. It looks far more expensive than it reportedly was ($3.75 million), and Edith Head's costumes ($500,000 alone) and MacLaine's varied hairstyles are truly a sight to behold. (A few are also quite risqué by 1964 standards, as is the final joke of this vignette.) Elaborate sets and props abound, some barely glimpsed, from the cavernous interior of Mitchum's private jet to Newman's army of paint machines to Kelly's Hollywood mansion, painted entirely in pink. On TV, VHS, and even laserdisc and DVD the awesomeness of What a Way to Go! from a production standpoint could hardly be appreciated, but on Blu-ray it's a feast for the eyes.

With one exception, the cast seems to think over exaggerated gesturing is the key to a funny performance. Newman, never good at comedy, is especially embarrassing. Only Robert Mitchum comes close to pulling off his character that, thanks to his signature cool underplaying, comes off as sympathetic and almost human. Tellingly, the film's best moment is also its simplest: hitching a ride aboard his private jumbo jet, she sits joins him in the cockpit, where he finally warms up a bit and actually smiles at the beauty of their view of Paris below them. It's the only time in the movie when the audience gets why she might have fallen in love.

Mostly though, What a Way to Go! misses by a mile. In the silent comedy recreation with Van Dyke, for instance, he uses his love and familiarity with silent comedy to move and react with real authenticity, but the segment is too crazily frenetic to have any impact. Betty Comden and Adolph Green draw heavily on other movies, including several of their own, with Kelly's segment bearing a striking resemblance to Don Lockwood's ascent in Singin' in the Rain, right down to using the very same matte painting for What a Way to Go!'s Hollywood premiere sequence, only now Kelly's playing nitwit Lina Lamont. (The Kelly-choreographed musical sequence is all over the map, partly imitative of Kelly's Arthur Freed-produced musicals, but also Hit the Deck with even some Bob Fosse-style dance moves tossed in.) MacLaine's Louisa is like an appealing Billy Wilder heroine set adrift in an unappealing, out-of-control star vehicle.

The scale of the picture's lavishness despite its $3.75 million cost might be explained several ways. Many of the sets and even some of the costumes appear to have been recycled and redressed from other movies. Even the mechanical painters Newman uses look like repurposed microphone booms ready to be junked. Newman, Mitchum, Martin, and Kelly presumably made fair less than they normally would have, given that each star probably worked less than three weeks on their respective segments.

Licensed from Fox, What a Way to Go! looks great, with impressive detail and bright primary colors that really pop on big home theater screens. The mono DTS-HD Master audio is good as well on this Region A encoded disc. The lone Extra Feature is a trailer.

Nary a thought in its head but fabulous to look at, What a Way to Go! is a rewarding viewing experience for those interested in big studio production muscle, but as a comedy it's tepid at best. Still, Recommended.