Half hard-nosed sci-fi and half standard drama thriller, Passengers meanders at a tortoise's pace to its foreseeable destination much in the same way the starship Avalon creeps through the hostile vastness and solitary of space. Transporting 5,000 colonists and crew members to the promise of new beginnings on a planet aptly named Homestead II, the journey is a 120-year voyage that suitably describes Morten Tyldum's (The Imitation Game) adventure film, which is both good and bad. Details and pertinent plot points are slowly divulged when required as we cruise through the stars and allowed to take in the sights. And this deliberate leisureliness will engage some viewers while others are likely to glance at their watch, hoping for a sooner than expected departure time. Things only speedily progress when the exterior damage inflicted upon the ship in the opening sequence rapidly mounts into a major catastrophe for the thousands of lives peacefully sleeping through their possible demise, never to know how close they came to tragedy.

The yet-unknown damage caused by an asteroid starts small and arguably insignificant with the only known malfunction being one very groggy traveler waking 90 years too early. For a good chunk of time, we enjoy the company of Chris Pratt as mechanical engineer Jim Preston frantically trying to understand what went wrong and figuring out ways to restart his hibernation pod. The castaway theme is fascinating to watch largely due to Mr. Pratt's charming screen presence, mixed with a longing to explore the entire ship, which the filmmakers attempt to satisfy but only in short glimpses. Michael Sheen also lights up the screen as the delightfully friendly android bartender Arthur, but he, too, is only served in small shot-glass doses. As a year goes by, loneliness is finally starting to take its toll on poor Jim, looking more and more like the Unabomber than ruggedly handsome space explorer. After a brief but poignantly beautiful sequence with our protagonist contemplating the meaning of it all while taking a wee stroll outside the Avalon, the plot's central theme is awaken. 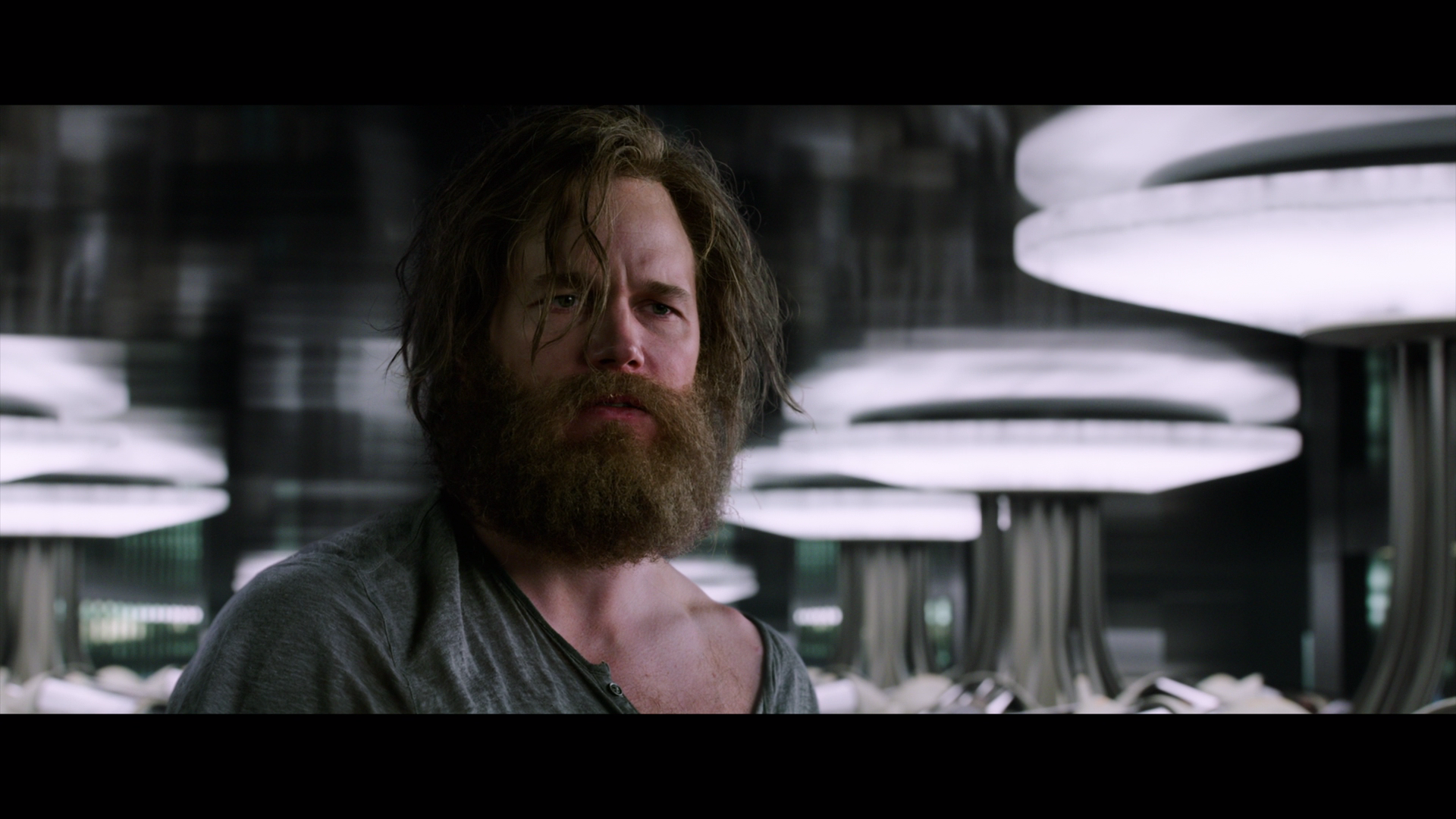 While stumbling about, Jim happens upon his own sleeping beauty in Aurora Lane (Jennifer Lawrence), which is an arguably heavy-handed name given the purpose her presence serves in Jim's bleak and darkly gloomy life. Nevertheless, James Spaihts's script posits an interesting question that looms over like a grey cloud threatening the rest of the story. It starts innocently enough like a schoolboy crush seeing the prettiest girl in class from across the room and never talking her, but it soon evolves into a troubling debate about waking her, which we know from the previews he does. Being the only two people awake, they come to enjoy each other's company, mostly with Jim showing Aurora the joys of living, eventually leading a deeper, emotional connection. Of course, the lie and Jim's betrayal, conveyed on Pratt's visibly guilty-ridden face, hovers over their relationship and the various pockets of happiness, generating an unresolved air of suspense and anxiety that never lets up, making us itch for the inevitable.

Had the filmmakers stayed with this intriguing subject matter, Passengers might have been a more gripping and absorbing sci-fi picture, true to the underpinnings of the genre. But as is often the case, general audiences expect a bit of melodrama and action, and Tyldum pacifies those expectations in the last quarter with a tear-jerking CG spectacle that single-handedly resolves the plot's more complicated issues. Not that Spaihts would leave his audience contemplating after the end credits. As seen in the last three films he co-penned, Spaihts is the master of quick and easy resolutions, and should we expect anything less in a Titanic-lite plot that gives rise to questions on social class but never addressed? Clearly, Mr. Spaights enjoys musing over morally-troubling, philosophical queries, mostly by bashing the viewer's head with it repeatedly, but refuses to fully embrace them or really ruminate over their implications for an extended period of time. When buckling your seatbelt for this voyage, bring along other reading material to enjoy during the in-flight movie. 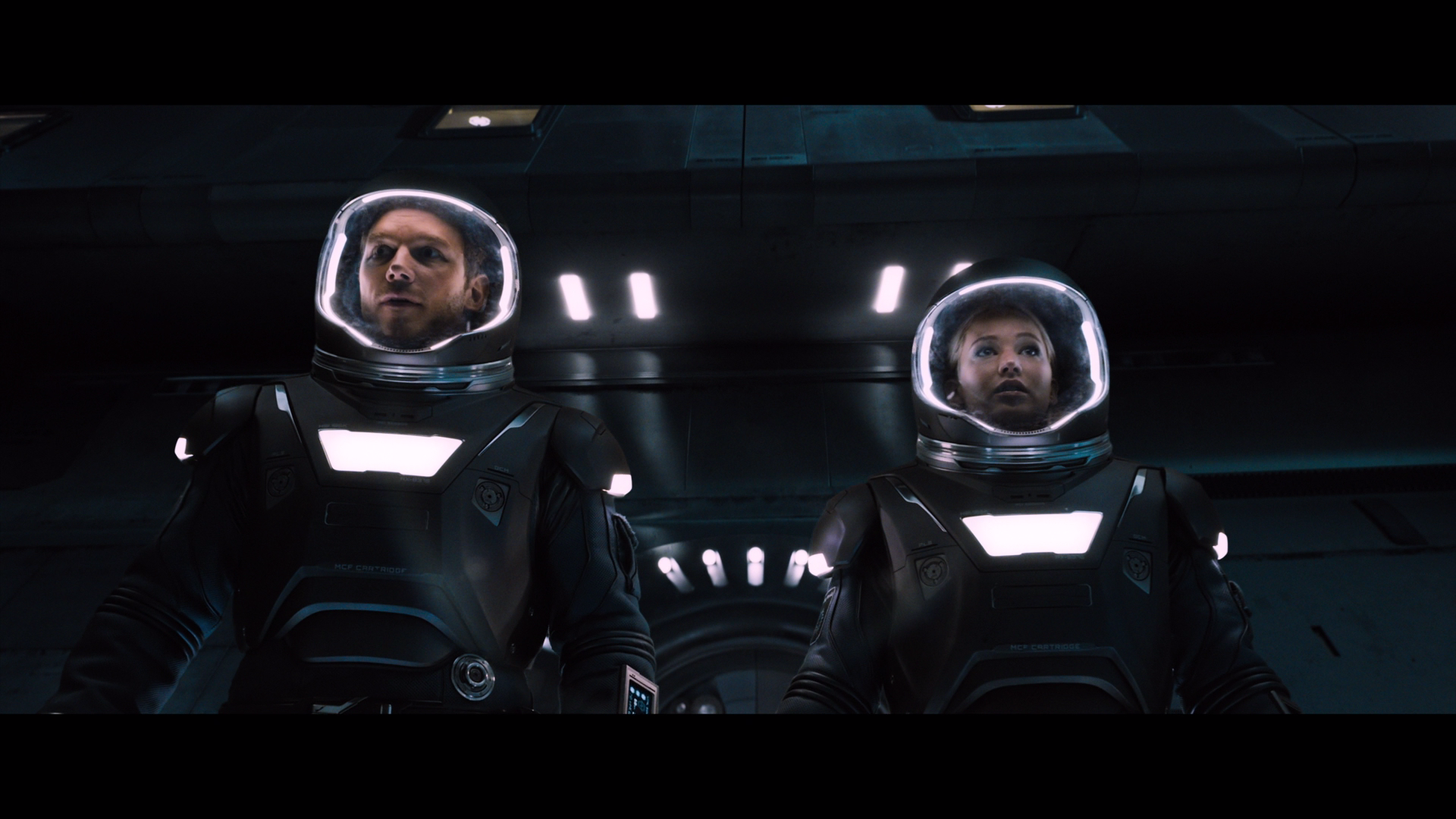 Passengers was filmed digitally on the Arri Alexa 65 camera system, which, per the manufacture, shoots natively at 6.5K resolution and later mastered into a 4K Digital Intermediate. As one would immediately suspect, the results yield a phenomenal picture with better clarity and sharpness in every scene, exposing the tiniest pore, freckle and wrinkle in the faces of our two castaways. While every fibre and thread in the clothing is distinct, the ship's design is immaculate with razor sharp edges along stairs, screen monitors and the futuristic furniture.

The real upgrade over its 1080p counterpart, however, comes by way of improved contrast and brightness, affording the entire 2.40:1 aspect ratio with brilliant, luminescent whites and exceptional true-to-life blacks. Pretty much any scene when characters either look out or travel into space can serve as demo material while specular highlights along metal objects gleam and shine with realism. Although the photography nonetheless isn't particularly colorful, the 2160p video nonetheless comes with a richer, more vibrant palette than the Blu-ray, displaying more vivid reds and warm animated yellows in Arthur's bar while other parts of the ship are showered with electrifying blues, dynamic purples and sparkling magentas.

Sadly, in spite of its mostly jaw-dropping appearance and beauty, the 4K presentation falls short of perfection due to several instances of aliasing throughout. Thankfully, this only happens along the very sharpest of edges along the fluorescent lights while the camera is moving, so it's easy to miss and not terribly distracting, making for an otherwise gorgeous-looking picture.

Accompanying the video is an equally excellent Dolby Atmos soundtrack, which is another step up over the Blu-ray, which Sony saw fit to equip with a DTS-HD Master Audio 5.1 track.

However, owners shouldn't feel hurt by the lack of additional overhead channels, as the two tracks are not all that drastically different and both deliver a highly satisfying soundfield. Besides, much of the design seems focused on employing the fronts and sides where various effects discreetly travel and pan with flawless directionality. On a few occasions, noises move above the listening area, but they are few and far in between since the characters have a spaceship all to themselves for a majority of the runtime. As the ship's failure worsens, specifically the fusion reactor in the last quarter of the film, activity expands into the ceiling speakers, filling the room with an enveloping soundscape.

Still, much of the runtime is a front-heavy experience where imaging feels broad and expansive, thanks to effects fluidly moving across all three channels with exceptional clarity and fidelity. Dialogue is clean and crisp from beginning to end, and dynamic range is impressively extensive, exhibiting superb distinction in the loudest, action-packed moments. The real showstopper is a demanding and wall-rattling low-end that digs deep into the ultra-low depths and provides an impactful punch to the few scenes with explosions. 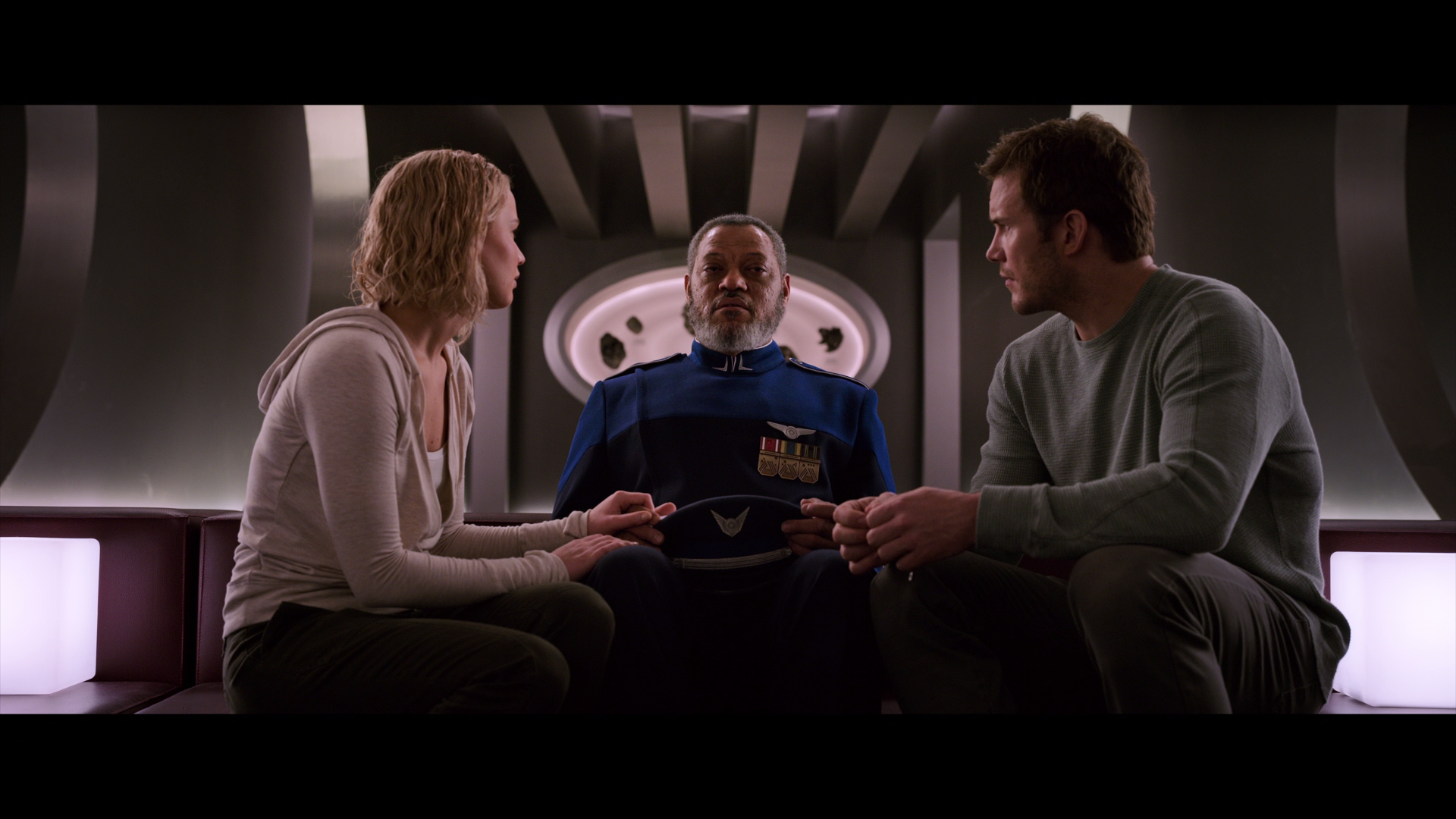 Sony Home Entertainment brings the sci-fi drama to Ultra HD Blu-ray as a three-disc combo pack with an UltraViolet Digital Copy code and housed inside a slightly thicker than normal black, eco-vortex keepcase. In addition to the 4K HDR10 disc, owners are also rewarded with a 3D Blu-ray version of the film, which appears to be exclusive to the format, and the regular Blu-ray disc contains all supplemental material, presented in HD.

Kicking things off is a seven-minute featurette on key visual effects sequences, titled Space on Screen, followed by a run-of-the-mill piece discussing and praising the performances mixed with the usual BTS footage in Casting the Passengers (11 min). Next is Creating the Avalon (10 min), which looks at the design and construction of the spaceship. Viewers are also given four minutes On the Set with Chris Pratt as he prepares for scene and briefly chats with his costar and other crew members. Finally, a set of four faux infomercials, totaling just under five minutes created by the Homestead Company, reveal what awaits the passengers of the Avalon in Book Your Passage.

Rounding out the package is a collection of eight Deleted Scenes totaling ten minutes, which don't add much value to the film, four minutes of Outtakes from the Set and a set of Previews. 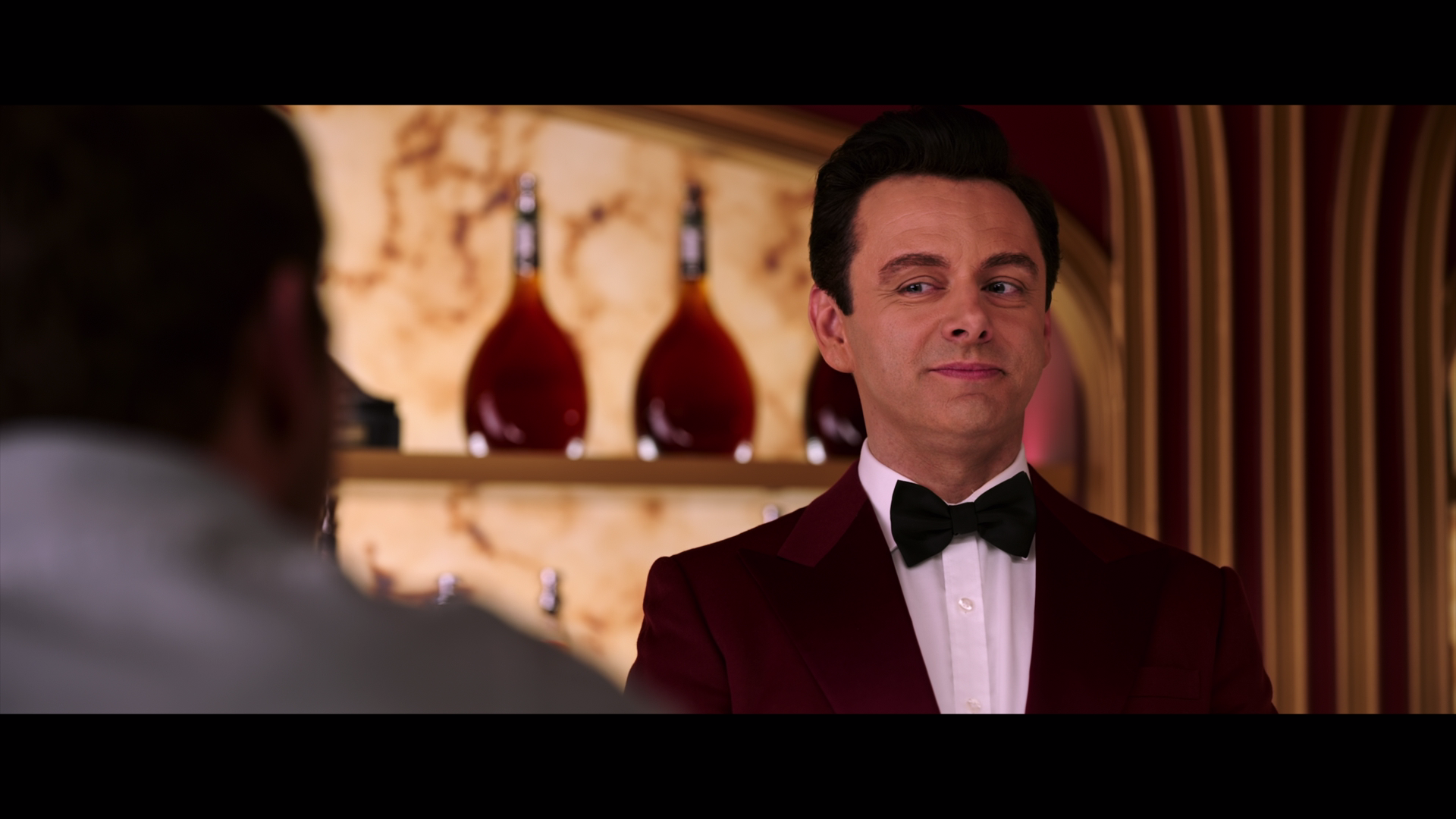 Half hard-nosed sci-fi and half standard drama thriller, Passengers meanders at a tortoise's pace to its foreseeable destination while transporting Christ Pratt and Jennifer Lawrence to the promise of new beginnings on a planet aptly named Homestead II. A cross between Cast Away meets Titanic, Morten Tyldum's sci-fi drama, from a script by James Spaihts, delivers a one-way ticket of entertainment, but it's honestly not a journey worth revisiting. The Ultra HD Blu-ray lands with a superb audio and video presentation, except for one minor defect that could ruin the travel plans. Nevertheless, with a decent set of supplements that includes an exclusive 3D Blu-ray version, the ticket might be worth the purchase price for early adopters.