A deliciously lurid soaper based on Grace Metalious's runaway bestseller, Peyton Place amazingly retains almost all the original novel's taboo subjects: abortion, illegitimacy, incest, rape, murder, this despite a slowly crumbling but still powerful Production Code. Though at times over the top in the Douglas Sirk manner, it's also an interesting attempt to peek behind the closed doors of a seemingly idyllic New England community, here called Peyton Place. 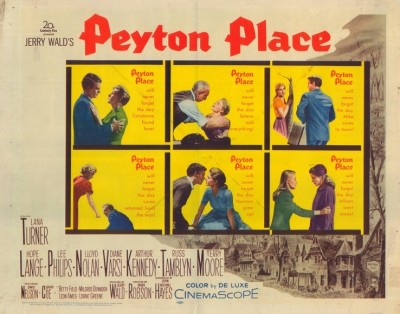 Though fading beauty Lana Turner is top-billed, Peyton Place in a sense is itself the star of the film; it's really an ensemble picture that today resembles ensemble television dramas of recent years with their labyrinthine character relationships and season-long character arcs. Turner is sexually repressed Constance MacKenzie, a respected dress shop owner and widow raising her high-school-age daughter, Allison (Diane Varsi). Allison's best friend is Selena (Hope Lange), literally from the other side of the tracks, where her alcoholic stepfather (Arthur Kennedy) sexually abuses her. Allison is attracted to wholesome, shy kid Norman Page (Russ Tamblyn, in an excellent, understated performance). In the book Norman, like the Norman in Hitchcock's Psycho, is completely dominated by a controlling mother who in the book but not the film bathes her nearly adult son. An unhealthy relationship is nevertheless implied in the film.

The pot gets stirred when a progressive, assertive high school principal comes to town. Michael Rossi (Lee Philips) is also drawn to a resistant Constance. Other subplots are introduced, including bad girl Betty Anderson (Terry Moore) and her relationship with Rodney Harrington (Barry Coe), son of the town's leading conservative (Leon Ames).

Though I was never much a fan of Lana Turner, and hers is very '50s-type characterization, the sort of thing John Waters would later lampoon in movies like Polyester (1981), the other performances are compelling and nicely nuanced, particularly by Lloyd Nolan, excellent as the town's compassionate local doctor, while Lange and Moore are also quite good as sensitive teenagers.

Movies like Peyton Place rarely get anything like serious examination by critics, inaptly written off as comfort food melodrama with bubblegum psychobabble. Many such films of the 1950s and early ‘60s have been embraced as unintended high camp, initially by homosexual men, maybe because in these films an outwardly idealized postwar middle-class utopia and the relationships therein are exposed as frauds. Under the surface, "perfect families" and "perfect couples" hide secrets far darker than trivial gender preferences, and like hypocritical politicians caught with their pants down in an airport lavatory, eventually get their comeuppance.

Author Metalious reportedly hated the supposedly sanitized film, but by 1957 standards it pushes the Production Code, just beginning to crack a little, to the very edge. Better to praise it for all it accomplishes than condemn it for not going farther, which realistically would have been impossible.

Ironically, it was an even greater, real-world scandal that pushed Peyton Place into blockbuster class: the fatal stabbing of gangster Johnny Stompanato, Lana Turner's boyfriend at the time, by Turner's 14-year-old daughter, who claimed he'd sexually abused her. The lurid publicity gave Peyton Place a big boost and the film eventually grossed $25 million, huge numbers for the period.

Filmed in color and CinemaScope, Peyton Place gets a big visual jump from DVD to Blu-ray, aided by the excellent 5.1 and 2.0 DTS-HD Master Audio mixes, adapted from the original four-track magnetic stereo elements. English subtitles are provided on this region-free disc.

Though somewhat trashy and at times bordering on camp, Peyton Place is undeniably compelling entertainment that still impresses for acknowledging with surprising explicitness a darker side of small town Americana.