Heat is one of those modern classics that should either be reviewed quickly and without much info to let the viewer experience Michael Mann's LA crime masterpiece with a clean slate, or be dissected in great detail, with all of its separate elements pulled apart to study how they eventually came together to complete such an intricately constructed work of artful storytelling. Anything in between would seldom do this sprawling yet tight and taut epic justice. And since I realize that I'm here to basically tell you if you should double dip into this new release (Spoiler: You certainly should), I won't waste too much of your time with my (certainly to be overlong) personal take on Heat. 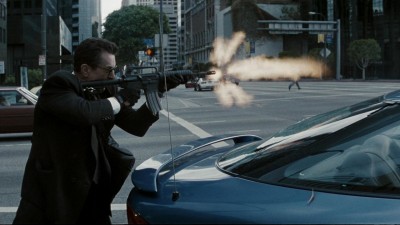 If I had to distill my admiration for Heat into one distinct quality, it's the fact that Mann found a way to turn such a basic cops and robbers crime drama into perhaps the best example of the genre. Exploring the concept of the cop and the criminal being opposite sides of the same coin is a premise that pretty much every crime drama has delved into in one way or another, if I can be so bold to steal from the great Charlie Kaufman in Adaptation. Yet Mann takes this subject on and manages to create its ultimate example. He does this in 1995, mind you, when this cliché had already been done to death by decades of movies before it. Hell, half the movies made in the 1940s relied on this premise.

By implementing, with surgical precision, an impressively pure and focused approach to this theme with a grand, boastful, and larger-than-life crime/action story, Mann pinpoints a perfect balance that pays off emotionally and analytically in equal measure. With tight and deliberately stylized genre pictures like Thief and Manhunter in his resume, it was only a matter of time for him to deliver such a quintessential culmination of his work. Heat is the most Michael Mann movie Michael Mann has ever Michael Manned. With its hauntingly cold cinematography, moody score, terrific performances by a slew of legendary stars and character actors, and let's not forget the mother of all shootouts in its center, Heat more than likely represents the peak of Mann's career.

All right, let's get to the good stuff: Is it time to riddle the original Blu-ray with bullets? Well, grab your Colt Model 733 (Full disclosure: I had to look that up. I know nothing about guns) and throw that Blu-ray in the air for some target practice. The new 1080p transfer, from a restoration supervised by Mann himself, improves the colors, making them more vibrant, and delivers stunning clarity and depth. I did some comparisons between the old copy and this one, and the difference is immediately noticeable. The softer, flatter transfer of the first release is completely replaced with this near perfect presentation. 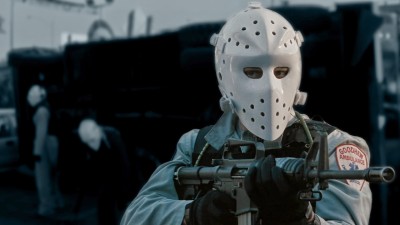 I didn't think this would be possible, but I'm more impressed with the new DTS-HD 5.1 track than I am with the video transfer. The Dolby TrueHD track from the first release was no slouch, but the dynamic range and clarity of this new track blows it out of the water. Ever since my best friend from film school showed us the shootout on a VHS copy through a Dolby Prologic system in 1997 (I'm ooooold!), it's been clear that this sequence is the ultimate in home theatre demos. And it doesn't get better than this track.

Commentary by Michael Mann: This was ported from the 2009 release, and is vital for fans to get most of the intricate details of the production.

Academy of Motion Picture Arts and Sciences: This hour-long panel shows the cast and crew talking with Christopher Nolan about the production in great detail. If you have time for one extra, make it this one.

The Making of Heat: This 30-minute featurette was ported from the original Blu-ray release. It's perfectly fine, but a new and more extended doc could have helped.

The Conversation: This 10-minute piece dissects the relationship between the two legendary actors, DeNiro and Pacino, and their characters.

Return to the Scene of the Crime: A short piece where the location manager takes us through the famous spots seen in Heat.

We also get three Trailers.

The new extra with Nolan is a nice addition, but if this release sported the old transfer, a double-dip would not be worth it. However, with the stunning new A/V presentation, even if this was a bare-bones release, it still would have been vital for fans to get their hands on this Blu-ray.

P.S: The images are not screenshots from the new release.