They Shoot Horses, Don t They? 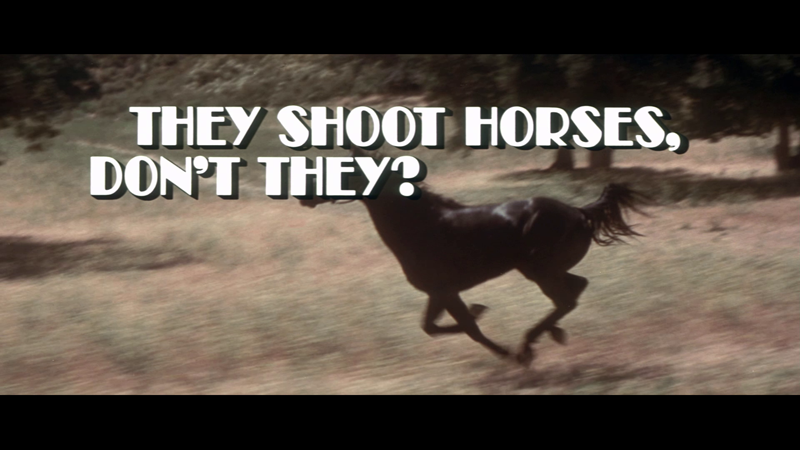 
The Movie
People tend to look back on their younger days with nostalgia and wistfully long for "a simpler time". But the reality they fondly remember is usually quite different than the reality that actually was occurring around them (even for someone who grew up in the ‘80s, a.k.a. The Raddest Decade Ever.) This goes double for those who think that the good old days happened before all the turmoil of the ‘60s, when it was certain that those days were only good for a select group of people. Sydney Pollack's adaptation of Horace McCoy's Depression-era novel They Shoot Horses, Don't They? illustrates that fact clearly by shining a light on one of the worst, yet lesser-known examples of how low Americans can go: the dance marathon.

Back in the 1930s, dance marathons served a dual purpose. They were a chance for the downtrodden to potentially achieve fame and fortune (and get something to eat), while giving the audience cheap entertainment. Events could drag on for weeks, as all the dancers needed to do was stay on their feet and keep moving, while the audience watched to see them collapse in exhaustion until a final couple was left standing. With the desperation of the Depression, the lengths people would go through to get that money meant subjecting oneself to a grueling, potentially fatal endurance test, while the audience enjoyed the base human drama of the survival of the fittest.

They Shoot Horses, Don't They? dives right into the fray with Robert (Michael Sarrazin), a penniless young man who comes across a dance marathon on a California boardwalk, and upon meeting Gloria (Jane Fonda), a partnerless woman looking to join the competition, he enters the marathon. Gloria is guarded and confident, and as the two dance, they begin to learn about each other a bit, while we learn about them and some of the other competitors, including an older sailor named Harry (Red Buttons); Alice, a glamourous actress (Susannah York) and a pregnant woman named Ruby (Bonnie Bedelia). In the film, the marathon is broken up into 50-minute segments, with 10-minute breaks, which sets the pacing, as most of the character drama takes place in the downtimes, when mental fatigue unleashes the dancers. 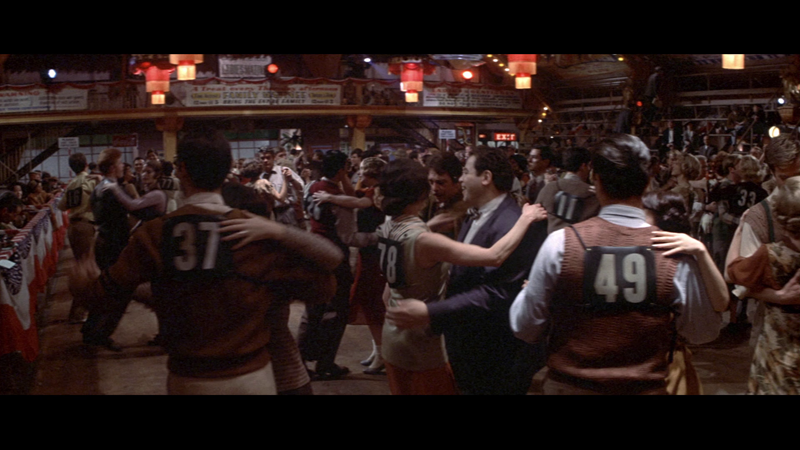 Above all of this is Gig Young, who plays Rocky, the emcee and ringleader of the marathon. Sleazy and manipulative, Young is a masterful villain, and earned an Academy Award for the performance--a well-deserved recognition. Coldly controlling the dancers and selling the drama to the audience, Rocky is the engine of the film, speaking not just to those watching on the screen but those watching the screen; a barker at the carnival of the damned. If this was a Twilight Zone episode, in the end it might be revealed that Rocky has cloven hooves, but instead, he's just another opportunist with a willing batch of victims.

As Gloria, Fonda is eye-opening, especially if you only know her from her later work. Arch and defiant, she's captivating to watch as she fights against the forces of the marathon, driven by motivation to be parceled out to both Robert and the viewer. Gloria is the kind of part that could easily be taken over the top (as is the case with any role involving a person pushed to their physical and mental limits), but Fonda keeps her performance in the right zone, but clearly gets across the breakdown she's experiencing by walking a fine line of damaged and driven. On the other hand, York gets to let loose as Alice, who hits her breaking point and smashes past that into a realm of psychosis that is something to behold. Surprisingly, despite the depths she reaches, she maintains believability, and her descent is as affecting as anything else in the film.

Behind the camera (sometimes literally), Pollack gives the film such style that it becomes hard to remember that most of the movie takes place in just three rooms, with the vast majority happening in the main hall. Part of it is the rather ingenious use of cutaways, which create some mystery and curiosity about one of the characters, but most of it is in the techniques beautifully applied. Without resorting to camera tricks (the arsenal was certainly smaller in 1969), Pollack takes full advantage of lighting, angles, sound and especially editing to make a film that's at times claustrophobic, sometimes epic and always engaging. The derby scenes (in which the dancers must speed walk around a track with the last three couples getting eliminated) have all the drama and energy of a war movie, with the last one giving Fonda a chance to truly go for it.

Not to give away what happens at the end, but if you expect something positive out of a movie about human desperation, you will not be satisfied by the conclusion of They Shoot Horses, Don't They? This film is a part of the great lineage of downbeat endings that has somewhat run dry in the past decade (at least when it comes to studio films.) That the finale pays off everything that came before it in a way you may not see coming could have made the film a sure-fire hit in the ‘90s, but now it's something of a forgotten gem, that should be studied as an example of top-notch filmmaking and fantastic acting. 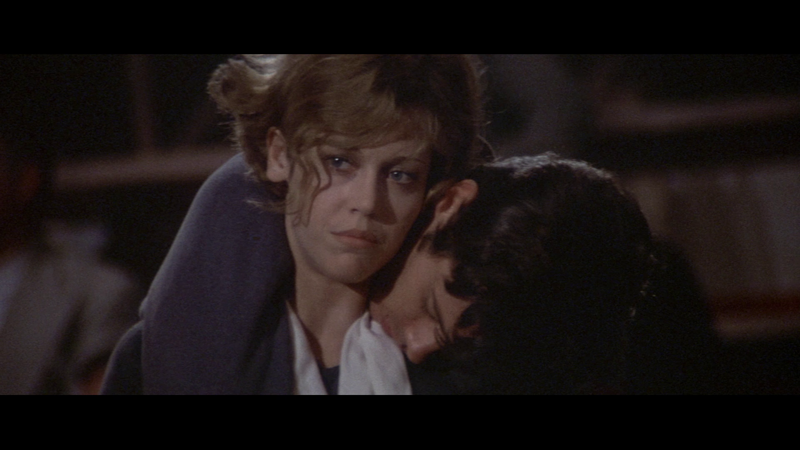 The Disc
Kino's Studio Classics line brings They Shoot Horses, Don't They? home on one Blu-ray disc, which is packed in a standard keepcase with one of Kino's great visual catalogs and a two-sided cover. On the default side, we get a brightly-colored, quite noisy image of the two leads, with an awkwardly placed circle that holds the film's title. Though this art is a throwback to an old lobby card for the movie, it doesn't speak to the tone or look of the film, and completely pales in comparison to the gorgeous reverse cover, which uses the dramatic painted art from the film's French poster (though it's admittedly something of a spoiler.) The lobby-card image returns on the disc's static menu with options to watch the film, select scenes, adjust the setup and check out the extras. There are no audio options, but subtitles are available in English.

The Quality
If you've been subjected to MGM's godawful 2004 DVD release, the 1080p, AVC-encoded 2.35:1 transfer here will truly excite you. The color--an earthy affair, as befits the setting and period--is appropriate throughout, with quality saturation and pleasing hues. The level of fine detail is quite high, allowing you to appreciate the textures of the costumes and hair (particularly Fonda's attractive waves), and for the first time it's clear there's some background nudity in one scene (further questioning how this movie is PG, considering the subject matter in many spots). Grain is consistent, black levels show no issues and the image is crisp, with no obvious concerns with dirt and damage, nor digital distractions.

The audio is presented via a DTS-HD Master Audio 2.0 track, which does a nice job of keeping the dialogue and music cleanly separate. The blaring of the break horn may make you jump with its intensity, but otherwise effects aren't a major part of the presentation. The key is the music, which mostly comes in the form of source music, since there are performers during the dance sequences. Because of the near-constant presence of the backing band, you really notice the absence of music during the break scenes, which helps put focus on what said in these moments. Overall, this is a well-mixed track with no problems with distortion.

The Extras
They Shoot Horses, Don't They? was released in a limited-edition laserdisc set in 1996 by CBS/FOX Home Video, which featured a good deal of bonus content (not to mention an autograph from Pollack.) Kino has thankfully ported over a trio of those extras, including a pair of audio commentaries. First up is Pollack, who delivers a truly informative track, even if it's not particularly screen-specific. The director covers just about everything related to the film, from the run-up to the production to technical details about the shoot. Pollack also discusses the changes that were made from the original novel, how he overcame obstacles with the help of roller skates and worked with source music, while also touching on the cynicism of ‘60s films and the importance of film preservation. Listening to the insight he shares, makes one miss Pollack all the more.

The other track is technically not commentary, but rather a series of audio interviews played over the film, with Fonda, Sarrazin, Bedelia and Buttons, producers Irwin Winkler and Martin Baum and, in one of the more unique inclusions on an extra, hairstylist Sydney Guilaroff. Between the seven participants, there's not much that's not covered, whether it's the people who worked on the film, how they came to be involved with the film, the movie's legacy and even some material that didn't make it into the final film. The most interesting portion has to be the rather honest discussion about the effort to remove the original director from the production. There are some unfortunate gaps of silence (one assumes in order to space out the interviews across the length of the film) but overall, there's so much great information shared here.

Also carried over from the laserdisc is a 6:29 making-of featurette, an EPK promo made about the film at the time of production. It includes a bunch of on-set footage as well as some background on the history of Depression-era stunts like the dance marathon, but it's rather dated thanks to the production style. Unfortunately, the still gallery from the laserdisc wasn't included here.

The remaining extras are a pair of trailers, one for They Shoot Horses, Don't They? and one for Coming Home. 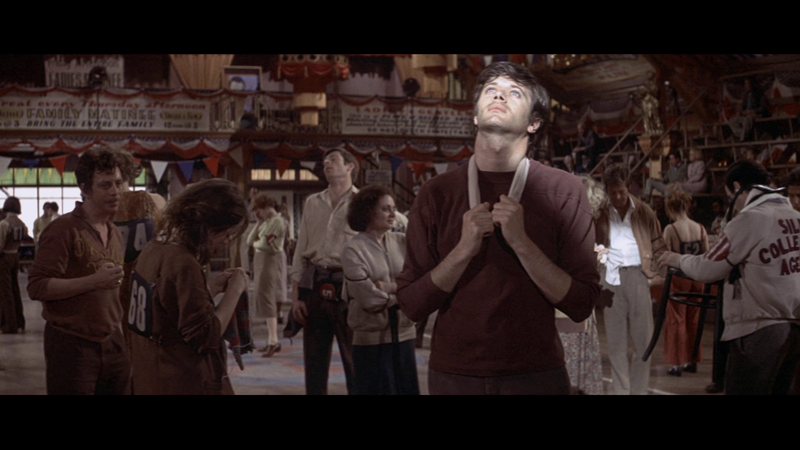 The Bottom Line
They Shoot Horses, Don't They? is the work of a true artist, as Pollack brings together the elements he's working masterfully with to create a touching, disturbing picture of the heights of desperation and America's oft-craven thirst for bloodsport. The gritty, upsetting mood he establishes ensures that it's not going to be a film you can watch any time, but it's a tremendous experience nonetheless. Kino has brought it back with an excellent presentation, and reached back to resurrect some great extras, making it well worth checking out, whether you're a fan or a newcomer.