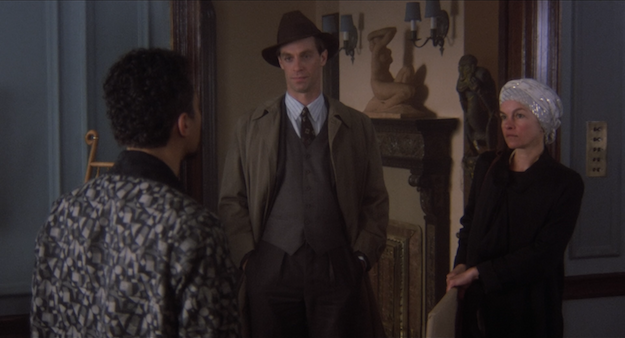 They say within every cynic is a bruised romantic, and so it is with Alan Rudolph's 1988 cynical-romantic gloss on the waning Paris art scene of the 1920s, The Moderns. Like much of Rudolph's work from around this time, The Moderns is a tricky mix of stylized swooning and sneering that requires openness (and patience) on the part of the viewer, to satisfactorily decode what the director is trying to express.

Keith Carradine stars as Nick Hart, an American expat painter who rubs shoulders with luminaries like Ernest Hemingway and Gertrude Stein, but can't seem to get any of their fame or acclaim to rub off on him. Gallery owner Libby Valentin (Genevieve Bujold) is indulgent, but she hasn't sold a "Hart" in years. When society dame Nathalie de Ville (Geraldine Chaplin) makes an under-the-table request to have forgeries made of some paintings belonging to Nathalie's soon-to-be ex-husband, Libby earmarks Nick for the job. Nick is meanwhile being pestered by a society columnist pal nicknamed "Oiseau" (Wallace Shawn) to flee Paris with him and head to a better life in Hollywood.

With Paris overrun by American poseur tourists, there seems to be nothing keeping Nick in the City of (dimming) Light. That is, until he runs across an old flame from the states. Linda Fiorentino is Nick's ex, Rachel, an inscrutable little number now married to Bertram Stone (John Lone), a shady businessman who hopes to buy himself into culture.

In the newly recorded interviews included on Shout! Factory's "Shout Select" Blu-ray of The Moderns, Alan Rudolph says that the script for this film kicked around for decades, waiting to get made. Journalist Jon Bradshaw hopped on board in the '80s, hoping to give Rudolph's discursive musings on 1926 Paris some focus and structure. When Bradshaw died relatively young in 1986, the filmmakers felt compelled to complete the project for Bradshaw's sake. It's a touching story, but not one that is clearly reflected in the finished product. I quite enjoyed the film, but even I must admit that its story is thin and its atmosphere puzzling. 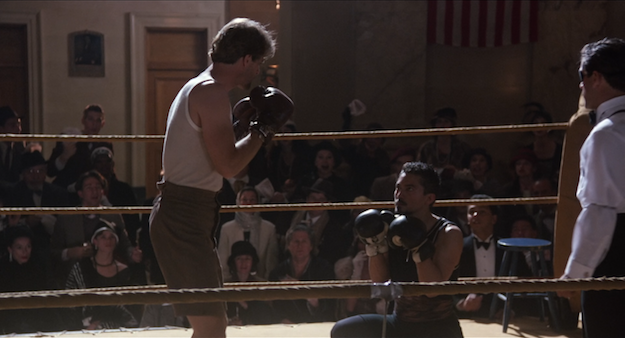 It would be one thing if Rudolph evoked 1926 Paris with some level of verisimilitude, but he seems more interested in evoking himself. This version of 1926 Paris is pretty much the same as the 1976 Los Angeles of Rudolph's Welcome to L.A.. And, sure, that's probably the point. We might expect, then, that Rudolph would delve deeply into his characters, but his penchant for dreamy opaqueness keeps us outside. We're left wondering for long stretches of the film why exactly Rachel is so special that Nick risks beatings from her husband's thugs -- and even goes head to head with Stone in a boxing ring -- over her. And Rudolph lets us wonder.

This confusion is no fault of the cast, who fit into their roles, and into the larger canvas, with verve and aplomb.

There are numerous stand-alone moments in The Moderns that are entertaining and striking on their own. Kevin J. O'Connor plays the young Ernest Hemingway, who can often be seen in the corner of scenes, composing snatches of future books and saying things like, "Two things can kill a man: suicide and gonorrhea." When he opines that Paris is a "portable banquet," Wallace Shawn's Oiseau suggests he should work on his phraseology.

It will take a while to forget the moment where John Lone shaves Linda Fiorentino's armpit with a straight razor, as she lounges in the tub, eating strawberries. It's just so decadent and bizarre an image that you would never be able to see it in a hundred other movies -- nor would you expect to.

For better and worse, that's the value of something like The Moderns. It behaves like no other movie, and it comes by its oddness honestly. Whether or not you engage with its love story, or with its ruminations upon the value of art in a world driven by commerce, the film gives off an energy that will mesmerize you. 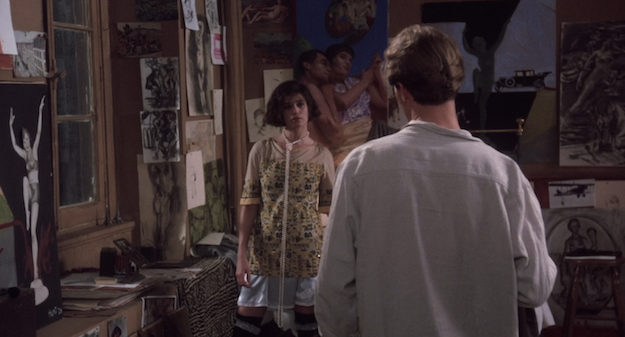 The Video:
Cinematographer Toyomichi Kurita's work on The Moderns is gauzy and smoky, which means that the image is typically soft on purpose. As such, the AVC-encoded 1080p 1.85:1 presentation rarely looks particularly crisp, even when it reproduces depth and contrast effectively. Often, the vintage B&W stock footage that director Rudolph uses to punctuate the film boasts more intense fine detail than most of the dramatic scenes. There is sporadic dirt and debris, too, but the colors are strong and saturated. Considering the style of the film, the look is quite satisfying.

The Audio:
The disc offers both DTS-HD MA 5.1 surround and DTS-HD MA 2.0 stereo mixes. The surround mix is not drastically different than the stereo mix, in terms of dialogue and effects, but the boosted ambience of the rear channels serves to make the experience a touch more immersive. Mark Isham's moody musical score also benefits from the opportunity to spread across the soundstage. There are two optional subtitle tracks: a partial English track, which is the default and which translates certain essential passages spoken in French, and an English SDH track.

(HD, 1:36:35) - A feature-length look back at the making of The Moderns, featuring interviews with director Alan Rudolph, producer Carolyn Pfeiffer, and star Keith Carradine. They cover the story's long two-decade journey to the screen, discuss the ingenuity that came out of working with a tight budget, and offer the usual praise for the cast and main crew members involved. The piece gets a little rambly and redundant as it nears the end, but it wraps up with Rudolph talking a little about his first film in 15 years, Ray Meets Helen.


Final Thoughts:
The Moderns is a film that may require multiple viewings to fully unlock its pleasures. Some are apparent immediately: the film is beautifully photographed and designed. It features excellent performances and an evocative musical score. But director Alan Rudolph's studied approach can be mistaken for detachment, at first blush. Only once you've soaked in this film -- and gotten good and waterlogged -- do you see the bruised romantic heart beating inside the clever, cynical shell. If you get in the tub, I'll shave your armpits. Recommended. 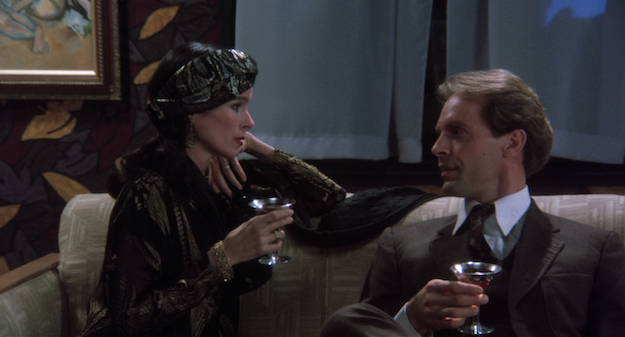