Arrow Video // Unrated // October 3, 2017
List Price: $39.95 [Buy now and save at Amazon]
Review by Stuart Galbraith IV | posted October 10, 2017 | E-mail the Author
Unlike its companion release, The Suspicious Death of a Minor, Lucio Fulci's Don't Torture a Duckling (Non si sevizia un paperino, "Don't Torture Donald Duck," 1972) is a full-on, full-fledged Italian giallo, the singularly Italian crime- and sometimes horror-thriller. All the classical elements are there: a strange and mysterious title, here as many others including an animal that figures cryptically into the plot; odd, seemingly disconnected scenes and characters where the audience typically can't tell what precisely is happening, but which make sense when all is revealed at the end; eccentric red herrings; Catholicism and a preoccupation with sex and death. This coming from director Fulci, the movie is also more graphically violent than most early gialli, and there's an uncomfortable element of sadism and, arguably, misogyny. If it weren't so stylized and, compared to today, obviously artificial, its plot revolving around the serial murders of young boys would be hard to take.

That and other controversial themes limited the film's distribution in Europe, and it wasn't shown at all in the United States until 1999, when Anchor Bay released it to DVD. Fulci made some genuinely good genre films during the 1970s and early-'80, notably this, A Lizard in a Woman's Skin (1971), and the late-stage Spaghetti Western Four of the Apocalypse (1975), but then turned to hard-core gore and splatter films, pictures like Zombie Flesh Eaters (1979), The House by the Cemetery (1981), and The New York Ripper (1982), movies for which he is best known. Health problems and the suicide of his terminally ill wife in 1969 may have contributed to the director's on-set ruthlessness, misogyny, and occasional sadism described by some of the casts and crews that worked with him. It's hard to believe Fulci got his start directing frivolous movies starring the comedy team of Franco Franchi and Ciccio Ingrassia, the Leo Gorcey and Huntz Hall of Italian slapstick. 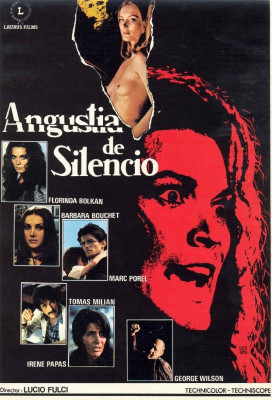 As children's bodies begin to stack up in the local morgue, the media descend upon the small village, including journalist Andrea Martelli (Tomas Millan). An expensive cigarette lighter at one crime scene leads him to suspect wealthy and glamorous Patrizia (gorgeous German-American Barbara Bouchet), lying low at her father's estate following a drug scandal. The police, meanwhile, set their sights on La Magiara (Florinda Bolkan), a gypsy who, in the opening scenes, is seen digging up the skeleton of an infant near that modern freeway, using her bare and bloodied hands, later creating wax figures of the boys which she sticks with pins.

(Mild Spoliers) The movie grapples with too many human failings to count: murder, vigilantism, betrayal of the Catholic Church, prostitution, drug use, pedophilia, discrimination against gypsies, exhibitionism, voyeurism, superstition, blackmail, mental illness. At various times the movie resembles exploitation versions of Ace in the Hole and The Ox-Bow Incident. Others have called it a giallo Harper Valley P.T.A..

The film is at once unseemly yet intelligent and ambitious. The visually striking freeway, for instance, comes to symbolize a kind of progress where modern, middle-class Italians can whiz past insignificant, Old World-style villages like Accendura, oblivious to its remote-seeming but fundamentally Italian concerns. High society Patrizia lounges, sometimes tantalizingly nude, in a modern house similar to the settings of most gialli, but the rest of the town has that early postwar Neorealist ambiance

That same look was later nostalgically recreated in Cinema Paradiso, but here those same loveable characters become predators, Peeping Toms, bloodthirsty vigilantes, and lunatic priests. It's not a flattering portrait, with Bouchet and Millian especially treated far more identifiably sympathetically than any of the locals. Even the police, not often treated favorably in ‘70s Italian films, come off better than the villagers, who for much of the film are little better than a sweat-soaked mob.

The movie's gore effects are crudely realized but elaborately conceived. One protracted, vicious beating is particularly hard to watch, even though the makeup appliances and fire engine red "blood" is clearly unreal by today's clinical standards.

A three-page booklet essay details the movie's arduous 2K restoration, sourcing a badly damaged original Techniscope camera negative and a 4-perf duplicate negative. Arrow Video clearly put in a lot of man-hours restoring and fixing innumerable issues, and the results are very impressive. The lossless English and Italian language versions (with optional English subtitles) were sourced from optical soundtrack negatives. The Blu-ray is Region A encoded, while an accompanying DVD version is Region 1 with Dolby Digital mono audio.

Arrow Video's glut of supplements here is about equal to three Criterions. They include a new audio commentary by genre scholar Troy Howarth; a new video essay featuring another, Mikel J. Koven, who really gets into the nuts and bolts of giallo filmmaking and exhibition; a new video essay by Kat Ellinger, which looks at the misogyny in Fulci's films; "Lucio Fulci Remembers," an audio interview with the director from 1988; new video interviews with actor Florinda Bolkan, cinematographer Sergio D'Offizi, assistant editor Bruno Micheli, and assistant makeup artist Maurizio Trani (on the Blu-ray only). The sleeve is also reversible, with original Italian art on one side, newly commissioned artwork by Timothy Pittides on the other.

A genre landmark lovingly restored and buttressed with scads of supplementary features, Don't Torture a Duckling is a DVD Talk Collector Series title.