Shout Factory // Unrated // October 17, 2017
List Price: $139.99 [Buy now and save at Amazon]
Review by Stuart Galbraith IV | posted October 19, 2017 | E-mail the Author
The Dick Van Dyke Show is the best American sitcom of the 1960s, but Green Acres is by all odds the funniest. Somewhat unfortunately lumped in with CBS's other, lesser rural comedies of the time, notably The Beverly Hillbillies and Petticoat Junction, from which it was spun off, Green Acres is most definitely not the show it initially appears to be.

The basic premise, wealthy New Yorkers move to a ramshackle farmhouse, was the inverse of Beverly Hillbillies, a one-joke sitcom run into the ground by the end of its first season, while also springing from the same basic concept that began with The Egg and I (1947), with Fred MacMurray and Claudette Colbert playing essentially the same roles later essayed by Eddie Albert and Eva Gabor on Green Acres. That movie also introduced Ma & Pa Kettle and their brood, an uncultured backwoods family that, beginning in the first sequel, move into a big, modern house in the city, much like the Clampetts do on Hillbillies.

But the comedy of Green Acres is a different animal entirely. Rather than merely poke fun at the cultural clashing of urbanites and country folk, Green Acres is an absurdist exercise in continual, nonsensical frustration, humorless Oliver Douglas vs. Hooterville, he trapped in a strange world of oddball characters operating under their own other-dimensional logic. It doesn't much resemble The Egg and I beyond springing from the same basic premise, but if Franz Kafka had ever written an American sitcom, the result might have looked a lot like Green Acres. 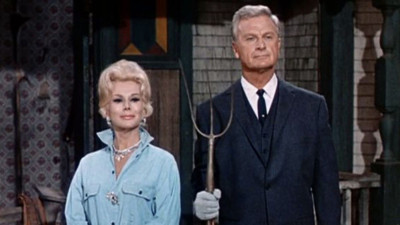 The show's premise is simple enough and, possibly unique in TV Land, was carefully stretched over much of its first season and its characters introduced over two separate shows. Longing to live on a farm and work the land, Oliver buys a small farm and with glamorous Hungarian wife Lisa (Eva Gabor), they abandon their luxurious Park Avenue penthouse for rustic life in Hooterville. They buy a dilapidated shack from unrepentant shyster Mr. Haney (Pat Buttram), a home literally falling apart and without electricity, a telephone, or running water. Lisa is appalled and tries to convince Oliver to move back to the city, but he is undeterred.

The Douglas's story originally unfolded on both this show and the far more conventional but popular and, initially, very entertaining Petticoat Junction, then in its third season. Albert and Gabor made appearances on that show, while its stars appeared on theirs. This cleverly assured Green Acres' success, giving its characters exposure not once but twice for seven of its first ten weeks on the air. (Interestingly, these early shows are also generally done in "real time," with stories set about week apart, a device common today but rare in 1965.) The Petticoat Junction shows aren't included, but don't impact Green Acres' main story threads, though there are references to plot elements from the other show.

Most of these early episodes, unlike the rest of the series, are built upon Oliver's unshakable optimism, with Lisa begging him to move back to New York, and Hooterville's characters bemused by Oliver's intentions and lionization of the American farmer. However, soon enough writers Jay Sommers (who co-created and produced the show) and Dick Chevillat realized the show's full potential by making Oliver essentially the straight man not only to ditzy Lisa's malapropisms but also to Hooterville's consistently peculiar residents. The show's Mr. Haney proved the perfect showcase for Buttram, whose genially wheezy Alabama accent and wall-eyed sincerity made him the perfect shyster against Albert's reluctant, short-fused customer. (Executive producer Paul Henning must have been a big Gene Autry fan. Buttram was Autry's sidekick on TV while the famous cowboy's first sidekick, Smiley Burnette, spent his last days as a regular on Petticoat Junction.)

Equally amusing is Eb (Tom Lester), the Douglas's unshakably cheerful hired hand with an ever-present chipmunk smile. His wide-eyed innocence may or may not be a put on; his "golly, gee!" dialogue suggests a bumpkin Jimmy Olson, but there is a very strong suggestion that perhaps he's not nearly as dense as he might first appear. As with all of Hooterville's crazy residents, there is certainly the suggestion that Eb takes an almost sadistic pleasure in watching Oliver become increasingly flustered and frustrated, that they're the ones playing Oliver for a fool.

Eva Gabor, quite unlike her famous-because-she's-famous sister Zsa Zsa, had real talent as a comedienne, and is quite adorable and sexy. But it's Eddie Albert, with Sommers and Chevillat's sharp wit, which really makes the show as funny as it is. Like Jack Benny, he gives even the show's most minor supporting characters plenty of room to be funny, realizing that it's his exasperated reactions that make their goofy characters pay off. They include double-talking county agent Hank Kimball (Alvy Moore), and Fred and Doris Ziffel (Hank Peterson and Barbara Pepper), neighbors who live with their TV-addicted "son," a pig named Arnold (Arnold). Frank Cady, the busiest "crossover" actor in the history of television, joins the fun as Sam Drucker, owner of the general store and the closet thing Hooterville has to a rational human being. Finally, there's the Monroe Brothers, carpenter Alf (Sid Melton) and his "brother," Ralph (Mary Grace Canfield), contractors from Hell.

After dismissing CBS's rural comedies for years, I became an instant fan of Green Acres after stumbling upon a fifth season episode called "The Beeping Rock," which exemplifies the show's wonderful madness. In that episode, nine-year-old local Dinky Watson (Johnny Whitaker) claims to have recently returned from a trip to the moon in a rocketship he designed and piloted himself. All of Hooterville save Oliver matter-of-factly accepts Dinky's claims, with Lisa spending $14 on a moon rock Dinky has brought back with him. Oliver is outraged at everyone's supposed gullibility, especially after Mr. Haney later tries to sell her "gen-u-wine" Mars rocks and moon dust dug up from the "Sea of Tranquilility" (sic). Later, however, the Douglases discover that Lisa's moon rock beeps in the moonlight, and seems to converse with Arnold the Pig. When Oliver takes the rock to the local doctor (Frank Ferguson) to be X-rayed, and later to a NASA official (Jerome Cowan), they think he's nuts. He ships the rock to NASA where it's locked away in a secret vault where all the moon rocks are stored -- and which all beep under artificial moonlight.

Another favorite is "One of Our Assemblymen is Missing," a brilliant second season show that has Oliver fighting a "State Farm Unattached Duty Tax" with no apparent purpose, especially after learning that Hooterville has been without government representation since an ill-fated election day.


Though obviously inspired from The Egg and I, Green Acres was more or less also a remake of Granby's Green Acres, a short-lived radio series starring Gale Gordon and Bea Benaderet, which Jay Sommers had created. This radio genesis explains a lot. Though a Top 20 ratings hit for all but its fifth season (peaking at #6 during season two), Green Acres looks cheap. The lighting is often harsh and soundstage exteriors pretty laughable even by 1960s TV standards. Conversely, so good is the writing of Sommers and Chevillat that even with eyes closed the show is just as funny, and plays just like a classic radio comedy.

Like many an orphaned TV show, MGM stopped releasing DVDs of Green Acres with the release of the third season. In 2005. A dozen years ago. Happily, Shout! Factory has picked up the mantle and Green Acres: The Complete Series includes previously unreleased seasons four-through-six, all 170 episodes. It's not known whether the show has been remastered; the earlier MGM DVDs looked rather dirty and grainy, and these seem to look better, especially those from the last three years of the program. Each season gets it own DVD case and the single-sided discs are closed-captioned decent Dolby Digital mono. Region 1 encoded.

Some terrific supplements accompany the Season Six set. They include "Green Acres Is the Place to Be," a 30-minute primer featuring TV historian Stephen Cox. Bolstered by some great behind-the-scenes stills, Cox offers just the right mix of informed enthusiasm, historical background, and concise anecdotes about the series. So much so, in fact, that his informed and entertaining discussion prompted this writer to buy Cox's book on the subject, The Hooterville Handbook.

Also included is a long (also about 30 minutes) excerpt from a 1966 episode of The Merv Griffith Show featuring Gabor and Albert as guests. It's a pretty chaotic mess of a chat, but when Albert, a genuinely great and colorful man much more than a Hollywood actor, comes on the show gets more interesting.

Let's face it: We could all use a good laugh these days, and Green Acres: The Complete Series provides just that, in spades. A DVD Talk Collector Series title.

This has been a Filmways Presentation, dahling.