Code Red // Unrated // January 2, 2018
List Price: $34.95 [Buy now and save at Amazon]
Review by Stuart Galbraith IV | posted January 16, 2018 | E-mail the Author
Neither especially noteworthy nor particularly stylish, Seven Blood-Stained Orchids (1971) is nonetheless a diverting example of the singularly Italian thriller known as giallo. The term taken from the postwar paperback pulp mysteries identifiable by their yellow covers, giallo as a movie genre dates back to Mario Bava's delightful The Girl Who Knew Too Much (1963) and crystalized with his even better Blood and Black Lace the following year. Giallo really took off, however, after the success of Dario Argento's The Bird with the Crystal Plumage (1970). Dozens followed until the tail end of the ‘70s, with such noteworthy titles (all available on DVD and/or Blu-ray) as Bava's Hatchet for the Honeymoon (1970) and A Bay of Blood (1972); Argento's The Cat o' Nine Tails (1971), Deep Red (1975), and Suspiria (1977); Gieliano Carnimeo's The Case of the Bloody Iris (1972); Lucio Fulci's Don't Torture a Duckling (1972); Aldo Lado's Who Saw Her Die? (1972) and The Short Night of the Glass Dolls (1972); Massimo Dallamano's What Have You Done to Solange? (1972); Sergio Martino's All the Colors of the Dark (1972); Antonio Bado's The Bloodstained Shadow (1978), and many others. Many of the best giallo boast gorgeous stylized cinematography and lighting, and many are complex puzzles as much as mystery-thrillers, in which the audience often isn't sure what's happening until the climax. In some respects these movies, virtually unknown or widely dismissed in the U.S. until the 1990s, bridge the gap between Hitchcock's classic thrillers and latter-day slasher and police procedural films.

Seven Blood-Stained Orchids rates somewhere in the middle of this pack. Director and co-writer Umberto Lenzi, who died in October 2017 shortly after filming a new interview for this release, was a journeyman filmmaker, plying his artisanship in whatever genre happened to be popular at the time. He began with costume adventures, switching to spy movies and spaghetti Westerns when they became popular, then giallo and police procedurals after that and finally ending the most productive part of his career with extremely graphic horror films, the most notorious being Cannibal Ferox (1981). Compared to that film, the murders in Seven Blood-Stained Orchids are comically tame, and it lacks the stylishness of Bava or Argento's giallo, but the story is relatively strong and compelling. (Oddly, Lenzi thought just the reverse, that the story was pedantic but that it was visually stylish.) 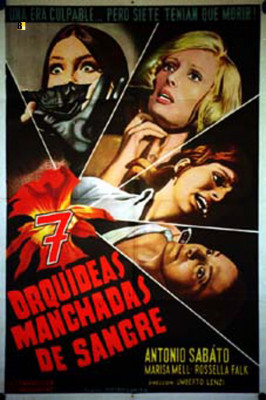 A serial killer targeting women with seemingly no connection to one another (a prostitute, a mental patient, an artist, etc.) is terrorizing the city, the half-moon medallion he leaves at the scene earning him the nickname "the Half-Moon Killer." One of the victims is former hotel proprietress Giulia (Uschi Glas), attacked aboard a moving train at the start of her honeymoon with fashion designer Mario (Antonio Sabàto).

Though the press duly reports her murder, in fact Giulia survived and secretly recovers in hospital, a ploy by police Inspector Vismara (Pier Paolo Capponi) serving no clear purpose. In any case, Mario and Giulia set out to identify the killer after realizing all were guests or employed at her hotel at the end of the high season three years before.

Clues suggest a mysterious American who regularly dined but did not stay there, and that the murders are somehow connected to a fatal automobile accident in which the panicked driver, a woman, fled the scene and allowed the man in the car to bleed to death.

An Italian-West German co-production, Seven Blood-Stained Orchids combines classical giallo elements with those of Germany's earlier, more innocent krimi mysteries, hence German starlet and genre veteran Glas's appearance, Italian police procedural films, as well as the emerging slasher genre. Well-paced, the picture intercuts Giulia and Mario's movements with those of the killer, shot from his point-of-view, stalking his half-naked victims and using increasingly grisly methods to murder them. (This climaxes with what may have been the first "driller-killer" murder.)

Glas is a perkily charming screen presence though Antonio Sabàto (Grand Prix) is blandly handsome and unaccountably testy; to this reviewer he always resembled a Supermarionation puppet from Thunderbirds and his acting range was similar. The supporting cast is excellent however, giving Rossella Falk (8 1/2) a nice vignette as a desperate hospital patient; Marisa Mell (Danger: Diabolik) shines in a dual role; and busty Gabriella Giorgelli makes a strong impression as a prostitute, an early victim.

Filmed in 2-perf Techniscope, Code Red's new Blu-ray utilizes a new HD scan with some color correction. The image, particularly the color, looks great. Included are both the English-dubbed and original Italian soundtracks with optional English subtitles. Region "A" encoded.

Supplements include an extensive interview with director Lenzi, filmed shortly before his death, as well as repurposed interviews with Lenzi, and actress Giorgelli, from an earlier DVD release. There's also an audio commentary track by film historian Troy Howarth, as well as a trailer.