The 1960s were a turbulent decade for 20th Century Fox, consisting of some notable hits (like The Sound of Music) and misses (like the mega-expensive Cleopatra). 1967's Doctor Dolittle is one of their most notable misses, as being a family-oriented musical they had hoped it would repeat the success of 1965's The Sound of Music. Soundtrack albums were in stores months before the movie was released, and many merchandise tie-ins filled stores as well- but the movie itself was still poorly received and raked in several million dollars under its cost at the box office. Its only successes after that were "event" weekend showings on independent TV stations, and was among the first batch of Fox movies released on videocassette in 1977 by Andre Blay's Magnetic Video company, which had licensed a number of films from the studio at a time when the industry wasn't sure if there would be much of a market for movies on videotape at all. 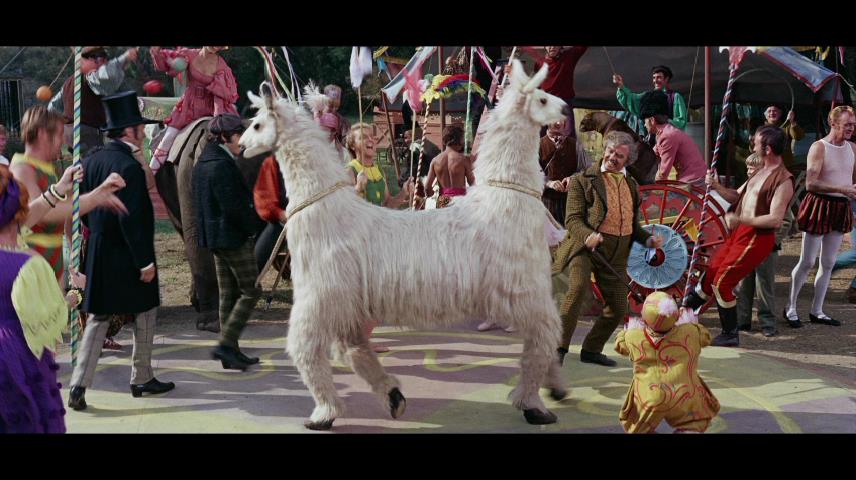 Doctor Dolittle, based on the children's stories by Hugh Lofting, seemed like it at least stood a chance at being successful. Rex Harrison, star of 1964's Oscar winner My Fair Lady, was cast in the title role, where again he ends up half-singing and half-shouting the lyrics. Dr. John Dolittle of course had a talent for talking to animals, which enabled him to become "the greatest animal doctor in the world" in 1845 England after being a bit less successful as a doctor for humans. He found he enjoyed the company of animals more than that of most humans as well (something I can certainly identify with!) and has taken to living in a house filled with them- not just the usual dogs and cats but also rabbits, pigs, cows, you name it. The script interwove a number of Lofting's books, with the main plot point being Dolittle's search for the Great Pink Sea Snail, a creature he'd read about in books but whose existence was in doubt. His best friend is Matthew Mugg, played by Anthony Newley here, who at least in the movie doesn't seem to do a whole lot but follow Dolittle around and give him at least one human to talk to. Mugg is in turn followed by the younger Tommy Stubbins (William Dix), who only seems there to show gee-whiz reactions to Dolittle's wonders and give the kids in the audience someone to relate to.

Notable ‘episodes' included here include Dolittle taking in the fantastical "pushmi-pullyu", a two-headed llama (obviously accomplished on film as simply putting two performers in a costume, but still more convincing than most CG effects of today) and making money putting him in the local circus run by Albert Blossom (Richard Attenborough), who provides one of the more memorable musical numbers "I've Never Seen Anything Like It" (which led to Fox's advertising tagline for the movie being "You've never seen anything like it!") There's also a flashback to how Dolittle acquired his unique talent, and then gets into some legal trouble before heading out to sea in his quest for the Great Pink Sea Snail. All of this leads to a somewhat overlong running time of two and a half hours, although the theatrical release included an intermission prior to the final hour. The Blu-Ray disc presentation retains the overture, intermission and exit music.

Of course in any musical, characters are always in search for excuses to break out into song. That's both a good and bad thing here. The songs (as well as the screenplay) were written by Leslie Bricusse, probably best known for the songs in 1971's Willy Wonka and the Chocolate Factory. While there are a number of great lively numbers, such as the previously mentioned one with Attenborough, Newley's introductory "My Friend the Doctor" and the iconic "Talk to the Animals" performed by Rex Harrison himself, some of the others simply drag out the running time. With studios often afraid to release long movies these days, I could imagine the song "When I Look in Your Eyes," a love song that Dolittle sings to a seal before setting free into the ocean, easily getting the axe and likely not missed by many if it had been. (It's the sort of number where restless kids in the audience were likely asking their parents how much longer it would be until the movie ended.) Still, at least looking at it fifty years later, the movie's positives outweigh its negatives. There were a great deal of problems during this movie's production, but to everyone's credit that isn't apparent in the finished product. 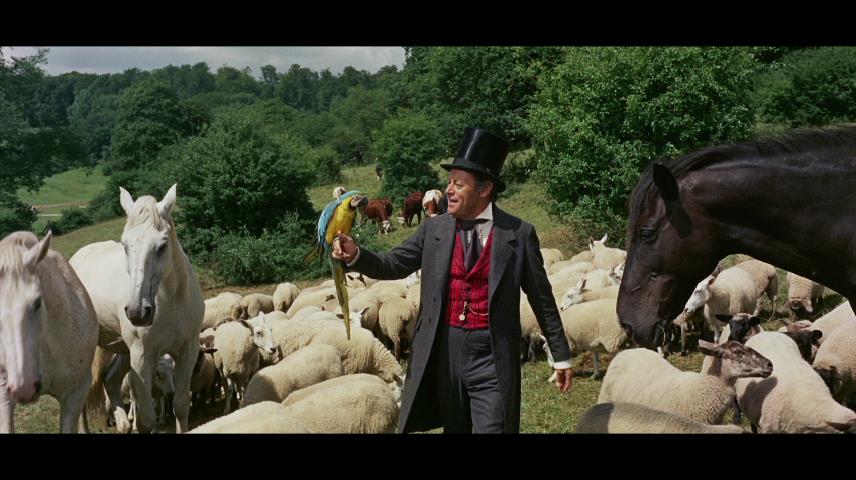 For Dr. Dolittle's 50th anniversary, 20th Century Fox produced a new 4K transfer from the 70mm Todd-AO negatives, but oddly handed it over to Twilight Time for their usual mail-order-only release limited to 3000 copies. (Besides having been one of the very first movies released on VHS and Beta, Fox's DVD issued in the year 2000 is often found in bargain sections.) The aspect ratio is about 2.2:1, a bit narrower than the usual anamorphic "scope" film but giving plenty of room to spread out scenery and characters (I remember older 4x3 panned and scanned transfers looking rather cramped.) While I'm often able to spot at least a few flaws in even the best transfers, I'll confess to being unable to in this case and am for the first time giving a perfect score for the picture quality. It looks simply pristine, with everything in perfect focus with incredible detail, yet still looking as intended without any obvious digital tinkering. (The clarity did bring out one noticeable flaw in the production, a moment when a string is tied to a parrot's leg and then pulled to make him react at the right moment. This was before the "No animals were harmed in the making of this film" notice became obligatory.) Being a 4K transfer I can only imagine how it would look on the 4K disc format (which at this time still lacks a good number of classic titles or even many shot on actual film rather than digital), but on 2K Blu-Ray it looks just about perfect. 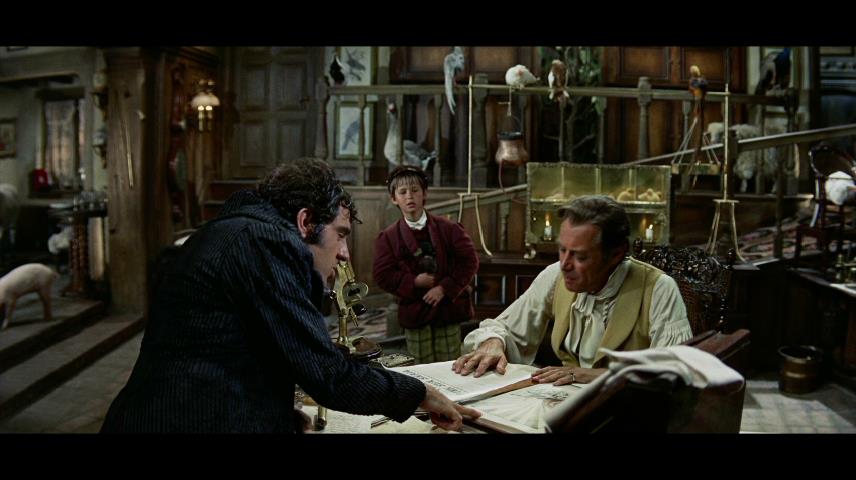 Once again the 4-channel magnetic soundtrack is attempted to be passed off as a 5.1 track on this disc, but with my receiver always having EX decoding enabled all of the sound wound up in the rear speakers and not moving to the sides. (The DVD was apparently encoded in true 4-channel Dolby Digital, which has been standard practice for Fox when appropriate.) Both spoken dialogue and singing is expertly panned across the front channels, relating to the actor's position onscreen. The surrounds don't actually call much attention to themselves, aside from some slight echoing in the music and a rainstorm in one instance. Overall quality is very clean, with no noticeable hiss. The disc includes an alternate 2-channel mix (likely done for prior laserdisc and VHS releases) as well as hearing-impaired subtitles. 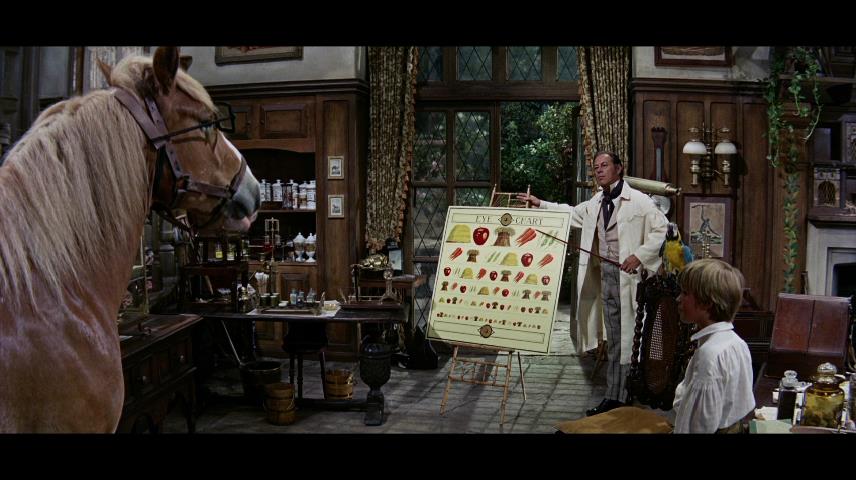 An audio commentary track with screenwriter/songwriter Leslie Bricusse and Twilight Time's Mike Matessino accompanies the movie and is a great listen, giving insight into Bricusse's general way of thinking and about stage and screen musicals of the past few decades. They don't focus entirely on Dr. Dolittle itself though, often not even commenting on a number of scenes opting instead to talk about other productions. Twilight Time's standard isolated music track includes all of the songs without vocals, and some in-studio conversation before and after a couple passages. A 45-minute TV special made in 1998 (in 4x3 standard-def) titled "Rex Harrison: The Man Who Would Be King" is also included, which is a good concise biography of Harrison but only spends about a minute on Dr. Dolittle, basically saying that it was a good movie but didn't make a lot of money. Finally there's a theatrical trailer in fair condition and transferred in standard-def, 4x3 letterbox format- this gives away a big payoff at the end of the movie but also has Harrison amusingly addressing the audience directly. Twilight Time's usual "catalog" of titles, indicating those that were sold out at the time of this disc's release, is also present. The insert includes an essay by Julie Kirgo which describes the movie climate of the time that may have led to this film's failure upon release, as well as some of the problems during its production which again aren't obvious onscreen. 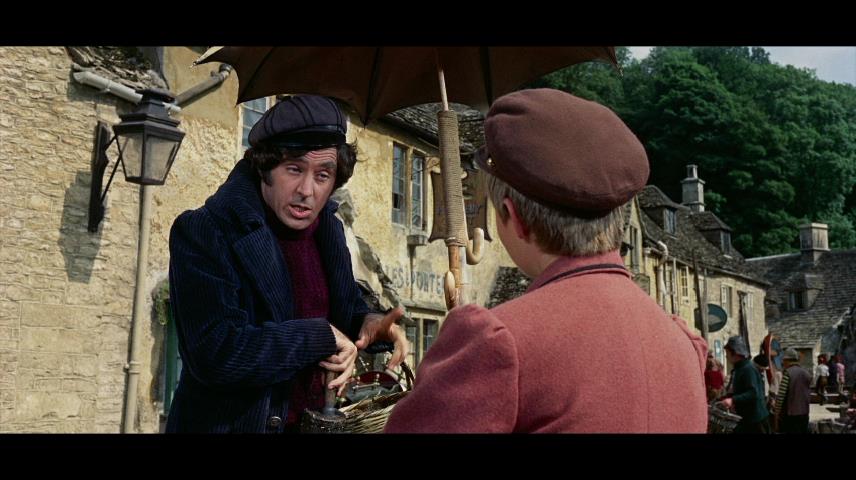 Dr. Dolittle is quite a bloated production and runs a bit too long, but it's still hard to dislike it completely. Rex Harrison hams it up (it's been said that he was somewhat difficult to work with on this film) and Anthony Newley's songs are uplifting even if some of the others' numbers slow things down. In any case, it's still several times the movie that the forgettable 1998 Eddie Murphy version was. The quality of Twilight Time's release make it a must-have for any fans, as this is simply the best it has ever looked and sounded.