The basis for its musical-comedy-romantic plot began when writer Norman Krasna was amused watching actor and non-dancer Burt Lancaster perform a dance at a Writers Guild Award ceremony. (Years later, Lancaster sang and danced "Thank You Very Much" from the musical Scrooge at the Oscars, and that was quite hilarious.) From that Krasna built a story around a billionaire who, after initially concerned about a theater company satirizing his playboy ways, pays the company a visit only to be mistaken for a lookalike actor auditioning to portray him. As he's instantly enamored of the leading lady (Monroe), he allows himself to be cast in the part. The problem is Clement has absolutely no talent as an actor, a singer, or a dancer, hence the joke.

Initially, Gregory Peck agreed to star, but once Monroe was cast, the last film in her long-term contract with 20th Century-Fox, she had playwright-husband Arthur Miller expand her role. Peck objected to the shift in the story's emphasis and dropped out. To replace him, Rock Hudson, Cary Grant, and Charlton Heston all were approached and all turned it down, but then Miller and Monroe saw Yves Montand as John Proctor in the 1957 film version of Miller's play The Crucible and lobbied for him, even though Montand's English was extremely limited at that point.

Two labor strikes, more work on the script by Hal Kanter, and Monroe's usual personal issues during shooting notwithstanding, the resultant film came out okay. It has many plusses and a few minuses, and Montand's performance both helps and hurts the film; Gregory Peck would have been a far better choice.

But the picture deviates a lot from the standard 1950s Monroe vehicle, and the script and George Cukor's direction give it a subtlety and sophistication unusual for musicals of the period. The recently released-on-Blu-ray Les Girls (1957) strains for something similar but fails badly. Let's Make Love, by comparison, succeeds almost effortlessly, if in small ways. 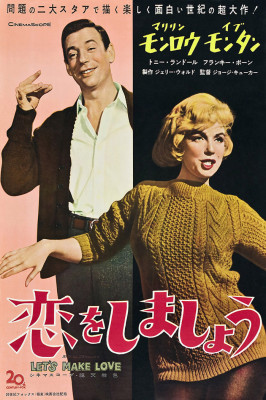 After being cast, using the name "Alex Dumas," Clement enjoys a casual friendship with Amanda, who's not romantically interested in Clement at first, but anxious to help the obviously neophyte actor along during rehearsals. (Character actor Michael Fox also auditions to play Clement, while Dick Dale impersonates Elvis while others spoof other celebrities of the day, including Maria Callas.) Clement, however, has zero talent. He attempts to tell a joke that wowed his yes men back at the office, but it falls like an anvil among the seasoned actors and dancers.

Lacking talent and forced to compete with Tony for Amanda's affection, Welch hires the world's greatest comedian, singer, and dancer to show Clement the ropes of their respective professions: Milton Berle, Bing Crosby, and Gene Kelly. (Funny as this is, it undermines the story of a billionaire wanting someone to love him for himself, not for his money and power.)

Berle's is the longest of the unbilled cameos. (He bought trade ads encouraging Academy members award him an Oscar nomination for playing himself, raising eyebrows.) It's the funniest sequence because Montand is convincingly stiff as a comedian, especially the kind of broad slapstick that was Berle's specialty. But as a singer and a dancer, Montand is simply too obviously talented to exhibit a convincing all-thumbs clumsiness. (Bing, however, is excellent in his brief scene, seemingly ad-libbing a lot of the dialogue as they sing together.)

Gregory Peck, more comically gifted than many remember, would have been more amusingly awkward, and his reactions to the whirlwind of show business around him probably would have been priceless. Montand, though is enjoyable to watch, and for 1960 American audiences a fresh face, is on the other hand a wild card that would have left audiences uncertain about how everything would turn out.

The movie is surprising in myriad small ways. Tony Randall, for instance, specialized in playing slightly manic, excitable types, but here his performance is unexpectedly subtle, and his private moments with Clement play especially well. Former third Stooge Joe Besser, as a joke writer, had a screen persona even more excitable (to say the least), yet he's more "normal" than Randall usually was. It's an interesting bit of casting that pays off.

The satirical play being staged is set in a theater-in-the-round, allowing for a different kind of staging and choreography from the usual proscenium arch/let's-put-on-a-show-type musical studios like MGM and Fox usually made. The intimacy of the theater setting, the abstract sets, and more casual atmosphere lend it a different look that's refreshing.

Monroe, heavier here than any film before or after, is nevertheless very sexy, and far more natural and less affected than in her earlier Fox films. Apparently she wasn't all that happy with the script that was finally settled upon, but her performance is sweet and charming, even if after all the fuss Clement is still the main character and dominates the screentime, despite her top billing.

Twilight Time's Blu-ray, licensed from Fox, presents the film in its original 2.35:1 CinemaScope aspect ratio, with 5.1 and 2.0 DTS-HD Master Audio mixes approximating the original 4-track magnetic stereo release prints. The image looks pretty good throughout, though some color tweaking seems to have been done, most obvious on the flesh tones of Monroe and others. A limited edition of 3,000 units, this offers optional English subtitles and apparently is region-free.

The limited supplements include a trailer and isolated music track, along with Julie Kirgo's usual booklet essay.