Shout Factory // Unrated // August 14, 2018
List Price: $59.97 [Buy now and save at Amazon]
Review by Stuart Galbraith IV | posted August 6, 2018 | E-mail the Author
The name Sid Caesar didn't carry a lot of weight for my generation, growing up in the 1970s. Caesar turned up frequently as a guest star on lesser variety shows like Tony Orlando and Dawn and the infamous Pink Lady (and Jeff), doing what at the time seemed like awfully anachronistic, out-of-step-with-the-times sketch comedy. He'd turn up in movies likeAirport 1975, Grease and the telefilm The Munsters' Revenge, doing comedy relief that wasn't very relieving. (He's almost creepy as the sweaty, nervous passenger annoying Myrna Loy in the Airport film.)

And yet when It's a Mad Mad Mad Mad World premiered on network television around that time, Caesar shined as the most fascinating of the dozens of Big League comedians in that gargantuan comedy, playing a calm, cool, and reasonable man who, over the course of the story, becomes as manically obsessed as a heroin addict long overdue for a fix. In a picture full of broad character comedians the character arc of dentist Melville Crump was maybe the most nuanced.

Nevertheless, in the decades that followed Caesar was better known as the guy Carl Reiner based Alan Brady on in The Dick Van Dyke Show, or the egotistical star essayed by Joseph Bologna in My Favorite Year (1982), or the character of Max Prince in Neil Simon's play Laughter on the 23rd Floor. He certainly wasn't known for his roles in Stoogemania, The Great Mom Swap or Cannonball Run II.

Except for the barely released Ten from Your Show of Shows (1973), a hilarious but rudimentary compilation film, the comic genius of Sid Caesar has been painfully underacknowledged.

Thus, Shout! Factory's Sid Caesar: The Works is a major home video event. On five discs it compiles fourteen hours of great comedy from The Admiral Broadway Revue (1949) Your Show of Shows (1950-54), and Caesar's Hour (1954-57), along with hours of supplements, usually including writer Mel Brooks and writer-performer Carl Reiner among those hailing Caesar. Ten from Your Show of Shows is also included. 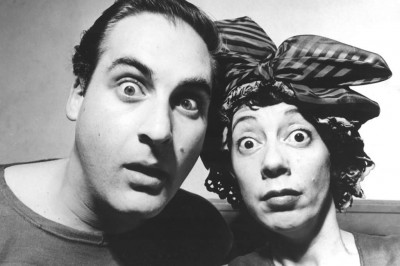 Sid Caesar (1922-2014), often working with Broadway director Max Liebman (1902-1981) honed his special gift for comedy in a nationally touring postwar service revue called Tars and Spars, after which he quickly rose up through the ranks of nightclubs, a few film roles (he turned down the lead in The Jolson Story, one of the biggest hits of the 1940s), and finally, in a Broadway revue entitled Make Mine Manhattan.

He made his television debut on Milton Berle's Texaco Star Theater but within months Liebman and Sylvester "Pat" Weaver (father of Sigourney) had created a show tailor-made for Caesar's unique skills in character sketch comedy: The Admiral Broadway Revue. Directed and co-written by Liebman, and co-starring Imogene Coca the series, broadcast simultaneously on NBC and the Dumont Network, was such a runaway hit that it was cancelled after six months: appliance company sponsor Admiral couldn't keep up with the demand for the TV sets the show generated.

Caesar wasn't out of work for long. The same team resurrected itself as Your Show of Shows, initially the second half-hour of a larger "umbrella" show called Saturday Night Review. After one season Your Show of Shows expanded to 90 minutes - all of it live.

Caesar and Coca were joined onstage by Carl Reiner and Howard Morris, and writers including Mel Brooks were supplemented with Neil Simon, Danny Simon (Neil's brother), Mel Tolkin and others. That series won numerous Emmys and was another runaway hit, so successful it essentially split into Caesar's Hour and The Imogene Coca Show, the latter, sadly, not a success. For Caesar's Hour Coca was replaced by Nanette Fabray (Beatrice Arthur also appeared occasionally), and Larry Gelbart joined the writers. (Selma Diamond also wrote for Caesar at some point, while Woody Allen wrote for some of Caesar's later specials, but none of the three original series.)

Caesar's shows were a sharp contrast to the ex-Vaudevillians, burlesque comedians and stand-up comics that dominated early television comedy. Caesar's style was, for the time, nearly revolutionary: character-based sketch comedy that avoided jokes or slapstick in the usual sense. His sketches were often quite long, some stretching to 30 minutes, and relied less on dialogue than pantomime (especially Caesar's reactions). The humor was typically derived from real human behavior and reactions to everyday life (a wife reluctant to tell her husband that she wrecked his car, for instance), though the various series also specialized in parodies of popular movies and TV shows. Caesar's art was, in one sense, a bridge between the best silent comedy and later sketch comedy that followed, from The Carol Burnett Show through Saturday Night Live.

The long list of supplements helps put the series into perspective, and exhibit its influence. Carl Reiner and Mel Brooks recall John Cleese's reaction to "This Is Your Story," a screamingly funny spoof of the popular Ralph Edwards' This Is Your Life. Cleese had to cover his eyes, afraid to watch it through to the end, he was laughing so hard. Reiner who, in the sketch, perfectly emulates the glibness of Ralph Edwards, had never actually seen "This Is Your Story" until he went to a screening of Ten from Your Show of Shows decades later. He recalls hearing an old woman with a high-pitched voice screaming with laughter; Reiner eventually realized it was him. Reiner, now slouch himself as a rising comedy star, willingly became second banana to Caesar because, he explains, Caesar was the biggest banana of all.

The remarkable longevity of many of those involved (Caesar, Fabray, Tolkin, writer Aaron Ruben all lived well past ninety, and nonagenarians Reiner, Brooks, and Neil Simon are still with us) helped keep Caesar's name and these various shows alive, appearing at retrospectives that would show many of the most famous sketches. Sid Caesar: The Works collects all this material and now fans of comedy can enjoy them at something akin to the leisurely, measured rate in which they were intended.

The five-disc set opens with Ten from Your Show of Shows, the feature compilation. While admittedly drawing from less-than-pristine kinescopes, it doesn't look like that feature has been remastered since the days of VHS, but in a sense it doesn't matter, as the sketches contained therein are mostly hilarious anyway. Most of the discs consist of additional sketches, with supplementary material. The Dolby Digital mono audio is fine, and the disc is region 1 encoded.

In addition to Ten from Your Show of Shows and about two dozen other sketches, interspersed are scads of extra features. These include The Sid Caesar, Imogene Coca, Carl Reiner, Howard Morris Special (1967); excerpts from Caesar's Writers, a 1996 documentary; The Chevy Show featuring Caesar; Mel Brooks: In the Beginning - The Caesar Years; a 90-minute Mel Brooks, Carl Reiner, and Billy Crystal Salute Sid Caesar At the Paley Center from 2014; and, from 1983, Nightcap: Conversations On the Arts and Letters (with Caesar, Brooks, and Reiner). A detailed, annotated booklet by Eddy Friedfeld, Caesar's biographer, is another huge plus.

A superb set, one of the best DVD releases of 2018, Sid Caesar: The Works is a DVD Talk Collectors Series title.