Sorry To Bother You 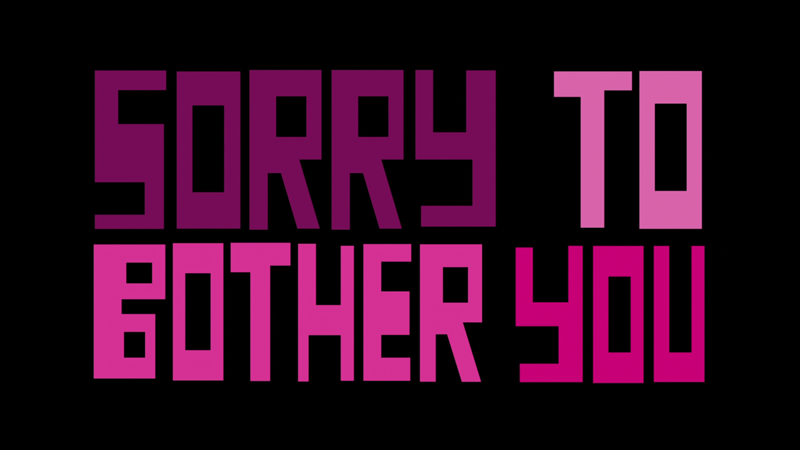 As hard as manual labor is, there are few jobs as bad as working in sales. Your customers usually view you with suspicious disdain, your employers value you only as much as your recent results and unless you have a product that truly sells itself, you are going to have to convince someone to part with their hard-earned money to buy something that they probably don't really need. If you've ever watch the Maysles brothers' Salesman, you know what a difficult life it can be. Now, try to make those sales on the end of a telephone line, and it's become that much worse. That's where Sorry to Bother You, the feature debut by Riley Boots, starts, but unless you've seen it or have had it spoiled for you, there is no way you have any idea where it's going to end.

Cash (Lakeith Stanfield, Atlanta) is a hustler who is struggling to make ends meet. He lives in his uncle's garage but is behind on rent, drives a beater he can't fill with gas and can't find a job. So he winds up in telemarketing, where he tries to sell books to people with little to no interest in what he's offering (in what is the first hint of Riley's imaginative style, as Cash literally drops into people's lives during his calls.) But when he learns a secret from an older coworker (Danny Glover) and discovers his "white voice" (provided by David Cross), things turn around in a big way, and he's on his way to sales success.

However, that's just the start. There's a lot more ahead for Cash, as he gets involved with Squeeze (Steven Yeun), who wants to form a union for the callers--who only make commission and get no benefits, tries to keep a happy relationship with his sign-spinning performance artist fiancee Detroit (Tessa Thompson), and aims for "Power Caller" status under the tutelage of Mr. ________ (Omari Hardwick), whose white voice is provided by Patton Oswalt (and yes, that blank there is intentional.) In the background of all this is a society that has gone off the rails (but not so far removed from current day America), as the top show on TV is the game show "I Got the $#!+ Kicked Out of Me", and people are signing lifetime contracts with WorryFree, a company that provides work, food and shelter, but no pay. You know, slavery. 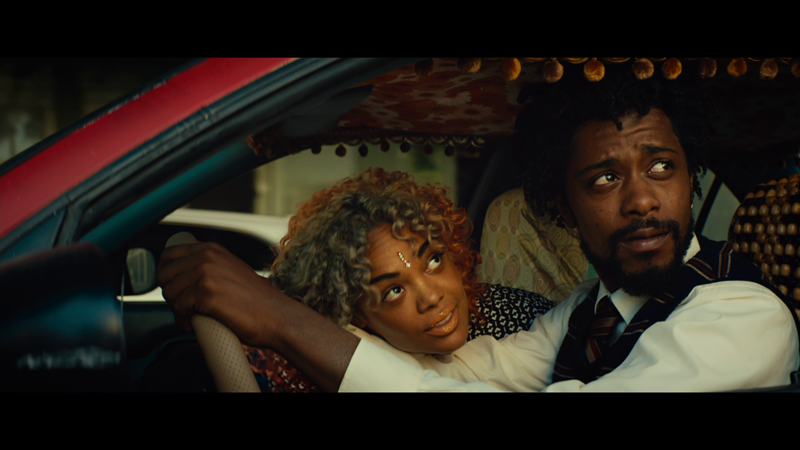 To go too far into the plot would be a disservice to anyone who hasn't seen the movie, as going in relatively cold will result in the best experience, but suffice it to say, Sorry to Bother You has a lot to say about capitalism, labor and society, and doesn't pull a punch along the way, while taking the story in some extreme directions. Directors are referred to as visionary all the time these days, but if anyone deserves that label, it's Riley, who has taken a very serious, real and important set of topics and created a film that is not only up to the task of tackling them honestly, but made it vibrant and entertaining at the same time. Yes, the places the film goes to as it works out the story are utterly crazy, and may break some brains in the process, but sometimes to make a point you have to take things beyond logic. It worked for Swift and his Modest Proposal and it works here for Riley.

It doesn't hurt that he's working with a remarkable cast, led by Stanfield and Thompson. Stanfield brings a blend of confidence and vulnerability that makes Cash believable, likable and worth pulling for, even when he may not be following the path the audience might be hoping for. Thompson is very much the opposite: a ethereal spirit, message-bearing earrings and all, who acts as the film's motivating animus and conscience to Cash. The similarities to Julianne Moore's role in The Big Lebowski may be somewhat simple, but it doesn't make Thompson any less a presence in this film (though certainly more of an important character.) They are accompanied by a host of great performances, including Yuen and Terry Crews (Cash's uncle), Jermaine Fowler as Cash's buddy Sal, Kate Berlant as Cash's manager, and Armie Hammer as the head of WorryFree, a role with obvious appeal (once you see him in action.) Of course, Oswalt and Cross are a blast, even if the voice mismatch joke is an obvious one, as they are not only funny but heavily meaningful to the film's message. They are joined by voice appearances by Rosario Dawson, Lily James and Laurence Fishburne (all of whom are better discovered than explained.)

The visual element that Riley orchestrates in Sorry to Bother You can't be overlooked though. Whether it's the visual transformation of Cash's home to illustrate his growing success, the use of animation, or the generally over-the-top aesthetics, this film is purposeful in what it shows the audience. Even something simple like Cash's motivating picture of his uncle (a wonderfully uncomplicated running gag) adds to the film's off-kilter feel. It all could have tipped over into pure nonsense (and some--many?--may argue the finale does) but it all makes sense in Cash's world. What starts off recognizable morphs into something uniquely different, yet the people we follow remain relatably human (sort of.) 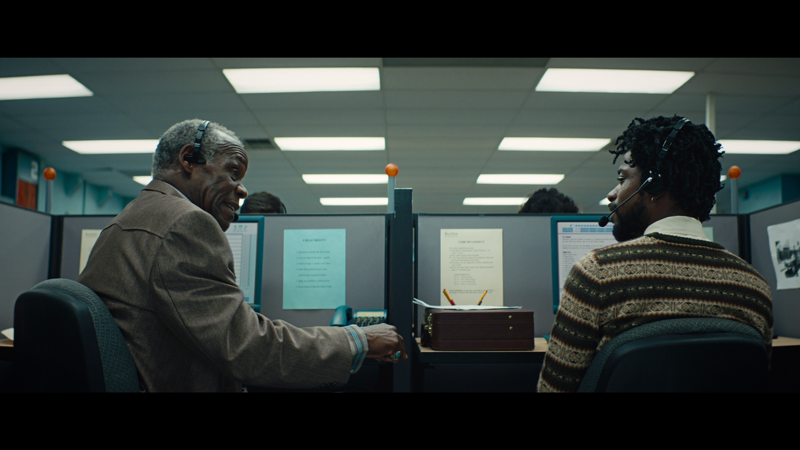 Sorry to Bother You arrives in a two-disc set (one Blu-ray, one DVD), packed in a standard-width keepcase, which is held in a slipcover that repeats the quote-heavy cover art. While it may be the poster art, it feels like it deserved something...more. The Blu-ray features an animated menu themed to fit the film, with options to watch the film, select scenes, check out the bonus features and adjust the set-up. Audio options include English 5.1 DTS-HD Master Audio and 5.1 Descriptive Audio, while subtitles are available in English SDH and Spanish.

The 1080p, 2.39:1 AVC-encoded transfer on this disc allows Riley's colorful, stylized collaboration with cinematographer Doug Emmett (The To-Do List, among many others) to really shine, with the proper color and level of fine detail to show off the film's elaborate lighting design, wardrobe and set decoration. From scene to scene, Sorry to Bother You is constantly changing its look, and the disc easily keeps pace, even in the film's darker moments, where solid black levels keep things visible (with some minor exceptions, which may have been done purposely to camouflage some of the more out-there effects work--considering how solid the rest of the presentation is.) Naturally, for a recent film shot digitally, there are no concerns about the condition of the image, and the transition to Blu-ray hasn't introduced any new problems.

It should be no shock that the sound on this film is strong and key to the film, considering Riley's past as a music artist and producer (Riley is a member of The Coup, a hip-hop group best known to many for the unfortunate timing of their exploding World Trade Center album cover.) The DTS-HD MA 5.1 track handles all the audio elements smartly, whether it's the powerful music cues, the space-defining atmospherics or the engaging special effects. Dialogue is crisp and easily understood at all times (an important factor considering the use of "voice") , while the prioritization in the mix is handled properly, particularly in the film's more chaotic moments. The low-end serves the music and effects well, building up the feel of the movie, while distortion is not a concern.

Riley provides a solid commentary track for his first feature film, offering background details, production info, and notes on influences and scenes that were cut, though at times he does get caught up in narrating. What's interesting is how he chooses to not explain some things in the film, chalking it up to the fact that there are mysteries in life. There's also something charming about how he admits he doesn't know the filmmaking terms for the techniques he used in the film.

In addition to the commentary, Riley takes part in the 11:55 "Beautiful Clutter with Director Boots Riley", which takes its name from a phrase he uses in the commentary. A concise overview of the film, it does cover some similar ground as the commentary, but goes over Riley's musical career, the influences that helped created WorryFree and the plan for full-frontal nudity in the film. If you want to get more into Riley's head as a filmmaker and artist, this featurette offers an in.

Also included is a gallery of 24 photos, which can be viewed manually or in a slideshow, with stills from the set and behind the scenes images with Riley.

Not listed on the box are the trio of promos, including the 2:28 theatrical trailer (one of the best previews in recent memory, capturing the feel of the film perfectly without giving much of anything away, not the least of which is the brunt of the plot), and a pair of promo clips, one with the cast of the film (1:52) and one focusing on "white voice", in which Cross and Patton have fun discussing their participation in the movie.

Wrapping up the disc is a trio of trailers for other Fox releases, while the package has a code for a MoviesAnywhere copy of the film. 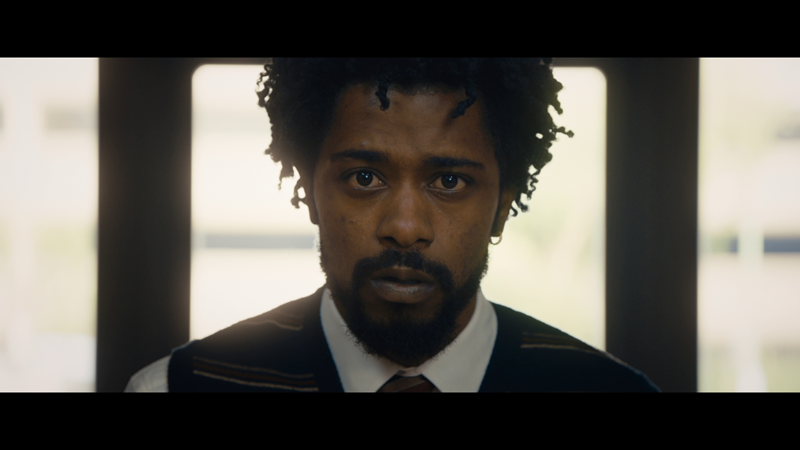 Sorry to Bother You is audacious and exciting, both "important" and fun, and is easily one of my favorite film experiences of this year from all angles. Some viewers won't be able to accept where the journey leads, but if you're on its wavelength, it's a heck of trip. Fox has brought the film home in great shape, and added a modicum of extras that let the filmmaker provide more of a look behind the curtain, which for a film like this is just what you want. Can't wait to see what Riley has up his sleeves next.
Francis Rizzo III is a native Long Islander, where he works in academia. In his spare time, he enjoys watching hockey, writing and spending time with his wife, daughter and puppy.Follow him on Twitter