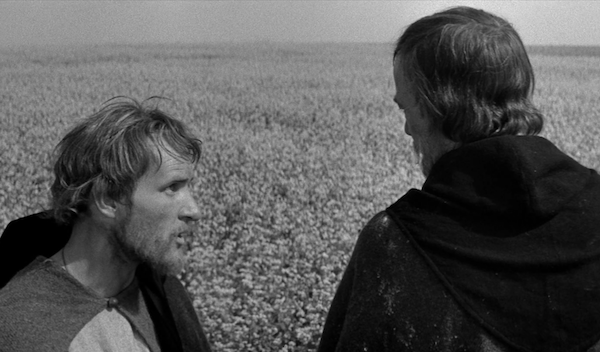 Andrei Rublev is exactly the kind of film that screenwriting teachers fear and loath. Its central conflict is thematic, rather than story-driven. Structurally, it is episodic, with only tenuous throughlines propelling viewers from beginning to end. It is centered around an essentially passive main character, who disappears from the narrative for many long stretches. And yet, Andrei Rublev is an unqualified masterpiece.

Completed and shown once in 1966, but not properly released until years afterward (with significant cuts), Andrei Rublev is the second feature film of Russian master Andrei Tarkovsky (Solaris, Stalker). Like Tarkovsky's later work, Andrei Rublev is imbued with a sense of visual poetry, realized through surprisingly intricate widescreen mise-en-scène, long takes, and eloquent tracking shots. However, despite its length (183 minutes in Tarkovsky's final cut, presented here; the 205-minute first cut is included as an additional feature), this film isn't as contemplative and -- let's face it -- as potentially sleep-inducing as Tarkovsky's later ruminations. There's always plenty going on.

Anatoly Solonitsyn, who would continue to appear in Tarkovsky films throughout the '70s, is featured here as Andrei Rublev. Rublev was one of the greatest painters of religious icons in 15th Century Russia, but Solonitsyn is never shown painting a single brush stroke. Instead, he is presented largely as a humble monk: thoughtful, kind, and sad. He wrestles with his religious faith and he wrestles with his faith in art, a struggle which Tarkovsky and Solonitsyn thankfully make quite compelling. Otherwise, we might have been stuck with three hours of moping.

In this way, the episodic structure of the film is ingenious. The experiences that Andrei has and the things that he witnesses give the viewer a guided tour of the hardships and odd wonders of the medieval world, pulling us through and pushing us forward. Tarkovsky mounts a mysterious pagan festival, full of fiery sacrifices and shadowy love-making, which draws Andrei's attention against his better judgment. (In a somewhat heavy-handed bit of symbolism, as Andrei is drawn toward a beautiful naked pagan woman, his cassock catches on fire, suggesting that hell's damnation lay at the end of this path.) In a later episode, Andrei finds himself in the middle of a raid on the town of Vladimir, spearheaded by a power-hungry prince and carried out by Tatars. It's the kind of scene that one expects from a grand historical epic, but Tarkovsky cares little for the spectacle of battle and keeps the focus on how these killings represent the ruthless brutality of those in power.

The film's final episode is likely its most famous, even though Andrei Rublev is essentially a bystander for most of it. Instead, Nikolai Burlyayev, who was the boy in Ivan's Childhood, drives this sequence as Boriska, a young man given the task of casting a bell for the Grand Prince. His late father was a bellmaker, and Boriska proclaims that his father passed along the secret of the trade to him. He begins the elaborate process of leading a team of bell-casters and other workmen to prepare the bell, sometimes acting like a little tyrant. After all, if the bell doesn't ring, they will all be executed. One can't help but see the parallels between the boy bellmaker's plight and that of a filmmaker, wrangling a giant crew to execute an artistic vision with the specter of failure and doom ever-present. Tarkovsky does an excellent job of building suspense throughout this episode, leaving the audience in the dark until the last possible moment as to whether or not Boriska possesses the "secret" of the bellmaker and as to whether or not the darn bell will ring.

It's a powerful culmination of the film's exploration of artistic talent, its mysterious nature, and the role that faith in that talent plays in the creative process. Tarkovsky is telling Rublev's story, but he also appears to be telling his own.

Unfortunately, this also carries over to the elements of government repression shown in the film, as Andrei Rublev was censored and banned by the Soviet government until unsanctioned screenings in France -- where the film was a hit -- pried the film from the grip of the powers that be. Arguments continue to be fought over whether the shortened 183-minute version presented here is truly an artist's reconsideration of his work, or merely the compromise Tarkovsky made under government pressure at the time. Either way, the power of Andrei Rublev is undiminished in the slightest.

The Blu-ray
Andrei Rublev comes in a digipak with overlapping hubs for the two discs, inside of a slipcase. The main Andrei Rublev cut of the film, as well as most of the bonus features are included on disc 1, while the longer Passion of Andrei cut of the film (see Special Features below) is featured on disc 2 by itself. A fold-out poster, featuring tech credits and an essay by J. Hoberman on the opposite side, is also included.

The Video:
Because Criterion's disc is loaded up with bonus features, the average bitrate for this AVC-encoded 1080p 2.35:1 presentation is lower than optimal. A comparison with other recent European Blu-rays reveals that they all seem to be working from the same restoration, with Criterion's image cropped a little tighter. When examined in detail, some of Criterion's encoding seems a little chunkier than the Russian Blu-ray too. However, when viewed at normal scale, in motion, it's not nearly so noticeable. In fact, if I hadn't taken a moment to look at the numbers, I would have assumed the bitrate was much higher. Purists might balk, but I stand by this presentation. It's great looking, with well-delineated contrast, strong clarity, and a pleasing filmic look.

The Audio:
A clean, clear restoration for this Russian LPCM mono audio mix (with optional English subtitles). There are no glaring flaws or distortions to distract from this relatively spare, but effectively atmospheric soundtrack.

(HD, 3:25:52) - This is the original cut of the film, initially released on DVD by Criterion nearly two decades ago. It is presented here in a relatively raw scan from a 35mm print that has lasered-on English subtitles. It's a significant upgrade from the original non-anamorphic DVD presentation, but the contrast and detail is unsurprisingly murkier than the restored shorter cut. There is not only more footage here (including more acts of violence and some nudity), but instances of different footage being used, and a different ordering of scenes in certain sequences. Both versions have been called "director's cuts" at different times over the years, and both versions are equally "valid" to this viewer's eyes, so it's nice to have them both included -- even if this longer cut could not be presented with the same picture quality as the final version.

Final Thoughts:
Andrei Rublev is a masterpiece which revives a bygone world and effectively dramatizes the struggle of an artist, while side-stepping rote cliché. It's long, old, and Russian, so your mileage may vary, but I found this to be one of Andrei Tarkovsky's most accessible films. Criterion has done a great job of souping it up with supplements that enrich and deepen the viewing experience. While it would have been nice to have a fully restored version of the film's longer cut, that lack is not enough to ruin the overall impact of this wonderful package. DVD Talk Collector Series.