Arrow Video // R // February 12, 2019
List Price: $39.95 [Buy now and save at Amazon]
Review by Stuart Galbraith IV | posted February 12, 2019 | E-mail the Author
Let's dispense with all the qualified, apologetic praise usually heaped on Horror Express (Pánico en el Transiberiano, 1972) diminishing its status as a good also-ran quasi-Hammer, and let's call it for what it is: one of the all-time great sci-fi horror films.

Lost amid the great glut of Euro-horror films made during the early 1970s, Horror Express had a strange history. It wasn't terribly successful in the U.K., it bombed in Spain, and seems to have had only a perfunctory release in the U.S. Soon after, it was at least perceived as being in the public domain, and began turning up everywhere. A lot. I recall one local station in my Detroit market running Horror Express almost once a week for several years, with only minor cuts. Widely released on videotape, Super-8 (sound), and 16mm, it was for a time practically unavoidable, and the cult following it enjoys today is primarily due to its post-theatrical availability rather than its original theatrical run.

Combining, mostly unconsciously, elements of John W. Campbell, Jr.'s Who Goes There?, later the basis for The Thing, the Nigel Kneale Quatermass stories, Hammer and Spanish horror films, and even characters from Hitchcock's The Lady Vanishes, Horror Express is far superior to almost all other British and European continent-made horror and science fiction films of its era. It's certainly better than almost all Peter Cushing-Christopher Lee pairings made after The Mummy (1959) with the exception of the interesting The Skull (1965). It's intelligent, scary, and highly entertaining, and holds up well today - a happy anomaly.

Severin released Horror Express to Blu-ray in 2011, a fine release. Arrow's new edition offers a superior, new 2K restoration and some new extra features, while repurposing much of Severin's material. 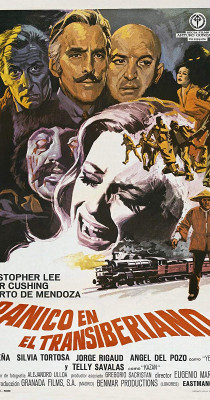 In 1906 Manchuria, anthropologist Professor Sir Alexander Saxton (Christopher Lee) boards the Trans-Siberian Express bound for Moscow, having discovered the well-preserved remains of a missing link in mankind's evolution. A thief, attempting to break into Saxton's crate, is found dead, his eyes turned completely white, like hard-boiled eggs. Royal Geological Society rival Dr. Wells (Peter Cushing), likewise curious about the crate's contents, later bribes Maletero (Victor Israel), the baggage man, to take a peek inside, and he too is found dead, eyes gone white, only now the creature, inexplicably still alive, has somehow freed itself from his crate.

As the train races along desolate, snow-swept Siberia, more passengers begin turning up dead, despite the best efforts of police inspector Mirov (Julio Peña), and aided by Saxton, Wells, and Wells's American colleague Miss Jones (Alice Reinheart). The Rasputin-like Father Pujardov (Alberto de Mendoza) considers the thing an embodiment of evil, though later covets the roving creature's growing power and intelligence. Eventually Saxton and Wells deduce the missing link, and the bodies it later takes over, are merely serving as hosts for an eons-old alien life form, one that absorbs all intelligence and memory from its victims through the eyes, transferring into fresh bodies as needed, thus making it an extremely dangerous threat to all aboard the train.

Two other blacklisted writers, Arnaud d'Usseau and Julian Zimet, in turn each took a stab at Horror Express's screenplay from Gordon's idea, with Gordon making uncredited contributions during shooting. That script, set shortly before the Russian Revolution, is surprisingly political for a cheap thriller, with its privileged, entitled train passengers generally treating the working-class characters with thinly-veiled contempt. In one scene Saxton regards the creature's victims up to that point as barely human: "A thief? A baggage man?" he sniffs. Lee plays his usual stuffed shirt persona but, rare for the actor, his character here actually humanizes over the course of the story. He's very good and so is Cushing.

Mostly though it's the screenplay's cleverness that makes Horror Express work so well. The alien creature believably eludes capture because the minds it absorbs provide it with the knowledge it requires to remain one step ahead for the entire story. Having surviving earth's entire history, it comes across human's a few short steps away from being able to launch vehicles into space, and it wants to get back home.

Except for the opening scenes and a brief cutaway to a remote station, the entire film takes place aboard the train, creating a growing sense of claustrophobia but also keeping production costs low. (It cost as little as $300,000.)

Subtle, intelligent touches abound. The audience learns very little about the alien, which claims it was accidently left behind, but its actions hint that this might not be entirely true, that it might have been left there purposefully, and that it may be malevolent and not merely trying to survive.

Besides Cushing and Lee, equally unforgettable is maniacal Father Pujardov, who fuses with the alien in the last third of the picture, becoming a genuinely unsettling, unique "monster." That character actually consists of two great performances, rolled into one: Argentine actor Alberto de Mendoza plays him onscreen but, equally important, his haunting voice is the uncredited work of the prolific Robert Rietti, which sounds similar to his dubbing of Adolfo Celi, the villain in Thunderball (1965).

Eugenio Martin's direction is very good, taut and varied, generating much suspense through his cutting, but even more significant a contribution is the eerie music, with that whistling motif guaranteed to stay with you for weeks, by John Cacavas. It's one of the best scores ever written for a horror film; his music makes the movie even scarier.

Severin's earlier Blu-ray release looked pretty damn good, but Arrow has gone one better with their new transfer, which has better color and exposes more frame area while maintaining the original 1.66:1 aspect ratio. Optional English subtitles accompany the uncompressed mono, though alternate audio options, such as the Spanish dub, are not included. Region "A" encoded.

New on this release are an audio commentary with Stephen Jones and Kim Newman; "Ticket to Die," an appreciation by Steve Haberman; "Night Train to Nowhere," an interview with filmmaker Ted Newsom about Bernard Gordon. From the Severin release are "Murder on the Trans-Siberian Express," an interview with director Martin; "Notes on the Blacklist," an interview with Gordon; "Telly and Me," a brief interview with Cacavas; and a rather fannish introduction by Chris Alexander. Regrettably, a great 1973 audio interview with Peter Cushing on that release is not included on the Arrow disc. A trailer rounds out the extras.