Shout Factory // Unrated // July 9, 2019
List Price: $26.99 [Buy now and save at Amazon]
Review by Stuart Galbraith IV | posted July 10, 2019 | E-mail the Author
One of the best and most emblematic science fiction films of the 1950s, This Island Earth (1955) is a title that, in just the past few years, seems to finally be gaining the respectability it has so long deserved. Though its story emphasizes its mystery elements in its first two-thirds, and blood-and-thunder sci-fi action thereafter, most of it is intelligent and adult, many critics wrongly labeling it a "space opera" primarily for kids. It certainly was undeserving of the "riffing" it got from the producers of Mystery Science Theater 3000, which used an edited version of This Island Earth for their 1996 theatrical feature.

Blu-ray editions released in France and Germany preceded Shout! Factory's new American Blu-ray. These generated some fan controversary, some complaining about their 1.85:1 widescreen aspect ratios while others found fault with the color timing. (This Island Earth was one of the very last films shot in three-strip Technicolor.) As a long-time admirer of the film - back in the 1970s, I ran my Universal-8 400-foot Super-8 sound version into the ground - I thought both Blu-rays looked pretty damn impressive, despite minor imperfections. Shout! Factory's release touts a new 4K transfer (though it's apparently not from the original black-and-white separations/original negative, if they exist, but rather from an interpositive of a composite element) but, honestly, I don't see a whole lot of difference among them; they all look good to my eyes, with little color timing differences. Shout! does offer the film in both 1.85:1 widescreen and, as a bonus feature, in a 1.37:1 "full frame" transfer. That's more or less how several generations of us first experienced the film, on television, though back in 1955, only the poorest, most Podunkville theaters would have shown it that way.

Probably the best news about this release is that the original Perspecta Stereophonic Sound has been restored and decoded by the great folks at 3-D Film Archive, though it's not the audio default and must be selected as an audio option before starting the feature. Perspecta wasn't technically true stereophonic sound, but rather it directed ("panned") sound effects, dialogue and the like to front-left, front-center, and front-right speakers. Its use in This Island Earth is startling effective for the most part, though the system does have a few drawbacks. 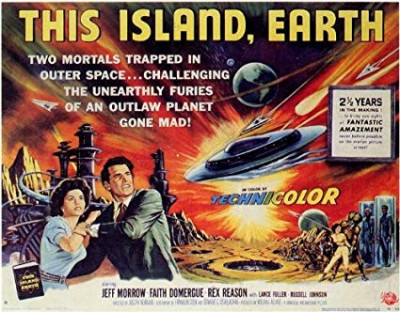 Based on Raymond F. Jones's same-named 1952 novel, the movie opens with scientist Dr. Cal Meacham (Rex Reason) flying back to his government-run laboratory when his Lockheed T-33 jet's engines fail. He's about to crash when a strange green glow engulfs his aircraft, taking control of and safely landing it.

Working with assistant Joe Wilson (Robert Nichols), Cal is attempting to find ways to convert or infuse ordinary lead with the properties of enriched uranium. From an unfamiliar department they receive electronic condensers far more powerful than any they've heard of, and after receiving a strange catalog (with metal, rather than paper pages) from the same mysterious department, curious Cal decides to order something called an "interocitor," though neither has any idea just what that might be.

The parts arrive and they build one: a refrigerator-size contraption with an upturned triangle-shaped television monitor mounted on top. When they turn it on, a man called Exeter (Jeff Morrow) congratulates Cal on having successfully passed his "test." He invites Cal to join a group of fellow research scientists at a secret location, urging him to board a private plane scheduled to land nearby that evening. By this point Joe Wilson wants nothing to do with Exeter. Deeply suspicious, he unsuccessfully tries to warn Cal off. Cal, however, can't resist.

Flown to a remote part of Georgia, Cal is greeted by another scientist, old flame Dr. Ruth Adams (Faith Domergue), though she feigns not remembering Cal and their brief romance. Taken to a southern-style mansion, Cal learns other top scientists from around the world have been gathered, hosted by Exeter and others who all have the same basic features: a shock of white hair and oversized foreheads. (The makeup lacks subtlety.) Exeter claims his unnamed organization promotes world peace, but Ruth and another scientist, Dr. Steve Carlson (Russell Johnson) believe their hosts are up to no good, and accuse them of brainwashing most of the other scientists.

(Spoilers) As Universal's advertising and trailer eagerly, disappointingly reveal, Cal and Ruth are eventually kidnapped by Exeter aboard a flying saucer and taken to his home planet, Metaluna, by this point in the final stages of an interplanetary war they're on the verge of losing to rival world Zagon. Cal and Ruth have been kidnapped to develop new sources of uranium to help maintain the planet's outer-atmosphere ionization defense layer. The arrogant leader of Metaluna, the Monitor (Douglas Spencer, a far cry from his funny reporter character in The Thing), orders the earthlings' brains cleansed as well but, by this point, Exeter is having second thoughts about the way Cal and Ruth are being treated.

Universal got into the ‘50s sci-fi boom with It Came from Outer Space (1953), by far their best science fiction film of the decade. Shot in 3-D, that film was also a huge commercial success, prompting another big 3-D hit, Creature from the Black Lagoon (1954). However, the producer of those and almost all of Universal's sci-fi films of that decade, former actor William Alland, either didn't quite understand what made those pictures work or simply lost interest in the genre. The same year This Island Earth was released Alland also produced the first Black Lagoon sequel, the unimaginative retread Revenge of the Creature; and Tarantula, an only moderately effective imitation of Warner Bros.'s far superior Them! (1954). His second Black Lagoon sequel, The Creature Walks Among Us (1956) proved thoroughly wrongheaded while The Mole People (1956) crossed over into the realm of the ridiculous. The Deadly Mantis (1957), cocked to the brim with grainy stock footage, was even worse. The Land Unknown (also 1957), was dumb in myriad ways but entertaining. Soon after he moved to Paramount.

This Island Earth is the odd man out among these titles. Though Universal greatly exaggerated the scale of the production ("Two-and-a-half years in the making!") it was somewhat more expensive than the others, filmed as it was in Technicolor and boasting elaborate, expensive-to-mount visual effects. Top-billed Jeff Morrow had appeared in several big films just prior to this, notably in a juicy villain part in The Robe (1953), but was never a star in the usual sense. Faith Domergue was more famous for her association with Howard Hughes and the long, troubled production of her starring vehicle Vendetta (1950), though she had appeared in several A-list pictures shortly after that, notably the excellent film noir Where Danger Lives (1950). But her career was clearly on a slow, steady downward slide. Rex Reason was one of a dozen or so leading men under contract at Universal, a cache of homegrown talent that included Rock Hudson, Tony Curtis and others. Reason, not a bad actor but lacking their charisma, was lost in that herd.

Ironically, This Island Earth is a much better film before Exeter and his cohorts are revealed as aliens from another planet. The opening scenes in the lab with only Cal and Joe are the most interesting, with a little envelope of super condensers kickstarting an escalating series of mysteries and growing suspense. Once in Georgia, Exeter treats the scientists like honored house guests yet there's an undercurrent of dread, each fearing they're being held captive and might not make it out alive.

Exeter is warm and friendly, but also cautions Cal against straying outside their mutual agreement, such as fraternizing in secret with Ruth and Steve. Jeff Morrow's performance is a bit overly theatrical, but his morally conflicted alien ranks among the most interesting characters in ‘50s sci-fi.

The Monitor: It is indeed typical that you Earth people refuse to believe in the superiority of any world but your own. Children looking into a magnifying glass, imagining the image you see is the image of your true size.
Dr. Cal Meacham: Our true size is the size of our God!

"Our God is bigger than your God!" Spoken like a true scientist!

And then there's the Metaluna Mutant (or, as it's called in the film, a "mu-TANT"), an extravagantly ugly humanoid bug monster. ("It's like your insect life on earth. Larger, of course, with a higher degree of intelligence.") After the Creature from the Black Lagoon and Godzilla it may be the most iconic ‘50s sci-fi monster, but unlike the Creature it's not remotely logical, but nightmarish. Obviously shoehorned into the plot to give the film a monster to stick on the posters, the Mutant is at once absurd and unforgettable.

In short, the weakness of the script in the last-third of the story is, ironically, also one of its strengths. As a child watching This Island Earth the outer space stuff, the material I really wanted to see, is a long time coming, and then crazily rushed. (The scenes on Metaluna should have taken up 35-45 minutes, instead of the breathless ten or so they do.) But as an adult I can't get enough of everything before the Metalunians flying saucer turns up. After that it's all eye candy, one great special effects sequence after another, but nearly as juvenile as a sci-fi serial.

(See above for more about various Blu-ray editions of This Island Earth.) Shout! Factory's 4K remaster of the film mostly looks terrific, though to my eyes not a lot different or better than Blu-ray versions released several years ago in France and Germany. If anything this release's color seems very slightly desaturated, delivering in all the funky Metaluna scenes and those involving the "green glow," but subtly muted in, say, the early laboratory scenes, which looked a bit more like 3-strip Technicolor on the European editions. The film was originally released almost everywhere in the U.S. in widescreen, 1.85:1 thereabouts. That's how it's presented here, though for those who remember the film mainly from TV airings, a 1.37:1 unmatted transfer is also available. Besides the excellent 2.0 (mono) DTS-HD Master Audio, there's a restored decoding of the original three-track Perspecta mix. As noted above, it's highly effective in directing sound effects and dialogue, but there's also a modest downside: all the panning of effects and dialogue does tend to drown out the underscoring at times. I liked it enormously but wouldn't fault those who prefer the 2.0 mono mix. Region "A" encoded.

Supplements include an audio commentary track by Academy Award-winning visual effects artist Robert Skotak, a longtime expert on the extensive spfx of This Island Earth; an audio commentary with film music historian David Schecter who, using re-recorded music track excerpts goes into great detail about the film's score, like most other U-I titles a kind of round-robin affair, with various uncredited composers contributing to its whole. Also included is an interview with Italian filmmaker and sci-fi fan Luigi Cozzi; and a wonderfully detailed text supplement about Perspecta and its restoration on This Island Earth. Also included is an extended older documentary, "This Island Earth: Two and a Half Years in the Making"; War of the Planets, two 1958 Castle Films abridged versions for the home movie market, the 50-foot silent version and the 200-foot sound edition. There's also director Joe Dante's "Trailers from Hell" segment about the picture, a trailer, and still galleries. Whew!

Not the greatest science fiction film of the 1950s but certainly one of the most enjoyable, This Island Earth finally gets the remastered/extras-loaded release it deserves, making it a DVD Talk Collectors Series title.