Kl Studio Classics // Unrated // July 9, 2019
List Price: $29.95 [Buy now and save at Amazon]
Review by Stuart Galbraith IV | posted August 12, 2019 | E-mail the Author
The third of star James Stewart's seven collaborations with director Anthony Mann, Thunder Bay (1953) is, arguably, the least significant, but it is an entertaining if dated picture. Only this and The Glenn Miller Story (1954), their biggest hit, weren't Westerns, and Thunder Bay is practically a Western in modern dress. The film is also significant due to the manner in which it was initially released. More on that later. 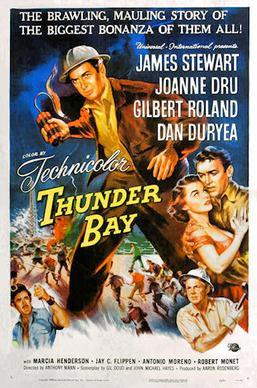 Oil rig engineer Steve Martin (Stewart) is broke but has big dreams of building a spectacular rig off the Louisiana coast in the Gulf of Mexico. With similarly penniless partner Johnny Gambi (Dan Duryea), they convince oil company president Kermit "Mac" MacDonough (Jay C. Flippen) and his fussy adviser (Harry Morgan) to listen to their scheme. They sweet-talk a boat ride from shrimper Dominique Rigaud (Antonio Moreno), though his daughter, Stella (Joanne Dru), cynically but accurately suspects they don't even have enough cash to pay for the boat ride, a sentiment shared by her suavely handsome fisherman boyfriend, Teche Bossier (Gilbert Roland).

"Mac," who sees in dreamer Steve a younger version of himself, agrees to finance the highly speculative venture to the tune of $1 million, this despite his shaky position at the company he founded following several years of heavy losses. When Steve and his crew begin dynamiting the Gulf, the local shrimpers are understandably upset, forming a growing rift between the two factions. Further alienating the fishermen is Gambi's attraction to Francesca (Marcia Henderson), Dominique's youngest daughter. Free-wheeling Gambi talks of marriage, but doesn't appear remotely serious about their relationship.

A hurricane, an attempt by one fisherman to blow up the rig, and a looming deadline and dwindling finances threaten to put the kibosh on the entire operation, though an obsessed Steve is ready to finish the job all by himself, if that's what it'll take.

Had it been set eighty years earlier, with Steve a silver miner and the shrimpers cattlemen, Thunder Bay could just as easily have been a Western, and a fairly routine one at that. The tensions between the locals and the invading oil riggers is trite, made more so by the subplots of Gambi and Francesca, and later Steve and Stella. However, the relationship between Steve and Mac plays well and Stewart and Flippen are especially good here, especially when Mac admits to privately bankrolling Steve venture when the board turned the idea down flat.

The long-term damage to the environment by fossil-fuel drilling, oil spills, and its contributions to climate change were unknown in 1953, but watching it today Thunder Bay plays a little weird. When, for instance, the fishermen protest Steve's casual use of dynamite charges in the Gulf, his irritated reply is, "Aw, that dynamite doesn't hurt the shrimp at all!" Yeah, sure, Jimmy.

Exteriors were mostly shot in and around Morgan City, Louisiana, a picturesque location, with interiors done back on the soundstages of Universal. The film's best sequence, a hair-raising fight on the rig during the hurricane, was shot in a big water tank and holds up well today.

Thunder Bay is notable as one of the first widescreen releases, and with stereophonic sound to boot. It was filmed September-November 1952, and photographed for 1.37:1 standard format framing, but by the time the picture was wrapping postproduction, in early 1953, everything in Hollywood had changed. This Is Cinerama, which opened in September 1952, and the 3-D Bwana Devil, premiering at the end of November, begat a technological revolution. Before the year was out, 20th Century-Fox announced plans to begin making movies in CinemaScope, and the major studios began shooting their own 3-D movies for release beginning the following spring. The 3-D format sputtered out in the wake of CinemaScope and other big screen formats, but by mid-1954 or so virtually every film theater in the U.S. and much of the rest of the world was reconfigured to exhibit wide screen movies.

Pictures like Shane, War of the Worlds, From Here to Eternity, and Thunder Bay, shot in the old, standard aspect ratio, were cropped to various degrees and exhibited in widescreen. Wings of the Hawk, shot in 3-D, appears to have been Universal's first widescreen release, at 1.85:1. Thunder Bay, filmed much earlier, was similarly cropped to 1.85:1, while future non-‘scope Universal titles would be standardized to 2:1.

Wikipedia and other sources get little bits of information wrong. It was not released in anamorphic wide screen, but simply cropped at the top and bottom of the 1.37:1 frame, usually in the projection plate rather than on the film itself (a hard-matte). Further, Wikipedia and other sites suggest that Thunder Bay "was originally planned to be photographed in 3-D." But, considering Thunder Bay completed production several weeks before Bwana Devil even premiered, that seems extremely unlikely.

It does appear, however, to have been Universal's first stereophonic release, beating It Came from Outer Space to theaters by several weeks. However, given that stereophonic equipment was not at all commonplace in movie theaters until the dissemination of CinemaScope in late-1953 through 1954, one guesses Thunder Bay got the stereo treatment in only the biggest movie houses in the biggest cities, and probably only exhibited in stereo sound via an interlocked system, i.e., the stereo soundtrack on a separate piece of 35mm film, as it predates CinemaScope's magnetic sound-on-film format by several months.

Kino's 1.85:1 release of Thunder Bay is a tad disappointing and, one guesses, from an older master. The image lacks the sharpness and vibrancy one might have expected, yet the image is rather tepid throughout, with blah color and a general lack of fine definition. Memory is a tricky thing, but I recall broadcast versions looking brighter with richer color. The DTS-HD Master Audio 3.0 stereo, limited to left-center-right speakers, is fairly good for its era, though it pales compared to the outstanding mix for Universal's near-concurrent It Came from Outer Space. Thunder Bay's comes alive here and there, with some nice directional effects and dialogue. Optional English subtitles are included on this region "A" encoded disc.

Supplements include an audio commentary by Toby Roan, and a trailer.

Not great either as a movie nor a Blu-ray but entertaining and of modest historical importance, Thunder Bay is Recommended.