Kl Studio Classics // Unrated // September 10, 2019
List Price: $29.95 [Buy now and save at Amazon]
Review by Stuart Galbraith IV | posted September 13, 2019 | E-mail the Author
A huge-scale epic by 1942 standards, Reap the Wild Wind has enormously impressive production values, an all-star cast including John Wayne, and many impressive action-set pieces. Set in the Florida Keys of the 1840s, the story concerns marine salvage operations of fully-loaded merchant ships wrecked on reefs, often the result of monster hurricanes. This aspect of the film is colorful and exciting, all produced on an enormous scale. However, this Cecil B. DeMille production also tries hard to imitate the success of Gone with the Wind (1939). Paulette Goddard, one of the three finalists that didn't get the role of Scarlett O'Hara in that film (the others being Jean Arthur and Joan Bennett), here portrays a nearly identical role, a Southern belle torn between two lovers: hot-headed ship's captain Wayne, and a wily lawyer, played by Ray Milland. Their casting generates negligible chemistry; Wayne himself was most unhappy playing second banana to Milland, while Milland was hardly the go-to guy for strapping (if intellectual) he-men types. 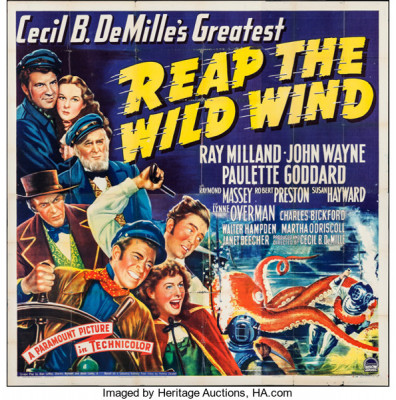 Knocked unconscious by duplicitous first-mate Mathias Widgeon (Victor Kilian), ship's captain Jack Stuart (Wayne) lies helpless as Widgeon deliberately crashes Jack's ship against the unforgiving reefs. Loxi Claiborne (Goddard), orders her salvage company's Captain Philpott (Lynne Overman) to take her out to the sinking ship, but King Cutler (Raymond Massey), who conspired with Widgeon, is are already there, he and his men greedily unloading her rich cargo while ignoring the injured Jack and other trapped sailors. Loxi and Philpott rescue Jack, nursing him back to health at her Southern mansion.

She falls in love with him, naturally, while her cousin Drosophila (Susan Hayward) has eyes for Dan (Robert Preston), King's brother. Accompanied by their aunt (columnist Hedda Hopper, in her last acting role), the young maidens head for Charleston, Loxi hoping to persuade Jack's company lawyer, Steve Tolliver (Ray Milland), to forgive the disaster and reassign Jack to the Southern Cross, a vessel touting the latest technological innovation: steam power. Steve, however, also sets his sights on Loxi, even halting the marriage of her and Jack in the middle of their nuptials. Cutler, meanwhile, would like to see both men dead.

Reap the Wild Wind may have cost as much as $4 million to produce, about the same as Gone with the Wind, and ten-to-twenty times the cost of the average major studio feature. It's certainly all up there on the screen: huge sets, vast acreage of elaborately costumed extras, lush three-strip Technicolor cinematography.

All the seafaring scenes are impressive. Mostly achieved through cutting between elaborate miniature effects and soundstage water tank sets, the scale and detail of the production design and set decoration is remarkable, especially on big projection screens. Of this method, i.e., not shooting on real seas, this is best of its type I've ever seen, and that includes Warner Bros.'s celebrated swashbucklers of the same period.

These play to director DeMille's strengths, who favored tableaux-style compositions to a lot of moving camera and quick cutting. The images are strong, though the screenplay, as Variety would call it, is sheer hokum.

In attempting to duplicate the success of Gone with the Wind, Reap the Wild Wind goes for very much the same look once ashore, with lots of fiddle-dee-deeing, and comedy relief from the help, here with Louise Beavers playing the Hattie McDaniel-styled black maid. Pictures like this and GWTW are rarely singled out for their African-American stereotypes, but there are numerous references to "darkies" here and, curiously, the fact that all but one of the black characters are, implicitly, slaves, is simply ignored.

At least two accidents are caught on-camera. Early in the picture Milland (or his stunt double) throws Goddard (clearly her) overboard, but her body visibly slams against the lip of the deck on the way down. Far worse, in his fight scene with Victor Kilian, John Wayne connected with the actor's face, and Kilian lost an eye as a result. Looking at the film, this appears to be the very first punch Wayne throws as Kilian. Viewed one frame at a time, Wayne's facial expression goes from violent determination (acting) to shock and horror at what's he done, all in about half a second.

In retrospect, it seems almost perverse that DeMille cast Wayne as the heavy, and foppish Milland as the hero, with Wayne a veritable punching bag for Milland to beat up just to prove his manhood. It doesn't help that Wayne's character is a sorehead, with the script revolving around a series of misunderstandings leading to tragedy.

Milland isn't bad as the hero, but he's miscast. Even in his much smaller part, Robert Preston comes off better. Milland had been in pictures since the dawn of sound, but didn't start peaking until Billy Wilder's The Lost Weekend (1945), when he was middle-aged. From there he segued into character parts (and ditched the toupee along the way), in which he was often excellent, and even directed a number of films himself, several of which are surprisingly good. As for Goddard and Hayward, the latter has a natural charm, and notably youthful compared to how she's remembered today, mostly for melodramas made much later. Goddard is like she was in most of her films outside her work with then-husband Charlie Chaplin: adequate but far from great.

A Paramount Production, Reap the Wild Wind looks spectacular, the three-strip Technicolor photography really ablaze here, the video transfer possibly derived from the original black-and-white camera negative separations, as the alignment of the three colors is perfect throughout; even the dissolves and other opticals look excellent. The DTS-HD Master Audio (mono) is likewise very good. Optional English subtitles are provided on this region "A" disc.

Supplements are limited to a trailer and animated image gallery.

From a production standpoint alone, Reap the Wild Wind is a visual feast for the eyes, with many exciting set-pieces. It's much less successful with its sappy romance, and the casting of the three leads is problematic. Still, Highly Recommended.