Kl Studio Classics // Unrated // November 5, 2019
List Price: $19.89 [Buy now and save at Amazon]
Review by Stuart Galbraith IV | posted November 11, 2019 | E-mail the Author
A remarkable little British film, a postwar thriller with slight science fiction elements, Seven Days to Noon (1950) follows the frantic (yet also, in the British manner, most orderly) search for an atomic weapons scientist who threatens to explode central London with a nuclear device the size of a portable typewriter.

Produced and directed by John and Roy Boulting, the unusual film has no stars, to the point where the actors aren't even listed in the opening credits, and has a strong semi-documentary approach that anticipates not only the later Quatermass TV serials and films, but may well have influenced early ‘50s American science fiction as well. Indeed, the 1953 Ivan Tors production The Magnetic Monster is practically a remake.

Though largely forgotten today, the film was a highly-regarded novelty at the time of its release, even winning an Academy Award for Best Story. The writers, adapting Fernando Josseau's book Un Nazi en Manhattan, were professional and personal partners Paul Dehn and James Bernard. Dehn, of course, would return to nuclear bomb story elements in Goldfinger and the four original Planet of the Apes sequels, while Bernard would later become the house composer in all but name for Hammer Films. 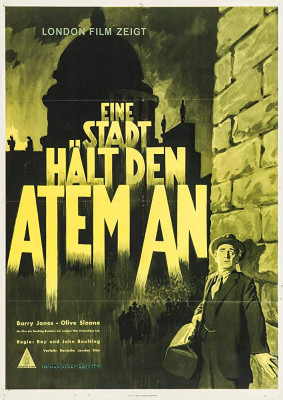 A letter from a Professor Willingdon arrives at 10 Downing Street, informing the Prime Minister (Ronald Adam) that he's stolen a nuclear warhead from his weapons development facility at Wallingford Research Centre, and that the device will be detonated the following Sunday at noon unless the government declares a halt to stockpiling nuclear weapons.

The letter is forwarded to Detective Superintendent Folland (André Morell, who'd eventually play Quatermass in the TV version of Quatermass and the Pit). Inquiring at Wallingford and later the professor's home, Folland learns the professor has indeed gone missing, but that his absence is not unusual. The scientist's assistant, Lane (Hugh Cross), and adult daughter, Ann (Sheila Manahan), gradually suspect something serious has happened. Reverend Burgess (Wyndham Goldie), the local vicar, is at first reluctant to reveal personal information about one of his parishioners, but admits Willingdon had been recently suffering from depression.

Meanwhile, the scientist, the subject of an ever-intensifying manhunt, takes a room in Mrs. Peckett's (Joan Hickson) boarding house. She, however, becomes concerned about his late-night pacing, his room directly above hers, and mistakenly comes to believe that he's the "landlady murderer" also sought by the police. He evades arrest, eventually befriending an aging former chorus girl-turned-prostitute, Goldie Phillips (Olive Sloane). As the clock ticks down to Sunday noon, can Willingdon be located before it's too late?

Handsomely produced and beautifully photographed by Gilbert Taylor, Seven Days to Noon has myriad nice touches throughout. Like the later Gojira (1954), the evacuation of London draws parallels to that city during the Blitz. Londoners stand in long lines on platforms waiting for trains to move them to the safety (?) of the countryside. The city's prized possessions, including the Crown Jewels in the Tower of London and treasures from its museums are carefully packed up and shipped out. Soon, with most of the population evacuated, London looks like New York in The World, the Flesh, and the Devil (1959), an eerily deserted concrete landscape. The Boulting brothers and DP Taylor make excellent use of London's many landmarks, as well as ordinary streets and Underground stations. The film has one rather extraordinary miniature special effect, at the 24:45 mark.

The one minor criticism I find with Seven Days to Noon is that it works better before Willingdon is actually shown and his plight dramatized. Told from the vantage point of Morell's character, over the course of the investigation the audience gradually learns more and more about the scientist, learning bits of information at the same time Folland does. He's a more interesting character unseen, and the semi-documentarily told search for him is entirely realistic and believable.

Once introduced, the movie shifts slightly more toward ordinary drama, if very well done drama, and Barry Jones, Olive Sloane, and Joan Hickson are all excellent. Jones was a familiar face who straddled a career between British and Hollywood film and television work, appearing prominently in the American films Plymouth Adventure (1952), Demetrius and the Gladiators (1954, as Claudius), and Brigadoon (1954), among others. Later he did shows on both sides of the Atlantic as well, including The Saint and The Outer Limits. Olive Sloane was another non-star, having spent her long career in minor and bit roles; Seven Days to Noon was her only major credit, though she did have more prominent parts following its success. Ronald Adam, another familiar face as the prime minister had a storied career flying Sopwith Camels during World War I before he was shot down (possibly by Richthofen). He rejoined the RAF during World War II and was a Fighter Controller during the Battle of Britain, his soothing voice reportedly instrumental to calming pilots. Onscreen, he makes an unusually authentic prime minister.

Besides busy André Morell and Joan Hickson, other busy talent familiar to American audiences turn up in small but memorable bits, including Geoffrey Keen, Marianne Stone, Victor Maddern, Sam Kydd, and Joss Ackland. As was done soon after on The Day the Earth Stood Still, at least two genuine radio announcers, the BBC's Frederick Allen and NBC's Merrill Mueller, add to the verisimilitude.

Filmed in black-and-white standard frame, Kino's Seven Days to Noon Blu-ray, licensed from Studio Canal, looks perfect, with an extraordinary level of fine detail visible, while the contrast and inky blacks are excellent. The DTS-HD Master Audio track (mono) is fine, and optional English subtitles are provided on this region "A" disc.

A must-see, Seven Days to Noon will be a real find for many. A DVD Talk Collector's Series title.