On one hand, it's a very ‘80s Hollywood attempt to emulate certain aspects of Hong Kong-made martial arts movies of the previous decade, but also to bring to it an offbeat comic sensibility plus scads of state-of-the-art special effects. It's not entirely successful, with many amusing aspects always on the cusp of being overwhelmed by its barrage of visual and aural stimuli, but those good qualities are pretty entertaining, particularly star Kurt Russell's swaggering, memorably goofy would-be hero. 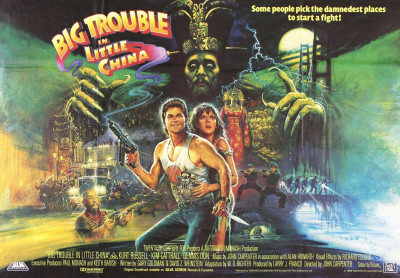 Russell plays truck driver Jack Burton, hauling pigs to market in San Francisco's Chinatown. There he gambles the night away with friend and restaurant owner Wang Chi (Dennis Dun). To ensure Wang pays his $1,000-plus debt to Jack, the pig hauler accompanies Wang to the airport, where Wang plans to meet his mail-order bride, Miao Yin (Suzee Pai). At the gate, however, a Chinese gang called the Lords of Death kidnap the would-be bride and Jack and Wang give chase.

The pursuit leads back into Chinatown, where Wang directs Jack to drive his rig down a narrow alley, into the bowels of the exotically mysterious community. There they encounter a battle between rival secret societies, climaxing with the appearance of the "Three Storms," supernatural warriors, and their apparent leader, ancient wizard David Lo Pan (James Hong).

Jack and Wang reconnoiter at Wang's restaurant, where they're joined by Gracie Law (Kim Cattrall, dazzlingly beautiful in an early role), Miao's attorney (or maybe the friend of another woman at the airport; I never did understand this plot point); her journalist friend Margo (Kate Burton, daughter of Richard); Wang's friends Eddie Lee (Donald Li) and wily old magician Egg Shen (Victor Wong), whose day-job is driving a tourist bus around Chinatown.

All commence to rescue Miao from the clutches of the seemingly immortal Lo Pan, who lives in mostly subterranean Chinatown, a maze chockful of otherworldly monsters, torture chambers, and other theme park ride-like thrills. Alice in Wonderland meets Enter the Dragon.

The best thing about Big Trouble in Little China is Russell's always cocky but forever incompetent, bigger than life hero, whose bravado has been likened to John Wayne by many reviewers, though his persona is really closer to Ward Bond (and more the offscreen Bond at that). He's Sylvester Stallone's Rambo, but played for laughs.

Partly the movie seems to be trying to be a hipper, modern take on the classic movie serials made by Republic and Universal back in the 1940s, with their escape-recapture-escape structure. In other ways it's reminiscent of Roger Corman's The Raven (1963), especially with the dueling wizards, here pitting Egg Shen against Lo Pan, much like Vincent Price and Boris Karloff in that film, and with Russell's character functioning in a way not dissimilar to Jack Nicholson's young hero in Corman's film.

Carpenter stated in interviews his intention, in part, was to inverse the traditional roles of Caucasians and Asians, with Wang Chi the real hero of the piece, while Jack is more the comical sidekick without ever realizing it. These intentions are apparent in the film, but perhaps not obviously so to less sophisticated audiences expecting a more conventional action-adventure film, with a conventional action-adventure hero. No doubt its dizzying blend of martial arts, comedy, fantasy, and horror left many viewers nonplussed.

And while Big Trouble in Little China is probably the best Hollywood-made martial arts type film, like virtually (if not literally) all of the others, the martial arts action doesn't really play because it's shot and cut in the western-world style. Hong Kong-made martial arts movies generally shoot their fight scenes like Fred Astaire dance numbers: wide angles and longer cuts, the better to appreciate the incredible gymnastic-like grace of performers like Bruce Lee and Jackie Chan. Here, shots are framed too tightly and quick cuts undermine the physical prowess of the stunt work.

The picture became one of longtime character actor James Hong's signature roles, but equally memorable is Victor Wong's Egg Shen, who's like an old Chinese Popeye the Sailor Man, a character perhaps inspired by Yuen Siu-tien from the Drunken Master films.

John Carpenter is a real master of ‘scope framing, and the filmed-in-Panavision Big Trouble in Little China is no exception, the Blu-ray really sparkling from one end of the frame to the other. I didn't see Fox's 2009 Blu-ray release, but this certainly impresses. A "Collector's Edition," this release has the feature on one disc and most but not all of the extra features on the other. The DTS-HD 5.1 audio is as excellent as the picture quality, and optional English subtitles accompany this Region "A" disc.

A two-disc set, Disc One includes two new commentary tracks, the first with producer Larry Franco, the second with special effects artist Steve Johnson, while a third, older track features Carpenter and Russell. More audio: the film's score in DTS-HD 5.1 is offered on an isolated track. Also on Disc One are trailers and TV spots; a gag reel; a music video; and deleted and extended scenes.

One of a kind, Big Trouble in Little China has many fine qualities and some that director John Carpenter doesn't quite pull off, but this new Blu-ray release, for its sparkling transfer and overwhelming volume of extra features make it a must-have. Highly Recommended.