Kl Studio Classics // Unrated // January 7, 2020
List Price: $19.99 [Buy now and save at Amazon]
Review by Stuart Galbraith IV | posted January 27, 2020 | E-mail the Author
Though today regarded as a high-water mark in camp, one doesn't necessarily need enjoy Cobra Woman (1944) in those terms. The picture is really part of a line of movies evolving from several directions at once, all with exotic locales with fairy tale-like yarns bordering (or crossing over into) fantasy.

Jon Hall became a star in John Ford's epic South Seas melodrama-disaster film The Hurricane (1937), the actor following that up with movies such as South of Pago Pago (1940), Aloma of the South Seas, and The Tuttles of Tahiti (both 1941), after which Hall moved to Universal. Meantime, the lavish British Technicolor production of The Thief of Bagdad (1940), featuring Indian actor Sabu, was completed in Hollywood due to the wartime bombing of London and that, too, proved a big success. The following year, Universal enjoyed good box-office with the now-forgotten South of Tahiti, featuring recently-hired contract player Maria Montez, a thickly-accented glamour girl from the Dominican Republic.

All these trends coalesced in Arabian Nights (1942), Universal's first Technicolor production, which starred Hall, Montez, and Sabu. Budgeted at just under $1 million, the picture earned nearly $3.5 million, a huge take by early-‘40s standards. The three actors were reunited for White Savage (1943) and again for Cobra Woman, by which time Montez had earned the title "Queen of Technicolor." More movies followed, though Sabu, after becoming an American citizen, joined the Army Air Forces and served as a tail gunner for the rest of the war.

While certainly Cobra Woman can be enjoyed as camp, the picture isn't that much more patently ridiculous than the better pictures that preceded it, as movies like The Hurricane and The Thief of Bagdad were similar western-world confections of imagined far-flung corners of the world, just classier. Cobra Woman is, in its own way, quite enjoyable in the same manner as Ray Harryhausen's later fantasies (such as his Sinbad movies). The production design and cinematography remain lavish, even by today's standards. 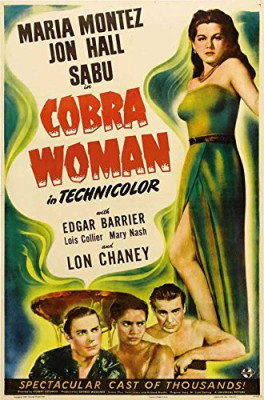 Ramu sets sail to rescue his would-be bride, with energetic companion Kado (Sabu) stowing aboard. Mistaking Naja for Tollea in a sacred bathing area, Ramu jumps in the water, swims over to Naja, and kisses her passionately, impudence Naja finds appealing. Elsewhere, the elderly Queen (Mary Nash), conspiring with Hava and young maiden Veeda (Lois Collier) hope to replace Naja with Tollea, the true heir, she having been first-born.

Needless to say, Cobra Woman is not a documentary. One can marvel at its incongruities: a Spanish-accented ("Giff me that cobra juwl!") South Seas priestess and her white and American-accented maidens; Naja's hilarious phallic snake-dance, with Montez prancing about a big, phony snake, inexpertly but gleefully condemning dozens of her subjects to be sacrificed to the cobra-god, residing listlessly in an extravagant tent. But, really, is it any more ludicrous than dozens of arguably better films?

In its favor, Universal packs a lot of excitement into Cobra Woman's pleasingly compact 71-minute running time. Its utter lack of pretension is, indeed, one of its strengths. The studio was aiming for nothing more or less than pure entertainment, and in that regard Cobra Woman succeeds just fine. Indeed, as lowly Universal ramped up its game slightly with tonier productions, the Montez-Hall films play well where its other ambitious color productions (Phantom of the Opera and, yuck, The Climax) falter pretty miserably.

The picture looks more expensive than it was, the studio-wide efforts of the production designers, cinematographers, and special effects people (including many vivid, if not really convincing matte painting) create the kind of other-worldly exotic escape war-weary audiences craved.

Licensed from Universal, Kino's Cobra Woman looks outstanding in its original 1.37:1 standard format. I was lucky enough to see Cobra Woman some years back at the American Cinematheque, presenting an original 35mm nitrate print. This transfer is as good or better than that was, the studio clearly having access to the original black-and-white separations as the high-def transfer is, effectively, flawless. The DTS-HD Master Audio (mono) is also clean and clear. Optional English subtitles are provided on this Region "A" encoded disc.

There's but one supplement, but it's a good one: an audio commentary by film historian Phillipa Berry. Unlike too many Kino commentaries, where experts "wing it," Berry comes prepared with a carefully-considered, thoroughly researched, screen-specific script more in line with the great tracks of Tom Weaver and Tim Lucas. It's worth a listen.

Fun for viewers of all ages, Cobra Woman is Highly Recommended.