Criminal (The Concrete Jungle), The

Kl Studio Classics // Unrated // February 18, 2020
List Price: $29.95 [Buy now and save at Amazon]
Review by Stuart Galbraith IV | posted February 19, 2020 | E-mail the Author
The Criminal (1960) is a British film starring Stanley Baker. Though it's not much more or less than a well-fashioned crime melodrama, it was directed by exiled Hollywood Blacklist victim Joseph Losey, who'd soon move on to more prestigious British films, often in collaboration with Harold Pinter and/or Dirk Bogarde, as well as Baker on occasion. Both the Blu-ray's audio commentary track and the very well-written review by colleague Cinesavant contextualize The Criminal within the scope of Losey's career, pointing to themes and concerns present here and in other Losey films. That may be, but where they see much innovation I see it mainly as a well-made genre film, well above average, certainly, but not especially innovative and certainly no groundbreaker. 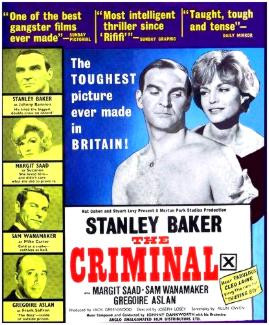 Johnny Bannion (Stanley Baker) is the king of his cellblock, the evening before his release on remission for good behavior. During mess, a stool pigeon, Kelly (Kenneth Cope), is re-imprisoned, and Johnny orders dim-witted Clobber (Kenneth J. Warren) to have Kelly beaten. The head prison warder, psychotic Mr. Barrows (Patrick Magee), is fully aware that Johnny ordered the assault, but does nothing.

Outside the prison gate the next morning, Johnny is greeted by slick American criminal Mike Carter (Sam Wanamaker, another blacklistee), who's anxious to learn details of Johnny's three-years-in-the-making Big Score, a racetrack robbery certain to net 40,000 pounds. Following a raucous party arranged by Carter, where Johnny's ex-girlfriend Maggie (Jill Bennet) makes a scene, Johnny finds her ex-roommate, Suzanne (Margit Saad), in his bed. Johnny would rather spend his first night out of stir in blissful solitude, but soon falls for the attractive blonde German.

The racetrack robbery unfolds as planned, but Johnny is arrested immediately after secretly burying the loot in an empty field -- someone has double-crossed him -- and he's sent right back into stir, only to find his power there seriously eroded and the hierarchy altered for a newer breed of villains.

One of the top British stars, Welsh actor Baker had been in films since the late 1940s, but mostly played villains in supporting parts until the success of Hell Drivers (1957). On the heels of actors like Leslie Howard, John Gregson, James Mason and even fellow Welshman Richard Burton, Stanley Baker stood out from this pack of "theatrical knights" (as David Thomson put it) with his rugged, working-class looks (his father was a coal miner) and contempt for the Britain's elite. He looked like a truck driver, a foot soldier, or a hardened criminal.

One really great scene in The Criminal finds Johnny locked in a cell with two tough Irishmen intent on beating him to a pulp. He's clearly outmatched with nowhere to run. Yet Johnny bluffs a kind of hardened confidence, contemptuously glaring at and insulting each man in turn. And, through this bluff and bravado, it works. Against all odds, by the end it's the two Irishmen lying in agony on their cots, not him. An actor as good and with the physicality of Baker could believably pull off scenes like these, where actors like Richard Burton or James Mason would have looked ridiculous.

Like Hell Drivers, The Criminal is packed to the gills with familiar character actors though not the boatload of future stars found in that earlier picture. Armenian Grégoire Aslan plays the Italian "prison baron"; Edward Judd the inexperienced new guard; Nigel Green the muscle for Wanamaker's gangster; Noel Willman the ineffectual prison governor; Redmond Phillips its doctor; Rupert Davies a guard; Derek Francis a priest; Laurence Naismith a detective; and John Van Eyssen, Patrick Wymark, Murray Melvin, Paul Stassio, among the cellblock prisoners. Although Wanamaker is a bit too flamboyantly oily as Carter, Patrick Magee is wonderfully subtle, typecast yet again as a character barely able to contain a psychotic underbelly of gleeful sadism.

Anglo-Amalgamated, the British company that produced The Criminal, had long been known for low-budget second features, often filmed, as this was, at Merton Park Studios. The company ground out genre films like the Carry On comedies (through the mid-‘60s) and their wonderful little series of Edgar Wallace mysteries. Around this point they upped their game a bit, allying with Michael Powell for Peeping Tom (also 1960) and this. Losey had not yet established himself as a major director in Britain, despite some success, and was still making genre films like The Criminal. (Only a few years before, he had been fired from Hammer's ultra-low-budget X the Unknown at the insistence of American star Dean Jagger.)

Rather, it was Stanley Baker's skyrocketing box-office weight that undoubtedly influenced The Criminal's bigger-than-usual production values (including its marvelously authentic prison block set) and the free hand largely given to Losey. Both disliked the script, early drafts of which were written by Hammer's Jimmy Sangster. In rewriting the piece, Alun Owen so deemphasizes the heist that the movie audience hardly sees any of it at all. Rather, the emphasis is wisely focused instead on Baker's character, who's the center of almost every scene. The movie's portrait of a once-powerful hood who discovers too late that there's no honor among thieves is a familiar trope of such films, but rarely is it told as good as The Criminal does.

Cinesavant, in his review, notes the film's similarity with Japanese gangster films and, indeed, the resemblance is striking. Baker's is very much like the characters played Ken Takakura, Bunta Sugawara, and others in Toei- and Nikkatsu-produced (especially) gangster melodramas, which almost invariably revolve around mid- and lower-level soldiers to bosses unworthy of their loyalty, they willing to betray this trust on the slightest of whims. Johnny's meticulous plans include generous shares all around, but everything blows up in his face because the men at the top of this criminal food chain greedily insist upon more. (Carter self-consciously smokes using a cigarette holder, a sure indicator.)

One of the picture's most unsettling moments occurs when Johnny learns he's bought out others in on the heist for hay pennies on the pound; those who foolish refuse his terms are violently bumped off. Wisely, Losey shows none of this; instead the audience looks to Johnny reaction when he learns of Carter's ruthlessness. Similarly, the ambiguity of Johnny's relationship with Suzanne is well-handed. Right up to the end, neither Johnny nor the audience is quite certain whose side she's really on.

Kino's Blu-ray of The Criminal remastered in 4K and licensed from Studio Canal, looks great. Though the title elements are a trifle soft (as with most other Anglo-Amalgamated titles, it appears), the main feature, in 1.66:1 widescreen and black-and-white, looks nearly flawless, with inky blacks and great contrast throughout. The audio, DTS-HD Master Audio mono, is also good, and optional English subtitles are provided, useful for catching all the prison/criminal lingo. Region "A" encoded.

Extremely good for what it is, The Criminal is Highly Recommended.